Dream-Folk husband and wife duo Wolf & Moon make their return with their latest single ‘A Tape Called Life’. We caught up with Dennis and Stefany to find out more.

First up, tell us bit about yourselves - who are Wolf & Moon, and what were you doing before making music together?
We are Dennis and Stefany, a year before we started the band we met in Utrecht (Netherlands), where we were both living at that time and became a couple.

Stefany had just finished conservatory and was making music as a solo artist before we started Wolf & Moon. Dennis studied Industrial Design and was in several bands, but nothing too serious. He had a small company with his friends building apps & websites for customers and he was focusing more on design. Stefany who loves adventures came up with the master plan to start a band so that we could travel the world together and make music.

Who did you take inspiration from?
When we met we discovered that we had a couple of favourite artists in common. We share big love for Feist - she is probably our biggest inspiration. But also we like Bon Iver, Angus & Julia Stone.

Why the name ‘Wolf & Moon’? What do you stand for?
Mmmh, these are two different questions. To answer the first: Stefany had a little birthday party on a boat and Dennis brought a guitar. We were jamming a bit and then Stefany started jaming something with ‘wolf and moon’ in it. From that moment on we knew that this should be the name of the band. It just came to us so to speak. What we like about the name is that there are 2 wildly different things that somehow create this super nice picture together. One is an animal, one is’ an astronomical body orbiting Earth ‘ (wikipedia). And it tells a kind of story or at least it does to us. It is not necessarily that one of us is the wolf and the other is the moon. Although many people think that.

To answer your second question: We stand for chill vibes, barefoot, daydreaming.

How would you describe your musical style?
In short, we call it ‘dream folk’ - which means dreamy sound layers, chill melodies and folky duets vocals and guitar.

If you could collaborate with any living artist, who would you love to work with?
We would love to collaborate with Leslie Feist and Justin Vernon (Bon Iver) and to have the four of us collaborate in any kind of way would be a dream. 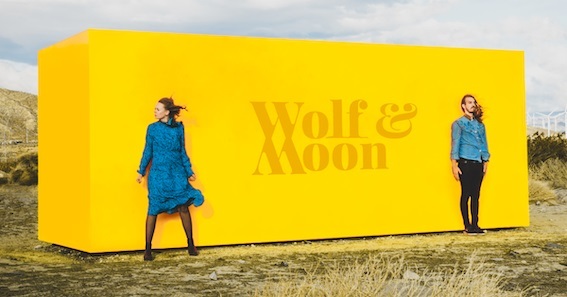 Tell us about your new single ‘A Tape Called Life’. What’s it about?
“Everything used to be better in the old days”… that’s what people like to say. We are wondering if that is that really true - and even if it was, it would be too depressing to believe because the past is never coming back.

All we got is now and there is so much to experience in life. The song is about the balance of being in the now and dreaming about a future.

How does ‘A Tape Called Life’ represent you?
I guess it shows that we are optimists. We always want to believe that everything is going to be alright in the end. It also shows our lust for life and adventure, ‘we still got so much, so much to see’ is two fold, we still got so much, is about appreciating what we have and so much to see flips the script and makes it about adventure.

What are your hopes for ‘A Tape Called Life’?
We hope that we can bring a big smile on peoples faces, especially during these times. We shot a music video in quarantine at home and we are basically reliving our childhood in it. While we are currently stuck at home in our imagination we are going on big adventures. That’s what kids do and they seem to be happy, right?**

What are your other plans for what’s fast becoming a crazy year?
We are looking forward to the release of our second record in September! We really hope that we can play live concerts again, we never had such a long break from playing live. So we will bring a lot of energy to the stage. We will be playing in the UK first week of Sept, can’t wait for it! If all turns out the way we hope though.

Finally, if you could go back in time and give yourselves one piece of advice, when would it be and what would you say?
Dennis’ answer: I like who I’ve become so this wouldn’t work in the way that the Butterfly Effect would change everything and I might not meet Stefany and become total a-hole or anything. etc. going back to the past and giving advice can be dangerous according to some movies. If that had no effect I would say ‘less computer games, more guitar practice, buddy!’

Listen to Wolf & Moon on SoundCloud below. For news, head to wolfandmoonmusic.com.