Trio tick.tick.tick. is Ross Garren, Eric Hall, Dean Anshutz. They’ve just released their eponymous debut EP of eclectic instrumental music made while physically distanced in Los Angeles, CA, Youngstown, OH and Hoboken, NJ between May and July of last year. We caught up with them to find out more.

Instrumental lo-fi through a nostalgic lens.

First up, tell us a bit about yourselves - who are tick.tick.tick., and what were you doing before making music together?
We consider ourselves a fictitious band in the real world – or a real band in a fictitious world. It depends on the day.

Before this endeavor we were all touring with bands and working in studios with people in the outside world.

Who did you take inspiration from?
Who: Mort Garson, The Ventures, Santo and Johnny, Mark Mothersbaugh, Brian Eno, Suzanne Ciani, Delicate Steve, Ratatat, and Phillip Glass to name a few.

Why the name ‘tick.tick.tick.’? What do you stand for?
The name was inspired by a fascination with the cellular automation visuals created by Conway’s Game of Life.

Evolution via collaboration is the through line in our music and visual creations. Input an idea into the machine and observe its evolution.

How would you describe your musical style?
Instrumental lo-fi through a nostalgic lens.

If you could collaborate with any living artist, who would you love to work with?
Oh boy, the list is long but I think we would like to be under the tutelage of Mark Mothersbaugh.

Tell us about your first EP, tick.tick.tick.. What’s it about?
In retrospect, it’s about the necessity of staying connected. After being forced underground by the pandemic, it started as a way for the three of us to collaborate and make fun music. It became a key ingredient (along with completing jigsaw puzzles with my wife and re-watching classic tv shows) to maintaining my mental wellbeing. The songs became a reason for us to communicate regularly.

It also felt like a forward motion during a period of uncertainty and waiting. To pay homage to the current ways we are able to stay in touch with the people that enrich our lives during this bizarre time, we are using retro technology and nostalgic imagery. It’s part kitsch, part dystopian, part utopian. All three to portray the moods that reflect this tick in time.

When did you write it and where did you record it?
The songs were written and recorded while being physically distanced in Los Angeles, CA, Youngstown, OH and Hoboken, NJ between May and July of 2020.

How does the EP represent you?
It does good job of highlighting our collective curiosity and esoteric interests. 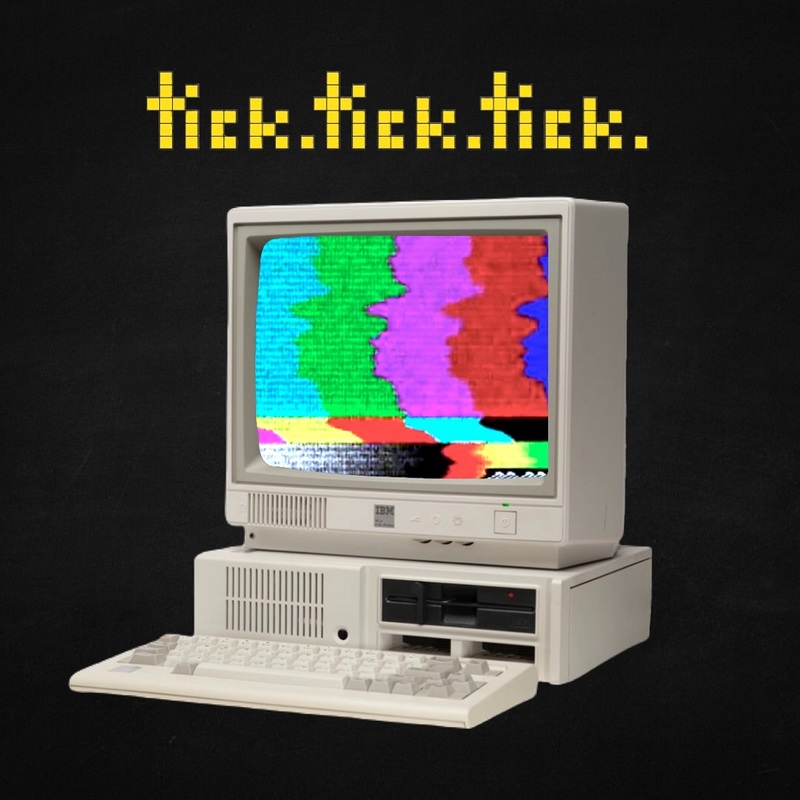 Can you talk us through each track?
‘tick.tick.tick.’ (intro) - a pompous fanfare fit for the most strident of minor league mascots. Great Job!

‘bit.quest.’ - music that would be played from the cassette deck of a DMC DeLorean on a long stretch of highway late at night. A lo-fi mesmerizing groove and slinky steel guitar melody calms the nerves and steadies the hand.

‘sally.stutters.’ - what if The Ventures scored the classic NES game Skate or Die? It’d probably sound like this glitchty, fuzzed out and reverberated drum basher. This tune will blow the dust out of your cartridge.

‘daily.routine.’ - a vibraphone and a Farfisa organ drop acid in the basement of an old industrial building. This song sounds like their transcendental journey. Side effects include: increased heart rate, sensory distortion, paranoia, hallucinations and euphoria!

What are your hopes for the EP?
We’d like to collaborate with creatives in other mediums such as film, dance, podcasting and visual arts. To have the music compliment and combine forces with another creation is always exciting. But if nothing else, we hope people will enjoy it enough to give us a reason to make more.

How’s the rest of 2021 shaping up for you?
It’s hard to say just yet, but we are optimistic for damned sure.

Finally, if you could go back in time and give yourselves one piece of advice, when would it be and what would you say?
Nothing. I’d be too worried about screwing up the space-time continuum.

This coverage was created via Musosoup #Sustainablecurator.