Acclaimed Dublin folk quintet The Eskies return with their second album, And Don’t Spare The Horses, on Friday, December 1st. We spoke to singer Ian Bermingham about their latest long-player and career so far.

We tend to veer towards the darker side of subject matter so there’s plenty of woe, betrayal, conflict, upheaval, rebellion, love, loss, fear and anger.

First up, tell us bit about yourselves - what first got you into music?
It’s quite different for each of us, I suppose. For me, it was listening to music in the car when I was a kid, singing harmonies to things! Big deal for me was joining a choir when I was six or seven. Singing with a big group like that, being exposed to some of those big thunderous, frantic, dramatic arrangements of people like Bach or singing Handel’s Messiah at Christmas with 100 or so other singers as a boy of eight or nine was all fairly spine tingling stuff.

There’s no turning away from that once you’ve experienced it, especially at such a young age. Being part of something that size. Something so much greater than the sum of its parts. Awesome.

How and when did you form the band? What was it that brought you together?
We had all played in bands before and all done quite a lot of gigging. Most of us had played in bands since we were sixteen or seventeen so by the time we got around to this band we had a fair idea of what we wanted to do. We were very lucky because we had a sort of fantasy list of good friends that we would like to play with and everyone was up for it.

We all knew each other’s style at this stage and more importantly knew each other to be good fellas and good craic. By the time we started playing together, it was just a matter of letting go and enjoying making music together. Going down the proverbial rabbit hole.

Were there any particular bands or artists you took inspiration from to form your musical and thematic style?
There have been far too many people who have (and continue to) inspire(d) us to really go into naming people as far as musicianship and song craft goes etc. but when it comes to our own musical style, I think we’re quite insular. I know myself that a big part of what kind of music I wanted to write was based on what I wanted to hear but hadn’t been able to find anywhere as opposed to wanting to emulate another bands sound or style.

How would you describe your style?
It’s an awkward one. Some of the songs definitely fall under the remit of ‘folk’ as they’re stories but in terms of how it sounds, it’s a big manic mess of gypsy, Yiddish, klezmar, rag-time, swing, dixieland, rock and blues!? 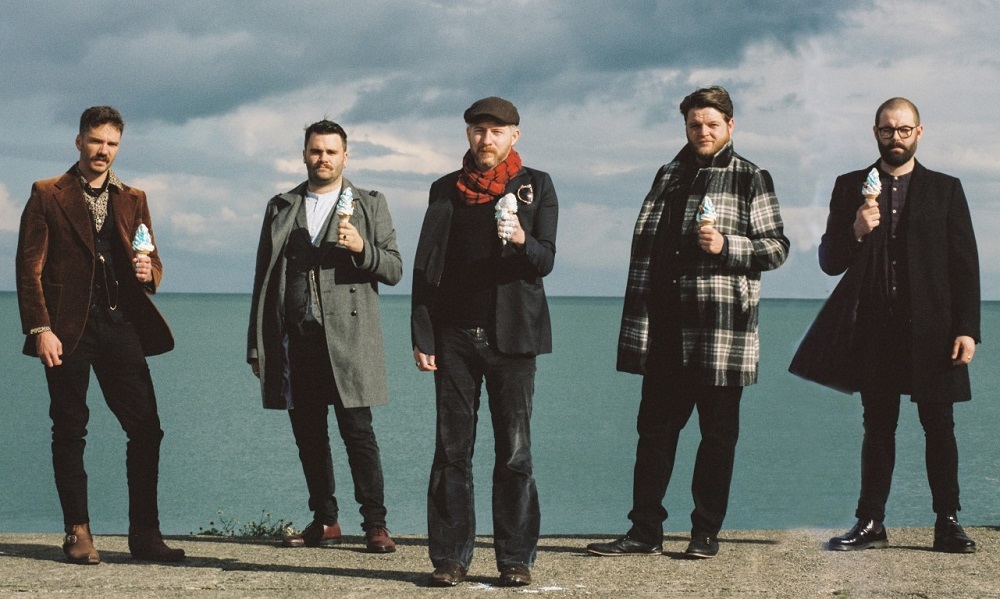 Tell us about your second album And Don’t Spare the Horses. What’s it about?
We tend to veer towards the darker side of subject matter so there’s plenty of woe, betrayal, conflict, upheaval, rebellion, love, loss, fear and anger. Usually all wrapped up in tongue-in-cheek irreverence. We like to take the dark stuff, blow it out of proportion and have a good bloody shout about it or a good bloody laugh at it.

When did you write the album and where did you record it?
It all happened very quickly this time around. We booked the studio before we had the album finished. We released our first album in 2015 and the subsequent two years have been very tour intensive so it doesn’t always leave a lot of headroom for new music. Booking the studio time was a way of saying “ok, you’ve all these half formed ideas and little pieces of music lying around. Go do something with them NOW”. That meant that, unlike the first album, we were still sussing some of the songs out by the time we went into studio which was very exciting!

There was only one place we wanted to record it and that was at Orphan Studios, Inchicore, Dublin with our dear Captain; Gavin Glass.

How does it build on your debut album, After The Sherry Went Round?
Some songs it feels like we’ve gone further down the rabbit hole that we threw ourselves down with the first album but there are also songs on there that would never have gone onto the first album.

Dynamically it’s much broader and thematically I think it’s a good bit braver. There are things that we couldn’t do at the time that we wrote and recorded the first album that we’ve made attempts at this time around.

Early on, we were writing exclusively for live shows but with this album there’s a sense of “ok we’ve got an hour and a half or whatever of live material, we can write things that we wouldn’t play at a sweaty, shouty gig” so we’ve gotten a bit braver in that sense.

Do you have a fondness for a particular song when playing live?
We always, always love when people sing back at us! There’s some new album songs that we’ve already folded under the excitement of keeping to ourselves and started playing live. ‘I’m Not Sorry’ and ‘The Man Who Ran’ are great because people sing them back at us! ‘Shame’ is deadly because it’s such a dancer, people fling themselves around to it but then on the flip side is ‘Building Up Walls’ which people go quiet and listen to, which is a new and exciting experience for us!

Also caught a couple of people singing along to that one which we absolutely love because it’s a different kind of song to most of our usual kind of fare.

If you could collaborate with any living artist, who would it be?
That’s an easy one, for me - Neil Hannon.

Finally, if you could go back in time and give yourself one piece of advice, when would it be and what would you say?
Ooh good bloody question. That’s a tough one. I’m not really one for looking back but if you were to force my hand and I had to go somewhere I would go back five or six years ago to when this band was in its infancy and say “don’t worry, it’s going to be great fun, say yes to as much as you can, enjoy it and relish the crap gigs as much as the great ones. The great ones couldn’t be as great without the crap ones, they’re just a different kind of fun and they’re all bringing you somewhere that you’ll enjoy”.

Watch the video for ‘All Good Men’ on YouTube below. For news and tour dates go to theeskies.com.