Sunset Jet is an alt-rock band founded by Brad Meechan, Dan Webb, Jonathan Sutherland and Marcus Breese on the Isle of Man in 2018. They recently had a run of 11 gigs over the Isle of Man TT to crowds of bikers, and released one of their live favourites - ‘Live at the Masquerade’. We caught up with the band to find out more.

‘Live at the Masquerade’ is about living a lie to achieve what you think are your goals, and the repercussions that go with that.

First up, tell us about yourselves - what led you teaming up as Sunset Jet?
We’re essentially an internet band, Marcus moved to the Isle of Man in 2017 and put out an ad on social media for bandmates, Jonathan responded and they had a few jams bonding over The Cure and Foals. Marcus then bumped into an inebriated Dan one evening who offered to play drums for them.

At the same time, Brad and Dan had been playing in another band together which was stagnating and both had left without telling the other. Brad had been putting out social media posts of his solo stuff and Marcus got in touch to reel him in. We had our first practice in March 2018 and first gig in June .

Who do your take inspiration from?
We’ve got varied musical tastes but wanted to combine them and see what music we could come up with whilst playing the gig circuit on the Isle of Man. Dan likes a mixture from Kula Shaker and Foo Fighters, to Miles Davis and Koji Kondo. Marcus prefers glassy/angular stuff like The Cribs , Foals, and Warpaint. Jonathan is a big fan of Bombay Bicycle Club, The Cure and Rod Stewart; whereas Brad takes inspiration from The Beatles, Arctic Monkeys, The Strokes.

Why the name ‘Sunset Jet’?
We were put under immense pressure when our rehearsal was interrupted midway through by someone we’re now reliably informed is a substance addict. He offered us a gig and insisted we have a band name by the next morning so he could put out a press release. We then wasted the rest of our rehearsal time coming up with horrendous names like ‘Weekend Romeo’, ‘Bank-Holiday Lothario’, and ‘The Dead Hand Gang” only for Brad to come up with the name ‘Sunset Jet’ on his drive home.

We all agreed it’d do until we could think of something better, 13 months later we’ve never seen the bloke again and the gig never materialised.

If you could collaborate with any living artist or band, who would you choose?
Brad - The Marsicans.
Jonathan - Bombay Bicycle Club.
Marcus - Foals.
Dan - Stewart Copeland or Josh Homme. 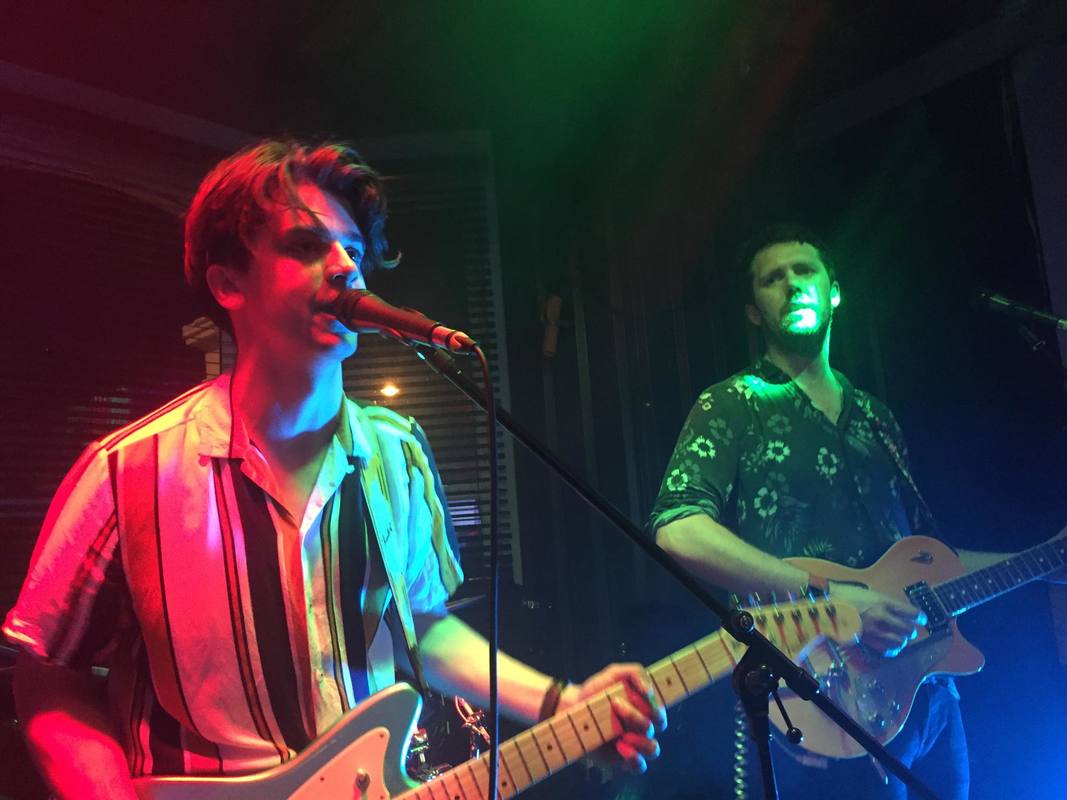 Tell us about your single ‘Live The Masquerade’, what’s it about?
Basically it’s about living a lie to achieve what you think are your goals, and the repercussions that go with that. In the song, the subject is essentially lying to get his end away which is something a lot of people have experience with.

When did you write ‘Live The Masquerade’, and where did you record it?
‘Live The Masquerade’ has been a work in progress for about two years. Brad chipped away at it every now and again and once SJ took off he felt he could show us. We don’t really remember it being introduced it’s just always been there.

How does ‘Live The Masquerade’ represent your style?
It’s a good bouncy tune and our live set closer. After getting badgered for ‘Wonderwall’ or ‘Mr Brightside’ all evening it’s good to mislead to your audience and hit them with one of your own after promising them one of the aforementioned tunes. It’s class to play live, you can really let rip and it gets a good reaction out of whoever we play it to even if they haven’t heard it. We often see people trying to sing along despite not knowing the song.

What are your hopes for ‘Live The Masquerade’?
We just want people to enjoy it. It’s often the highlight of our set seeing people lose their sh!t to a tune that they’ve never heard of. If it gets picked up by a a big radio station or festival that would be a bonus.

What other plans do you have for the year?
We have a few more singles lined up to be released which we’re currently putting the finishing touches to. We’ll also be looking to tour around the UK, if anyone’s interested please hit us up.

Listen to ‘Live at the Masquerade’ on SoundCloud below. For new and tour dates go to the Sunset Jet Facebook page.