Half Thai, half Trinidadian songstress Sunaree is on a mission to use muic to help young people who don’t feel like they fit in to feel more secure in themselves. We chatted about how she made the leap to move from Thailand to London and her new single - a remix for Post Malone’s hit ‘Rockstar’.

I came out here alone without knowing anyone in London but I always look at the bright side and always tend to find a solution to any troubled times. I’m all about the positive vibes.

**First up, tell us bit about yourself - what first got you into music? **
I was a super shy kid with absolutely no self confidence at all. If you saw my pictures when I was around 11-13 you’ll get what I mean haha I got bullied a lot during those times because I was different and looked different from everyone else at school so I turned to music to express myself and from there I started to own my sh!t :).

Were there any particular bands or artists you took inspiration from to form your musical and thematic style?
Absolutely, I’m a big fan of Sade, Grace Jones, Rihanna, Stevie Wonder, Diana King, Michael Jackson. All the greats. I do listen to a lot of Morlum which is traditional north eastern Thai music as well. So there’s a hint of that in my upcoming music.

You’ve ‘lived an interesting but miserable childhood’. How have your experiences shaped your music?
I feel like because I’ve always never stuck to one place longer than 3 years growing up, I’ve always have been experiencing a lot of good and bad moments in my life. Being a third culture kid does get quite lonely sometimes when you’re always on the go and feel like you’re always the outsider. So I do talk about those situations in my music. It’s quite vulnerable to finally open up and talk about it but I know I’m not the only one.

How would you describe your style?
RnB with electronic sounds with a hint of Oriental and Caribbean sauce.

What spurred you on to move from Thailand to London in 2015?
I wanted to have real fish and chips and I finally did haha. But on the serious side, it was time for a new challenge and go back to where I was born. I was a big fan of UK grime and urban scene so it was super exciting to move to London and do music. I couldn’t sleep for three days before flying out!

How did you settle in a new city?
It’s was challenging, I literally almost went homeless after the first month here. I remembered I had less than £100 left in my account so I had to stay on my grind and worked seven days a week for a while to survive. I came out here alone without knowing anyone in London but I always look at the bright side and always tend to find a solution to any troubled times. I’m all about the positive vibes.

Are you enjoying London?
I love London! It’s a melting pot of everything from music to culture to food! I’ve never had so much fun before. 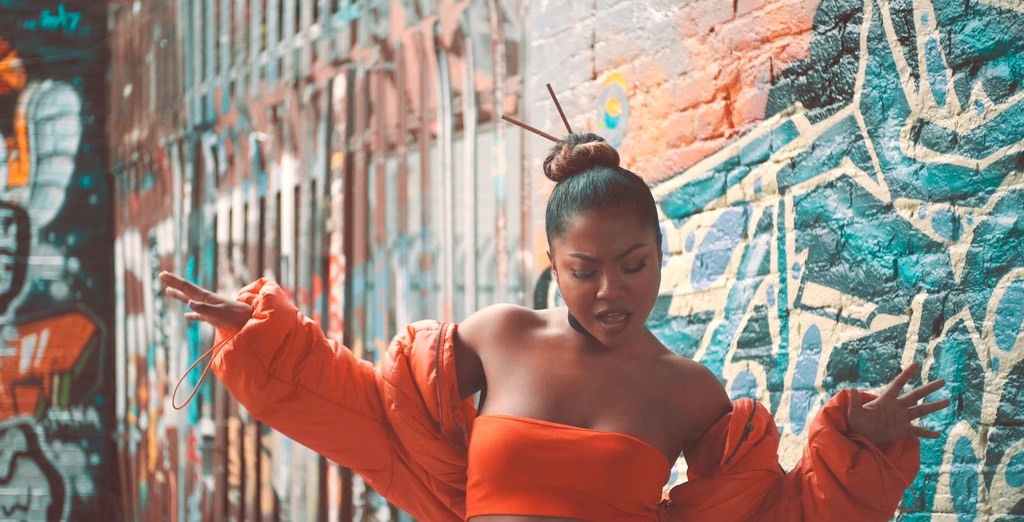 What’s been your best moments of 2017 so far?
Going backstage at wireless festival meeting Chance The Rapper and Post Malone. I was fan boying quietly for a minute, lol. Also to Finally releasing my music properly and more in 2018. I’m coming for ya!

Tell us about your remix of Post Malone’s ‘Rockstar’. How did that come about?
It’s talking about a girl who isn’t afraid to face a challenge and is a go getter. I want to put a message out there that if you’re not afraid of hard work and you’re ready to get your hands dirty, success is coming your way sooner or later. Believe in yourself first things first!

How did you approach the remix?
I like the word rockstar so I thought to myself why don’t I do my own spin you know like a village girl rockstar version lol!

What was the most challenging aspect of the remix?
I’d say that the fact that I’m a singer who’s doing a remix on a hip hop track is already challenging. It sometimes comes out cringey in some cases but overall I think I did a decent job.

When and where can we expect to see you on tour next?
Very very soon! 2018 is going to be an exciting year for me.

If you could collaborate with any living artist, who would it be?
Grace Jones, She’s a badass!

Finally, if you could go back in time and give yourself one piece of advice, when would it be and what would you say?
I’d say from around 16, the first I’d tell myself is to believe in yourself and focus, focus, focus!

Watch the video for Sunaree’s remix of Post Malone’s ‘Rockstar’ on YouTube below. For Sunaree news and tour dates go to sunareeofficial.com.