Steve Young’s debut album Troubadour lands on July 1st following a busy start to 2016. After a successful run of gigs supporting acclaimed blues singer Jo Harman, he played at sold out support gigs for Ramin Karimloo in London at the Union Chapel and Islington Assembly Halls. He followed this up with a sold out show for Time Out London’s Rising Stars of UK Country at 229 The Venue in March, and now he’s gearing up for the release of his first LP on Pledge Music.

If you truly want something or have an ambition then there is literally nothing stopping you from doing it.

2016 - what is your goal?
To release my album, play some festivals, have a huge hit, sign a great advertising deal on one of my songs, learn to speak another language, stop being so sensitive, learn to cook… the usual ;)

Did you make any new year’s resolutions?
Probably, I think it was ‘I am NOT playing a gig on NYE next year’ but I say that every year

What was the biggest lesson you learnt in 2015?
If you truly want something or have an ambition then there is literally nothing stopping you from doing it - you just have to be prepared to do everything yourself and maybe, just maybe, someone will come help along the way.

What was the musical highlight of 2015?
Playing Country 2 Country at the London O2 - life changing really, for the gig and confidence it gave me.

Tell us about the record you have just released…
The entire album has been paid for by fans via Pledge Music. It’s been really hard work but i’ve been so lucky to have some incredible musicians on board. I had to cut 27 songs down to 11 - not an easy thing but i’m confident there are no ‘fillers’. Its almost in the mixing stage and its got an identity and sound that I am already proud of. 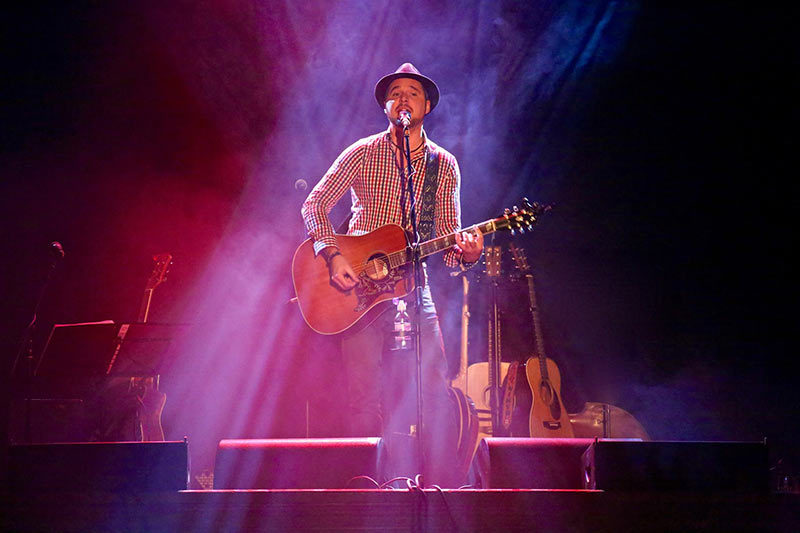 If you had to pick three artists to be filed next to, who would they be and why?
Well, if it was a file, they all be in the Y section, right?

1 - David Gray, a UK songwriter that has inspired me so much over the years.

2 - Eric Clapton, to most - a guitar god, to me a hugely underrated singer, his voice at the end the 90’s was stunning. I love the way he is always so in control and calm in every situation. Even when he was a teenager, look at his eyes, an evil genius ha!

What inspired the record?
Real life, heartbreak relationships, 26 years of wishing I had done this 26 years ago.

If the record were an animal, what animal would it be?
A chameleon - it changes stance quite a bit.

If you could jam with one artist alive or dead, who would it be?
Eric Clapton.

If you could have written one song by another artist, what would it be?
“Wish You Were Here” by Pink Floyd.

Someone is making a film of your life, who will play you?
Tom Cruise - we have the some wonky teeth :)

Lastly, tell us one thing you have never revealed in an interview…
While recording one of the songs from the album both myself and the producer ended up in tears. We did it in one take because we felt too emotionally drained to try again.

For all the latest Steve Young news go to steveyounguk.com.