Artist and Tama Do Sound Healer Shervin Boloorian’s new album One with the Beloved was created out of Shervin’s desire to bridge the growing distance between Eastern and Western culture and address the major societal shifts that are forging this divide. Funded by a Kickstarter campaign, we found out more about his motives behind the album.

I hope One with the Beloved serves as a reminder that there is much to celebrate from all cultures which cannot be overshadowed by negative images on the news.

First up, tell us bit about yourself - what first got you into music?
I discovered the power of the hum for self-soothing as a kid during troubling times. I did the school band thing and formed an all electronic band in LA while trying to get through college. I think we might have made enough cash to cover gas money twice. To get into the business felt like a hostile environment to artists who don’t want to yell, scream, and party on stage and it turned me off from music, so I got into public policy instead, as people do. I left my passion for music behind at that point and rediscovered it way later in life through sound therapy.

You believe in the need to use music to help actively drive change. Why do you feel music has such power?
Music has been a big part of social activism all over the world. Think of Live AID in Africa, anti-Vietnam music subculture in the 60s, the Estonian singing revolution, Bono and the debt-forgiveness movement and so on. There’s a great quote by a composer, Paul Hindemith, about how people who make music together can’t be in conflict. Music that touches impacts on a personal level and has a power to go further to remove barriers and reveal commonalities: that’s what One with the Beloved builds on.

You’re an artist, vocalist and sound therapist. How do these skills blend together in your work?
It’s an interesting question because all three are innately connected to me. Sound therapy is a rapidly growing holistic treatment and my voice tends to resonate most with guests during my sessions; so it’s my main offering. Sound therapy is also part of the healing arts, where the practitioner works with this wonderful world of “energy” to balance, harmonize, etc. Much of what I do in my sessions can be describable as energy art. I treat each individual who comes to me as a unique canvas and a form of living art. It’s a lens that changes your perception of music and sound as sources of energy.

Another point is that there are many musicians who refer to their creative output as “personal therapy”: their art creates cathartic release to help them move through things and get on with their lives. Before sound therapy I probably felt that way, but now the therapy or the treatment is being consciously given as a service to someone else; I have to detach and be removed to hold space for others, so the art becomes an offering and not a personal release. It’s a very different premise for an artist to approach their work in this way.

Your upcoming album, One with the Beloved, seeks to use music inspired by popular Sufi philosopher, Jallaludin Rumi, as a community-building force to connect people and provide a vehicle to transcend political agendas. Can you tell us what’s driven you to write this album?
It’s about reversing negative perceptions from violence and refugee situations in the Middle East and elsewhere—it doesn’t ever seem to end and things are getting more extreme now with Brexit and Trump. Every few years there is a major conflict and crisis in the Middle East. I can’t believe waves of refugees from there are still growing 40 years after my family was stranded in the UK during the Iranian Revolution.

What do we really have to show for all the invasions, sanctions, bombings, regime changes, threats? Our institutions are stuck on this one and in the meantime there is a surge of helplessness and fear in the West and unthinkable loss in the East. It’s a climate for resentment, vengeance, and pain with no end in sight.

I worked in DC as an advisor on US-Iran policy so I know how bad the political gridlock is on the inside. Rather than sink into despair from the the gap between the people and cultures starting with Iran-the UK and US, all countries that I have a deep connection to, I started to look for some source of hope and courage: Rumi was a Muslim and his teachings are by far the most accessible, universal and peace-orientated. His voice can help bring a fresh perspective. He happens to be respected in all corners of the world and I wanted him and the Sufi messages of compassion and forgiveness to be put to healing music because they are urgently needed today.

How did the writing process develop?
Like most of my recordings, they are derived from the workshops and live sound healing sessions I lead. One with the Beloved was definitely a journey and all but two of the songs have never been recorded before by another artist, so it required a couple of years to develop. I wrote the songs wanting them to be as free from stereotype and pidgeonholing as possible. I was also careful to avoid predictable hippie-sounding music while trying to make the composition as universal, heart-opening and richly layered as the poetic messages contained in the words.

I felt strongly that the songs be sung in Persian (the language of Rumi and Iran) and the Sufi songs and prayers to be in Arabic. Both are beautiful languages, which are most estranged in Europe and the US. Six guest musicians of world class caliber joined in and I played at least half a dozen instruments too; including Ney flute, guitar, keyboard and meditation bowls. The toughest aspect was researching the texts and making sure that the pronunciation was accurate. Rumi’s Farsi is 800 years old and difficult to understand, like Shakespearean English.

I understand you worked with producer by Ric Peet. What did they bring the project?
I love Ric! He produced two of the songs on the album and did remixes for the single. He really tuned into the style I was going for very naturally, and responded in a pinpoint way to my feedback and suggestions. He is SO in demand these days but managed to turn Baza into an incredible anthem and lead single for the album. I just recorded with him again when on tour in London and it was awesome to start the project with him at the helm this time.

Which elements of the album are you most proud of?
That it really does feel like a soul-nourishing listen. I love that there are so many different roots feeding the album — the world music instruments, the meditation sounds, the Sufi inspiration, the mystical lyrics by Rumi, the progressive modern flavors, each track takes a listener into a different conversation where the world doesn’t feel so divided. 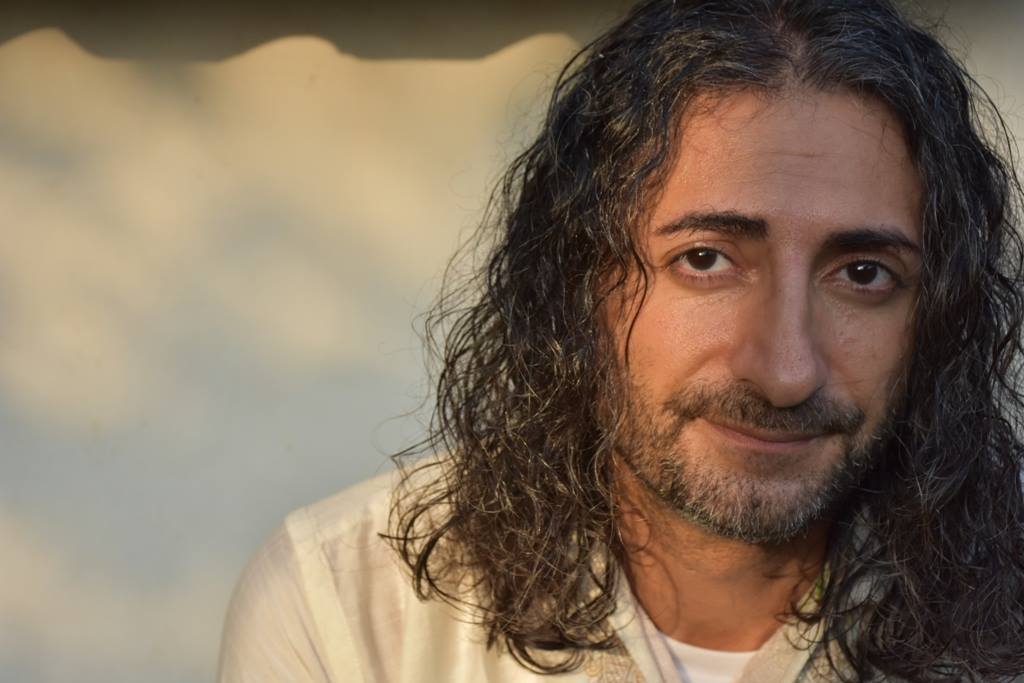 The album offers the world’s first Sufi chant (Zikr) in a African style. Can you tell us a bit more about how this became part of the album?
‘Al Fatiheh/Eshgh Alla Mabud Allah’ was the last track to be recorded and was more like a second thought. It’s evolved into my favorite track on the album. My musician friend Syafril was sharing different vocal prayers in their original form to me and he shared this one called ‘Al Fatiheh’, which he says is among the most important verses in the Muslim faith.

I liked the message but his version was in a minor key (as most Muslim prayers are) and I wanted it to sound more uplifting. I started developing a new melody and merged it with a Sufi movement exercise and chant (Zikr) I developed for a Spirit Night world music event, where I sang ‘Al Fatiheh’ over the top of the chant. When I asked a Senegalese Kora player to join me in the studio, I knew he had to play on this one. It has such a joyful vibe to it and the Kora fits just right with the groove.

What do you hope the reponse will be to the album?
I hope it will touch hearts and make people pause before they become hopeless about the current situation. I hope it serves as a reminder that there is much to celebrate from all cultures which cannot be overshadowed by negative images on the news. I hope it will inspire people to learn more about Iranian music and literature; about Sufism, Rumi and other greats from Iran and the Middle East; to allow people who have never been exposed to these fields let go of any fear of a faith, nationality or ethnicity they don’t understand.

I hope it can serve to support anyone of any hybrid identity (which is really all of us) to not have to rely on stereotypes. Finally, I would love it to galvanize other artists, conscious people and organisations who resonate with the message of the album to become engaged and join this music activism movement and others like it.

The album has been crowdfunded. What challenges did that bring?
It was a balance of being authentic in the message, not being pushy and not being afraid to be bold in asking for support. Fortunately, I had a lot of people who had attended my sessions who believed in my work and were inspired. It was a risk because if the amount we sought wasn’t raised, then we lost it all. It turned out we raised 25 percent more than we anticipated. It was a huge validation that the idea was worthy of sharing with the world.

How have you connected with those who have funded the project?
I’ve been most impressed with the consortium of official groups and organisations in Bali who backed the project. It was unprecedented for a cause that had no direct tie to Indonesia. I was most touched by the endorsement by celebrated Rumi scholar and translator, Coleman Barks, who loved the project and responded immediately to my email to him. I contacted him out of the blue and remember agonising over it.

Finally, if you could go back in time and give yourself one piece of advice, when would it be and what would you say?
I would have looked after my health better and stuck with learning Persian so I could have read more Rumi.

Listen to One with the Beloved on Bandcamp below. For news and tour dates visit Shervin Boloorian’s Facebook page.