Rumour Cubes are Joe Bartlett (bass), Jay Malhotra (guitar, synth/keyboard), Hannah Morgan (violin), Terry Murphy (viola), Omar Rahwangi (drums) and Adam Stark (guitar, piano, electronics) - a collective making what has been described as ‘post-post-rock’. Their most recent single, ‘A Flicker of Empty Flags’, is the second single of a two-part release challenging the politics of fear and intolerance, the follow up to ‘¡No Pasarán!’. We spoke to the band to find out more about their music, their most recent releases and what’s coming next.

‘A Flicker of Empty Flags’ highlights the emptiness of the patriotism behind Brexit/Trump and the use of that emptiness to promote far right objectives.

First up, tell us bit about yourselves - what led you all to forming Rumour Cubes?
Adam: Our drummer Omar and I were playing in another band called Mendoza that came to a close in 2009. Over the course of a long hot summer of discussions we decided we wanted to start an instrumental band with more varied instrumentation than the guitars/drums/bass setup we’d been working with before.

In the autumn, we started meeting with other musicians and before long we met Hannah (violinist) and Joe (bassist). Terry (viola) and Jay (guitar) joined later in the story after some line up changes but each member has brought their own unique aspect to the band and it really is a great collaborative effort from the six of us.

Omar: To add to Adam’s point, it wasn’t just about having a different instrumentation it was about exploring how we could make the most of the chemistry between each musician and create the most energy and emotion we were capable of in our music while taking inspiration from bands that we were into.

Who did your take inspiration from?
Adam: I’m sure we’ve all got a different answer to this. For me there was a lot of great instrumental music from Godspeed and Mogwai, Aphex Twin and Boards of Canada through to Nils Frahm and Olafur Arnalds. But Omar and I also really bonded over Smashing Pumpkins records and I feel we borrowed a lot of the live energy and dynamics from them.

Hannah: Melodically I think I take a lot of inspiration from English and Irish folk tunes, and I think Terry and I often channel Romanticism in our big sweeping melody lines. I was always a classical musician until I joined Rumour Cubes so I think I’ve taken more inspiration from classical composers than from contemporary artists.

Jay: I think both Adam and Hannah’s answers there describe were we sit in Rumour Cubes trying to strike balance between traditional instruments and melodies and a lot of new digital technology, we definitely take influence from both camps (Adam even designs audio processing software!)

Joe: Rhythmically me and Omar used to have loads of influences but now just try to turn everything into Toto.

Why the name ‘Rumour Cubes’?
Adam: We went in circles over the name for months. Rumour Cubes was literally the only thing we could all agree on! I like that there are six of us, one for each side of a cube. But really that had nothing to do with it. Choosing band names is hard!

Hannah: I think it took us longer to choose a name than it did to write our first EP! I really do like it though. We printed some flyers for The Narrow State which you could cut out and fold into a cube which was fun.

Jay: It was a done deal by the time I joined, but I’m pretty sure they just chose it so people could get it wrong and assume we’re called “Rubix Cubes”.

How would you describe your musical style?
Jay: A recent review described us as post-post-rock, I’m not entirely sure what that means but sure. I normally just tell people I play in “an instrumental band but with strings and stuff” and leave at that (I’ve already lost their interest by that point) .

You released your first new music since 2014 album Appearances of Collections this year. Why the wait?
Adam: So many reasons! Firstly, making Appearances of Collections was a hugely energy intensive process. It involved 16 different musicians and was the longest thing we’ve ever done. We are all so proud of it, but when it was done we had very little left in the tank. We ran out of steam.

Then a whole host of other things happened - we got involved in with a music industry relationship that went really wrong for us and totally killed our vibe. Also life happened (one of us had kids, another got married) and we all went and wrote some different music for a while (see Eat the Evidence, Munro Fox, Austel, Cosmic Strip, Sean McGowan, Get Cape. Wear Cape. Fly). Anyway, we’re back at it now with new experiences to draw on and it feels great! 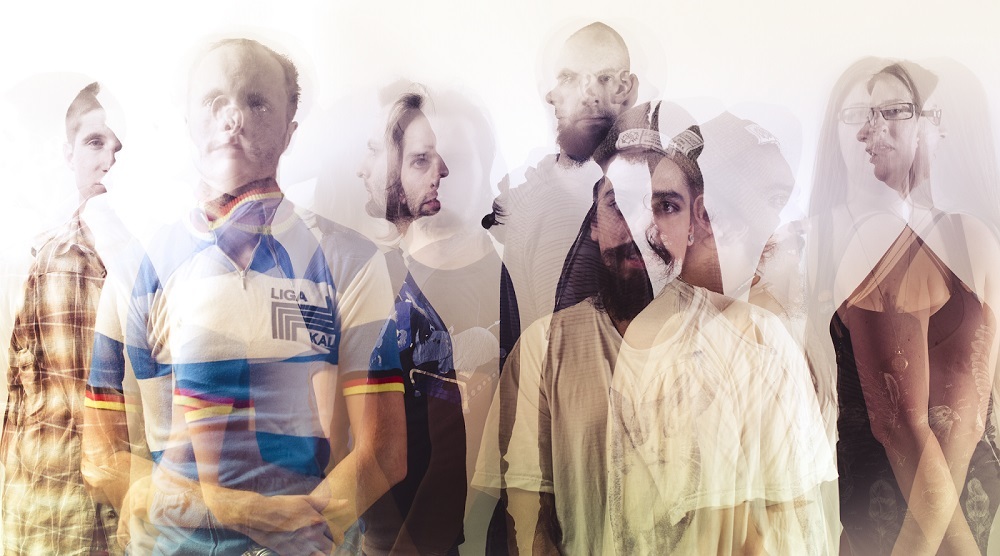 Tell us about your latest single ‘A Flicker of Empty Flags’, the follow up to ‘¡No Pasarán!’. What are they about?
Adam: Both tracks are a response to the rise of nationalistic projects (Brexit, Trump, the Law and Justice party in Poland and many others) that have allowed the far right to become normalised, masquerading as “patriotism”. ‘¡No Pasarán!’ translates roughly as “they shall not pass” and has been used for many years as a slogan against fascists. ‘A Flicker of Empty Flags’ highlights the emptiness of the patriotism behind Brexit/Trump and the use of that emptiness to promote far right objectives.

When did you write ‘A Flicker of Empty Flags’ and where did you record it?
Hannah: We actually wrote both of these tracks back in 2016 - Jay co-runs a studio in Southend (SS2) so we spent a couple of weekends there and did a whole bunch of writing. Two of those ideas turned into these recent singles and hopefully a few more will make an appearance over the next year. We recorded the tracks in Jay’s studio in Southend, with some additional recording done by Adam at CAVE in Peckham. We’re incredibly fortunate to have two band members with recording spaces and experience.

Jay: It’s definitely helpful having access to studios, they way our lives have been this past year we weren’t able to get all six of us together at any point during the recording or mixing of these tracks so being able to go in as and when people were available was a godsend in actually getting these songs finished.

How does ‘A Flicker of Empty Flags’ represent your style?
Hannah: I think we all consciously wanted to make something which sounded different to Appearances of Collections, which is at its heart I think quite a melodic and pretty album. Obviously we didn’t want to change our sound entirely but the world feels a lot less melodic and pretty than it did in 2012 (when we started writing Appearances). So I think there was a deliberate attempt to go back to the darker, more oppressive sound of some of our earlier tracks (University, Gove Curve).

But at the same time we’ve all grown a lot musically since then - in 2013 we played a number of shows with Sam Duckworth which exposed us to a host of exceptionally talented musicians playing a whole bunch of different styles of music, and I think that experience has really transformed us as a band. Personally, I think ‘A Flicker Of Empty Flags’ is one of my favourite things we’ve ever written.

Jay: There were a few things that I remember coming up during the writing and recording that pushed these songs to be different. In the past we’ve defaulted to the strings being the ‘lead’ instrument, taking the role vocals would normally take in a band. This time we spoke about the idea of strings being more rhythmic and the power and intensity that that can bring. On top of that Hannah and Terry had started to get into effects pedals so there’s a lot of that going on too. Writing the songs were we did we had access to a piano and lots of synths and myself and Adam both naturally went to them for song writing rather than guitars.

Joe: The title came from a poem Steve Willey did with us on the song 1871 which was written about something else but fit perfectly with what we perceived the subject matter of this song to be. (Can someone say this better, or delete it if it isn’t needed?)

What response did ‘A Flicker of Empty Flags’ get?
Joe: Music Related Junk said it was one of the five best songs released in the week of 18/11/2018.

What are your plans for 2019?
Adam: We’re back writing again, which is great. I feel an album coming on…

Hannah: Hopefully more gigging as well! We played our first shows in more than 2 years earlier this year and it felt fantastic. We’ve got another gig booked on 24th January at The Finsbury.

Jay: All of the above, I’d love to try and get out of London for a few shows, maybe visit some places we’ve not been before.

Omar: To keep progressing musically as a band. I hope we take every opportunity to explore what excites us musically and hope that in turn others will find something in our music for themselves too.

Finally, if you could go back in time and give yourself one piece of advice, when would it be and what would you say?
Adam: Be bold. We’ve always been at our best when we’ve gone above and beyond what seemed “normal” or “enough”. I wish we could have done that at every juncture, but it is very hard to do!

Hannah: I’m not sure if this is aimed at the band or me personally?! On a personal level, I’d probably have gone back and told my 15-year-old self “You don’t want to be a lawyer, you don’t want to live the sort of life everyone expects you to, and that’s totally ok. You do you.”. For the band, I’m not really sure to be honest. I guess I wish we’d done more touring when we were all younger and less busy!

Listen to ‘A Flicker of Empty Flags’ on SoundCloud below. For news and tour dates go to rumourcubes.com.