Power, Resilience & Joy is the fourth album from American hip-hop artist River Nelson, following his critically-acclaimed LPs The Rise and Fall of River Nelson, The Shape of the Sky and How To Dream. We caught up with River to find out more about his latest.

In life, Power, Resilience & Joy represents how I try to overcome whatever challenges lie in front of me.

First up, tell us bit about yourself - what first got you into music?
I got my first major break when I was signed to Arista Records several years ago. I lost that deal and then immersed myself in the New York City underground hip-hop scene. Then in 2010, I released an album called the ‘Rise & Fall of River Nelson,’ produced by the legendary British producer Lewis Parker and it took off. That album gave me a loyal following in various countries and I’ve released three albums and an EP since then.

I first got into music by developing an obsessive like interest in different artists, whether it was studying their albums or reading about their lives in biographies. From there, I wanted to try my hand at writing a song myself and fell in love with the process once I did.

Were there any particular bands or artists you took inspiration from?
Oh yeah, definitely. First starting out, A Tribe Called Quest, Outkast, Bob Marley, The Doors, De La Soul, Radiohead, Coldplay and Sade are just some of the people I drew from. Basically, I love anything with thought-provoking lyrics, no matter the genre. I also like folk music, because a lot of it is lyric driven with cool storytelling.

How would you describe your musical style?
I would say a common theme in my music surrounds examining life’s hardships while trying to figure out how to overcome them in a strong and powerful way. I also write a lot about hope, resilience and being consistent when chasing your dreams.

In regards to the sound, I would say my style falls under the lyrically driven hip-hop category with pop style hooks that are full of melody. I also work with producers both in the U.S. and the UK, which I feel gives my albums a unique sound with some variety.

If you could collaborate with any living artist, who would it be?
Sade. Not only for her amazing voice, but because of her songwriting ability. I don’t think she gets enough credit for her actual lyrics.

Tell us about your new album, Power, Resilience & Joy. What’s it about, what are its themes?
The album is about getting through life’s challenges, which speaks to the ‘resilience’ part. But getting through those challenges powerfully, while maintaining a joy — which is different from day-to-day happiness because it’s perpetual.

Some of the themes of the songs are about being knocked down and getting back up. Others are about staying focused on your dream or goal when life gets in the way. There are also songs about relationships, love, dissension and I also discuss some of the beautiful things in the world, as well as some of the ugliness.

When did you write it and where did you record it?
I wrote most of the album throughout 2018, and the beginning of 2019 in different parts of Los Angeles, California. I recorded in downtown L.A., Santa Monica, Universal City and North Hollywood. But the first single ’Today’ I wrote and recorded in Washington D.C.

On the music end, the ‘power’ aspect relates to focusing on writing and recording this album without being distracted and staying in the right mindframe. The ‘resilience’ side relates to fighting through those distractions, and the ‘joy’ has to do with the feeling I had during the creative process. 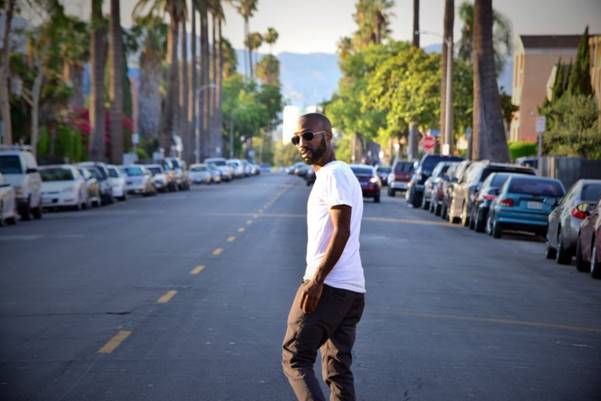 Can you talk us through each track?
Sure. ‘Power, Resilience & Joy’ sets the tone for the album and gives a quick explanation of the title and concept.

‘Broken Sky’ is a song about the current state of the U.S. with the racial division perpetuated by Donald Trump, the mass shootings, the violence in certain neighborhoods and other problems that exist in the country. I feel that things are broken at the moment, so it’s an acknowledgement of that. But the song is also a like a wail from me because things are so messed up.

‘The Night the City Died’ is a tale about what can happen to a city when its problems aren’t dealt with or rectified. It’s also about one’s attachment to city life and whether he or she is willing to give it up to live better.

‘Hindsight’ list some of the things I’ve learned throughout the years in retrospect and as I got older. It’s one of the more personal songs I’ve ever written and one of my favorites on the album.

‘Today’ is about someone who’s been working and striving for a particular goal and want something good to happen to him today. It’s the first single off the album, and it was produced by British producer Giacomo Trivelli of the group Sam Sure and Giacomo. We’ll be releasing the video to that cut very soon.

‘Longer Than Always,’ produced by K Murdock of the group Panacea, is about a man’s hope that his woman will stick by his side as life gets tough.

‘Law of Averages’ is based on the idea that all bad things sbased on the normal ups and downs of life. It’s also a song that tells the listener to stay consistent in whatever goal they’re trying to attain, because the law of averages say things will eventually shift in a positive direction if they hang in there long enough.

‘Tammy & Marcus’ is about a teenage couple who are deeply in love and both come from abusive households. Eventually, they make an elaborate plan to runaway from home and the song has a surprise ending that most won’t see coming.

‘Japanese Proverb’ is a song about getting up more than you’ve been knocked down and as long as that happens, you’ll be victorious. It was produced by one of my favorite producers, the talented Orlando Lorde, and I believe it’s a cut that’ll inspire people to take on whatever challenges they face.

‘PRJ’ sums up the concept of the album and pulls it altogether.

What are your hopes for Power, Resilience & Joy?
I’d like to get it to as many listeners as possible. I’d like it to continue the conversation I’ve been having with my fans for the past several years and gain a lot more fans. I also hope it catches on in more countries around the world, and I’m able to play in those countries and meet the people there.

I’d also like it to satisfy ardent hip-hop fans but also pull in general music lovers who don’t necessarily follow the rap scene. And lastly, I’d like for it to inspire people to keep moving towards their goal, despite whatever obstacles are in their way.

What can you tell us about your plans for the rest of 2019?
We’ll be shooting more videos for the Power, Resilience & Joy album and going on tour as well. We plan to play all throughout the U.S., the U.K. and other countries. We’re actually getting that together now.

I’m also getting the first ideas for the next album and will start the beginning phases of writing and recording that project soon.

Finally, if you could go back in time and give yourself one piece of advice, when would it be and what would you say?
It would have to be when I first started my career. I used to define success in specific ways, and that was to sell a certain amount of records, gain a certain amount of notoriety and be the next big rap star.

Now, I’d tell my younger self that success comes in various forms and to celebrate any victories that are achieved whether big or small. I also would’ve told myself to stick with my instincts when creating an album and not to second guess myself.