Richard Dilks is a singer/songwriter from Chesterfield, UK, who creates music with his guitar, harmonica and a homemade suitcase bass drum. His latest album is Song In English which was performed live in as few takes as possible. We caught up with him to find out more.

I sort of wanted to mix the personal with political and wider world themes. Sometimes in the same song. I guess hoping it would make the record stand up for a longer period and not just be of the moment.

First up, tell us about yourself - what got you into music?
Growing up my uncle was the first person I knew who really listened to a lot of music. He’d show me all the greats like Elvis, Johnny Cash, Bob Dylan, Dolly Parton that sort of thing. I’d always let him know anything I’d been listening to and get his opinion, I still do.

As far as playing music goes it was simply a case of my friends forming a band, I couldn’t play an instrument so I offered to be the singer and I’d always assumed the singer was supposed to write the lyrics.

And it all just kinda grew from there. I’m sort of happy I never got round to recording anything properly when I was younger because I’m really enjoying what I’m doing right now and don’t think I’d have ended up here if things would have worked out differently back then.

Were there any particular bands or artists you took inspiration from?
There’s been so many over the years, Smashing Pumpkins, Neil Young, The White Stripes, Bright Eyes, obviously Bob Dylan was in there at one point.

At the moment I’d say it’s Abner Jay. He was a one man band that travelled around Amercia playing these amazing songs and telling the most hillarious stories in between. He’d play a six string banjo, harmonica and drums and he had the most soulful voice! 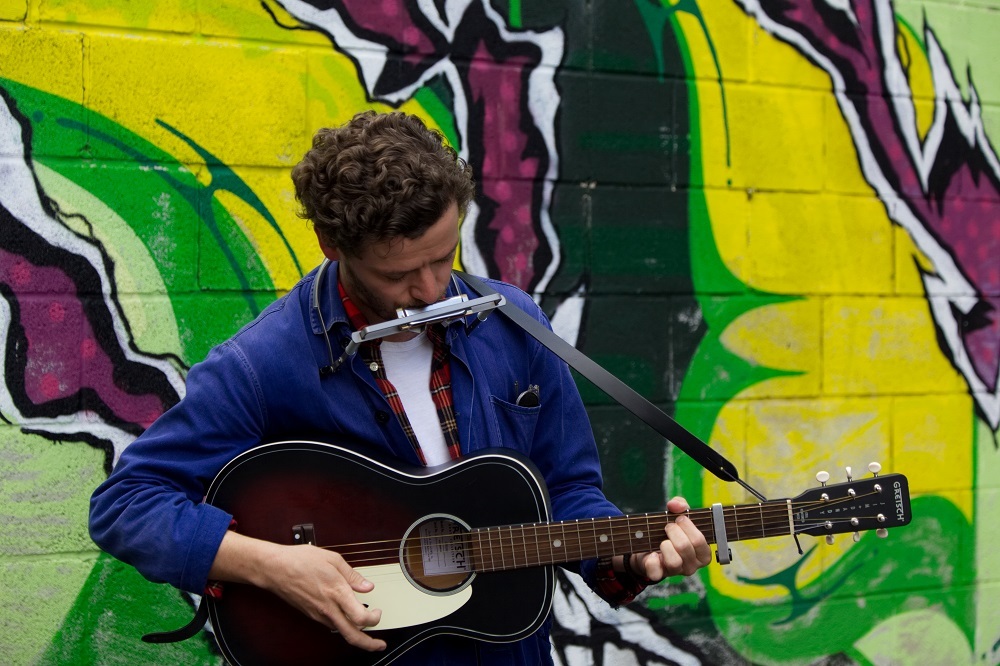 How would you describe your musical style?
With how I play and perform now it came out of a need to challenge myself, make myself work for the sound I wanted. I like to do everything myself. So I’ve ended up as sort of a one man band.

It’s all just pinched and borrowed from bands and artists I’ve come across over the years, repackaged and hopefully coming out with some form of originality.

I wanted drums at gigs to make sure I’d be heard above the bar noises so I got a bass drum, but that was a nightmare to cart around on trains on my own. I saw a video of a guy called Shakey Graves using a suitcase as a kick drum so I borrowed that idea. I’m not a very good guitarist but I wanted the songs to be a little more intricate, so I borrowed Bob Dylan and Neil Young’s harmonica.

I liked the idea of songs just needing the basic ingredients and if you put the effort in, it’d work, so I borrowed The White Stripes minimalist approach. And I’ve always loved the sounds of old blues artists voices, Lead Belly, Son House etc. so I’ve hopefully tried to get as close to that as an Englishman can do.

But in the end it all boils down to wanting to be Abner Jay.

If you could collaborate with any living artist, who would it be?
Emmylou Harris. I’ve got a real soft spot for duets and just to have her outshine me in every way on a song would be amazing! 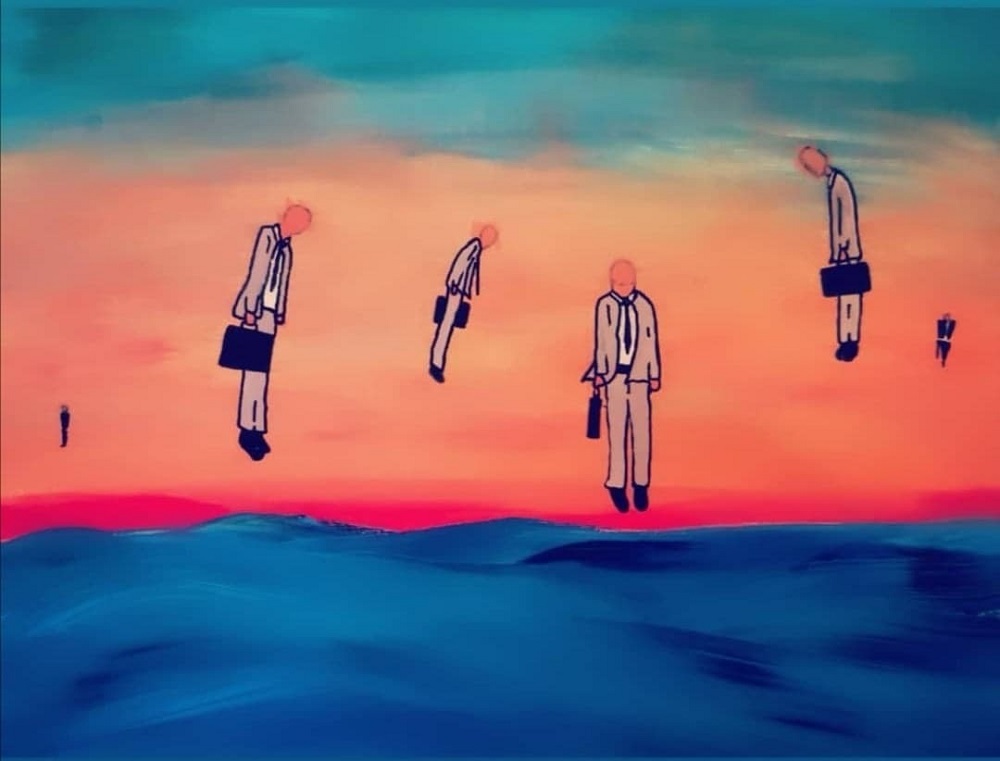 Tell us about your latest release ‘Songs In English’. What’s it about?
There’s no single overriding theme. I sort of wanted to mix the personal with political and wider world themes. Sometimes in the same song. I guess hoping it would make the record stand up for a longer period and not just be of the moment.

In line with the borrowing of everything, the title comes from a comment Leonard Cohen made about how a lot of his album titles are very matter of fact.

When did you write it and where did you record it?
The oldest song on there is about seven-years-old, the newest was about a week old at the time of recording. It’s all been written in various notebooks in any place I was in at the time.

I have a rule that I can’t take more than 20 minutes to write the bulk of the lyrics to a song. I’ll occasionally go back and edit, or add a few lines here and there but the bulk has to be in that initial spark of inspiration.

Everything was recorded by Matthew Doxey at Tesla Studios in Sheffield. He did such an amazing job with everything. I wanted to record everything live in as few takes as possible and I’m sure he knew a hundred ways to make the process easier and sound better but he let me do my thing and gave me brilliant advice along the way and really worked with me to get the best out of all the songs.

I’ve been to studios before where you can tell it’s just a case of the producer waiting to clock off for the day but Matt wasn’t like that. I’d record what I though was the master take of a song and he’d always say ‘I think you’ve got one more in you’.

How does ‘Songs In English’ represent you?
In its most basic form it’s exactly what you’d get if you came to see me play live, minus a few self deprecating comments between songs. But overall I hope you can get an opinion of the sort of person I am through the songs, for better or worse. It’s songs cherrypicked from the last few years of my life. 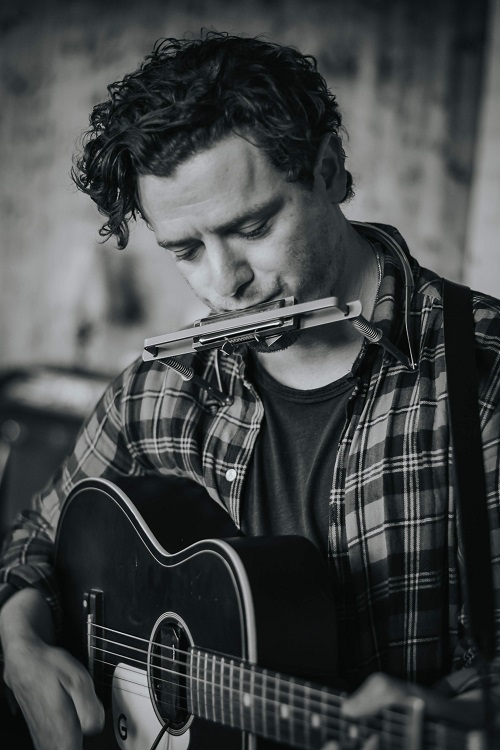 Can you talk us through each song?
I’ll try and keep this brief:

‘Milk Straight From The Bottle’ - I wrote this whilst driving to work one day and had to pull up at the side of the road to write it all down. It’s about not wanting to wait around and always keep moving.

‘Everyday Entrepreneurs’ - I originally wrote this without really wanting it to turn into a song. I was just enjoying playing around with words. I kept running through the first verse in my head for a week or so then it ended up all coming out in a beer garden one night and was quickly typed into my phone before the people I was with releaised I wasn’t paying attention.

‘Sertraline Dreams #4’ - This is the oldest song on the album. It’s gone through various guises and names over the years. It wasn’t going to be on here but when had some free time at the end of a recording session so I quickly ran through it having changed the tempo. It’s my friend Jim’s favourite song of mine so I included it for him really. Nobodies Favourite Idiot - I always get told off by my partner for being too self deprecating when I chat between songs at gigs. So I got it down in song form instead.

‘Take This Hammer’ - An old prison/railroad song and one of my favourite folk songs.

‘Tabloid Blues’ - About how most peoples opinions are solely based on other peoples opinions, be it friends or the media and how easy it is for people to ignore that if it suits you in some way.

‘People Always Want More’ - We’re back to self depracation. My friend Ellis Cox sings this song with me and I think her voice just sounds amazing on it.

‘Makeshift Ashtray’ - This is the newest song on the album. It’s about how worries and anxieties and health issues can very quickly be forgotten or ignored if it suits you.

‘I Moan’ - I try to avoid writing love songs and broken hearted. They’ve been done to death. This is probably the closest thing I have to that.

‘We’re All Just Pissing In The Wind’ - When I started writing this it was going to be a grand sweeping statement about the way the world is etc etc but I got halfway through it and realised we’re all in the same boat at the end and it’s already sprung too many holes.

What are your hopes for ‘Songs In English’?
I suppose I just hope that in 10 years I’ll listen to it again and still be as proud that I made it.

What else have you got coming up in 2020?
Like everyone it’s all a bit up in the air at the moment. But in the down time we’ve all had I’ve written the next album and recorded an EP of folk songs on an old Texet Cassette Player.

I recorded it all in one take then popped it in an envelope and posted it off Matthew Doxey to mix without listening back to it. It’ll be called ‘Folkways Here I Come’ and should be ready in a few weeks.

Finally, if you could go back in time and give yourself one piece of advice, when would it be and what would you say?
I’d probably go back to when I was about 25 and tell myself not to be so bloody lazy. I’m working really hard at the moment to finally do the music I’ve always wanted to do and I didn’t have half as many other obligations then, plus I’m getting old!

Listen to Songs in English on Spotify below. For the latest, find Richard Dilks on Facebook.