North Atlas produce a sound associated with traditional stadium-ready rock bands combined with elements of shimmering, modern electronica. Their latest single is the energetic ‘Volcanoes’. We spoke to them about the new release and careers so far.

I wanted it to be a song you could put headphones in and just stomp down the street to.

First up, tell us bit about yourselves - what first got you into music?
We’re all from very out of the way places in Scotland. Music and playing in bands was something we all did to tear us away from the usual teenage pastime of drinking in the forest (although that was unavoidably done from time to time haha).

Not having much to do opened up a world of hanging out in record shops and listening to the brilliant records over and over, from Franz Ferdinand and Biffy Clyro to Guns n Roses and the The Prodigy.

At times it was amazing, and playing in a band ourselves was a way of sharing that amazement we had about music with others, even though we probably sounded terrible!

How and when did you form the band? What was it that brought you together?
After I’d written some rock/electronic type music for a project my brother and I had stared a few years prior, the two of us went into the studio with producer Mark Freegard who had previously worked with Marilyn Manson and Trent Reznor on Manson’s first record, which drew us to his talents which we admire! For a few years we worked together recording over 30 tracks, honing the sound (the definite downside of being perfectionists)

Finally, we put out posters asking for people interested in the project, where we found two very talented musicians, Kai Cairney on the bass and Drew Leslie on guitar. And in 2016 the band came together.

Were there any particular bands or artists you took inspiration from to form your musical and thematic style?
I think a big influence has been the American Beauty/American Psycho & Save Rock n Roll records by Fall Out Boy, I guess it’s there lesser known new stuff but seriously it’ll blow you away! Awolnation for sure. And of course the three wise men of Scotland, Biffy Clyro.

How would you describe your style?
Contemporary Alt Rock I guess, but it’s a hard one, it’s not too like anything else, which I’m not convinced is a good thing haha. 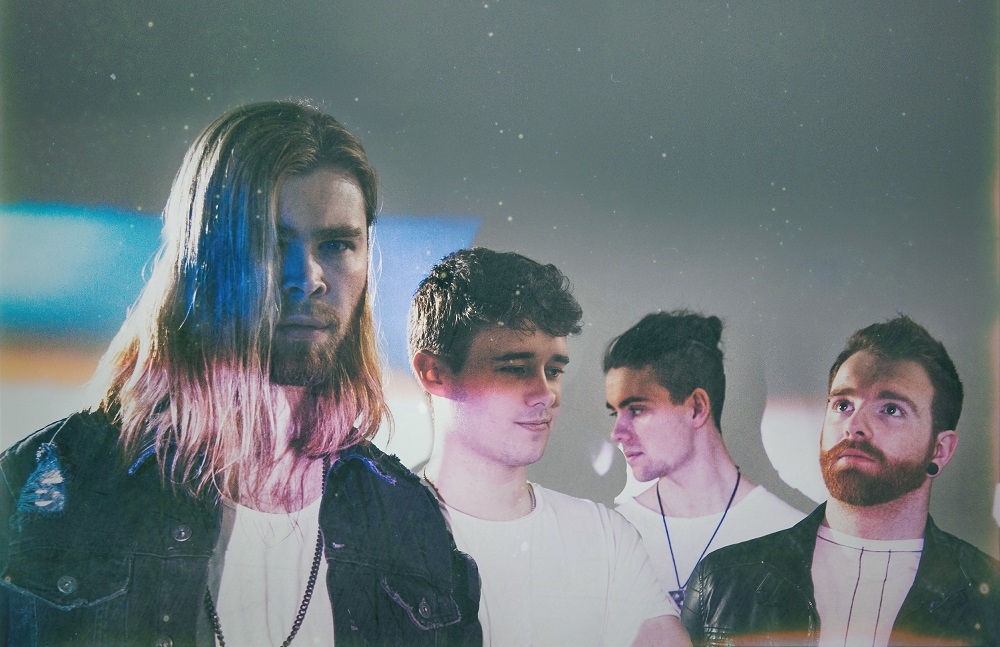 What’s been your highlight of 2017?
I think seeing the reaction we’ve had to the singles we put out this year, it’s been a great response! We’re very thankful. But aside from that more importantly I think we can all agree, discovering a culinary sensation, the best burritos ever tasted on tour in Newcastle. At a wee place called Zapatista I think. Oh my.

Tell us about your single, ‘Volcanoes’. What’s it about?
The song started as a drum loop inspired by The Big Pinks ‘Dominoes’. Those melancholy lyrics for the verse came quite quickly because I wanted to make a sharp contrast between them and a big sounding chorus, which is altogether more positive.

I wanted it to be a song you could put headphones in and just stomp down the street to.

When did you write the single and where did you record it?
It was written last year in a wee flat in Glasgow and recorded not too long after at Chapel Studios in Lincolnshire.

How does it compare to your previous releases?
I think we got the sound in a place where we wanted it. We had only one previous release beforehand and having been out in the road for a bit before heading down to Chapel I think we’d learned a bit about our direction.

You worked with producer and Sikth guitarist Dan Weller (Enter Shikari). What did they bring to the record and what did you learn from them?
Having done a few Enter Shikari records Dan knew what we were going for with the electronic and soundtrack type elements to our sound, not to mention him being a brilliant guy, one of the greatest qualities in a producer.

There’s always a lot to learn, every time you make new music, a better understanding of your music/instruments, your band mates. But most importantly surrounding yourself with people who push you! In as many ways as possible so you improve. Screw comfort zones.

What are your hopes for ‘Volcanoes’?
I hope people will enjoy it, and if you think the song sucks maybe you’ll like the video, haha.

When and where can we expect to see you on tour next?
There’s nothing planned tour wise at this time, think it’s going to be more writing for now.

If you could collaborate with any living artist, who would it be?
Micheal Jackson.

Finally, if you could go back in time and give yourselves one piece of advice, when would it be and what would you say?
1999 to tell my young self not to get too excited about seeing the new Star Wars movie, haha. Nah, but band-wise, I think if everyone starting out knew you’ve got to fail over and over before you start getting anything right there would be a lot less confusion and maybe a little less ego!

Listen to ‘Volcanoes on SoundCloud below. For news and tour dates go to northatlas.co.uk.