Since forming in 2013, eccentric quartet Nausica have worked from their home countries of both Germany and the Netherlands, writing and producing their own material. We caught up with the band following the release of new single ‘Black & White’.

“The future of mainstream!”

First up, tell us bit about yourselves - what led you all to forming Nausica?
We’ve all been active in different bands (and still) are, but Nausica is our ‘baby’. The place were we can do everything musically we’ve always wanted to do. We’ve become such a good team over the years that working together, in the studio, or on stage is a real joy.

Who did your take inspiration from?
We listen to a lot of different stuff but some all time favourites are Future Islands, Warpaint, Foals, Blood Orange, PJ Harvey, Talking Heads and Michael Jackson.

Why the name ‘Nausica’?
Nausica is actually in homage to a Ghibli anime film from the ’80s, called Nausicaa, The Valley Of The Wind. A timeless story which plays in the future, where a young girl who can talk to insects, discovers, that the toxic jungle which spread over almost the whole earth and destroyed almost every human population is cleaning the world of the industrialization of mankind. I was stunned and fell in love with the timelessness of this story, and the name felt right. Back than it was only me and our guitarist, and he luckily agreed!

How would you describe your musical style?
The future of mainstream!

What do fans get at your live shows?
Energy, love, good vibes and hit songs. 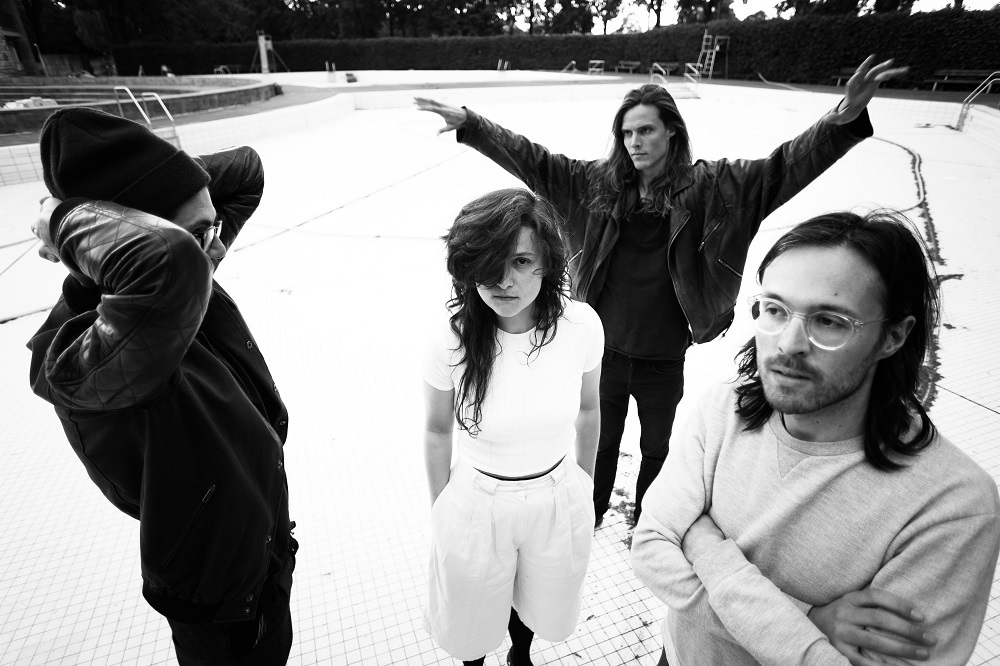 You write your music from your home countries of both Germany and the Netherlands. How does that impact your music?
In the beginning we didn’t think about that at all, when we decided to not live in the same city anymore. It was always clear everything will go on the same way with the same ambitions as before. It was just later for us that we recognized that this is also a part of our more what we call “a European sound”, than just bound to one country. And we love that!

When we meet, we work very purposeful. Actually it makes things more clear. You’re not always available, but when you do, you have to be sharp. It’s constructive! Of course it helped that we lived in one place when we started, to really dig into the search of your own style. Now we’re like in a flow. It’s really fantastic!

Your latest single is ‘Black & White’. What’s it about?
The title ‘Black & White’ is based on the lyrics “It’s black and white, boy, the air we breathe” and describes symbolically two different mindsets in form of an ongoing flashback. Conscious choices made with clear memories in contradiction to the typical gray area, where everything you feel and do seems blurry. The chorus could be described as the deep powerful and colourful output of emotions with almost losing the feeling for reality.

When did you write it and where did you record it?
We did the recordings in Berlin, mostly in our drummers studio. He shares a studio with other people and got passionate about engineering. It’s an addiction! Our singer is also recording at her place at home. The drummer and singer meet a lot, than sometimes we meet for intense recording sessions all together, or we email around new ideas and sounds.

How does ‘Black & White’ build on your style?
I guess when you compare ‘Black & White’ to our two previous singles, it’s a bit less pure ‘pop’ and a bit more ‘experiment’. And that’s a side of that’s pretty important. Our music has been described by some people as being ‘on the edge’ of pop and experiment.

What are your hopes for ‘Black & White’?
I hope people who hear the song or see the video will get curious about our live show enough to come out and see us!

Do you have more music to be released this year?
Yes, at least one single. But there could be more as well, we’ll keep you updated!

Where can we see you live in 2018?
We’re playing two more shows in Holland, for now. But there’s more to come…

Finally, if you could wish for one thing to happen to the band this year, what would it be?
To finalise more recordings, but with a good and fitting partner label.

Listen to ‘Black & White’ on SoundCloud below. For news and tour dates go to nausica.nl.