Bristol-based experimental three-piece My Octopus Mind release their debut album Maladyne Cave on Wednesday, July 10th. The mind-altering album was recorded over two years and embodies creative obsession with guitarist/vocalist and producer Liam O’Connell living in his studio for a year to be able to afford to self-fund the record. We caught up with the band to find out more.

First up, tell us bit about yourselves - what led you teaming up as My Octopus Mind?
Izy and Liam independently migrated to Bristol, and through synchronicity found themselves without jobs wrestling with Liam’s songs for six hours a day, day-after-day in our old drummers tiny, sweaty bedroom. We bonded over weird time signatures, Jeff Buckley, The Mars Volta, and Killimanjaro Darkjazz Ensemble.

That was maybe, three to four years ago, and our youngest member Oli has been with us on the kit for a year now. We knew his friends, we liked his work with Lambhorn, so we watched him from across the street and left sexually explicit notes in the window of his car. He left the naughtiest replies, and we’ve been the best of friends since.

Who do you take inspiration from?
Bit of Buckley, bit of Mars Volta, Radiohead and Killimanjaro Darkjazz Ensemble, bit of all the people who have given us love and fucked us up. What else…? Spending time alone. Letting the subconscious do the talking. The Queen. We love the Queen.

We spend many writing sessions in dark rooms with sunglasses looking at pictures of the queen. It’s more faith in the presence of her image than her actual image that does it for us.

Why the name ‘My Octopus Mind’?
Maybe because octopodes have limbs that can act completely independently from each other, and that approach has some parallel to our music. Maybe it’s because they possess an otherworldly consciousness, an outside way of thinking that our ethos resonates with.

It’s definitely not because we were chosen by an old god known as The Great Cephalopod Consciousness to spread its message of world domination. No, certainly not that. And if you think that, you should know we have powerful friends who know where you live.

How would you describe your musical style?
Experimental love noise post face neo jazz fish. I don’t know. We make the stuff we want to hear. We feel deep shame in just calling it rock, but it’s probably what it is. There are definite flavours of all sorts, a little arabic and balkan, a little ambient jazz, a little psychedelic, a little post-romantic chamber music… but it’s rock.

If you could collaborate with any living artist or band, who would you choose?
Either The Kilimanjaro Dark Jazz Ensemble, King Gizzard and the Lizard Wizard, or a Howler Monkey in the throes of ecstasy, depending on who’s willing to do the most work and demand the least royalties. We’d love to work with Omar Rodriguez Lopez but we’d probably clash and it’d end with us being credited as guest musicians on his solo album. Overdubbed by uncredited session musicians, of course. 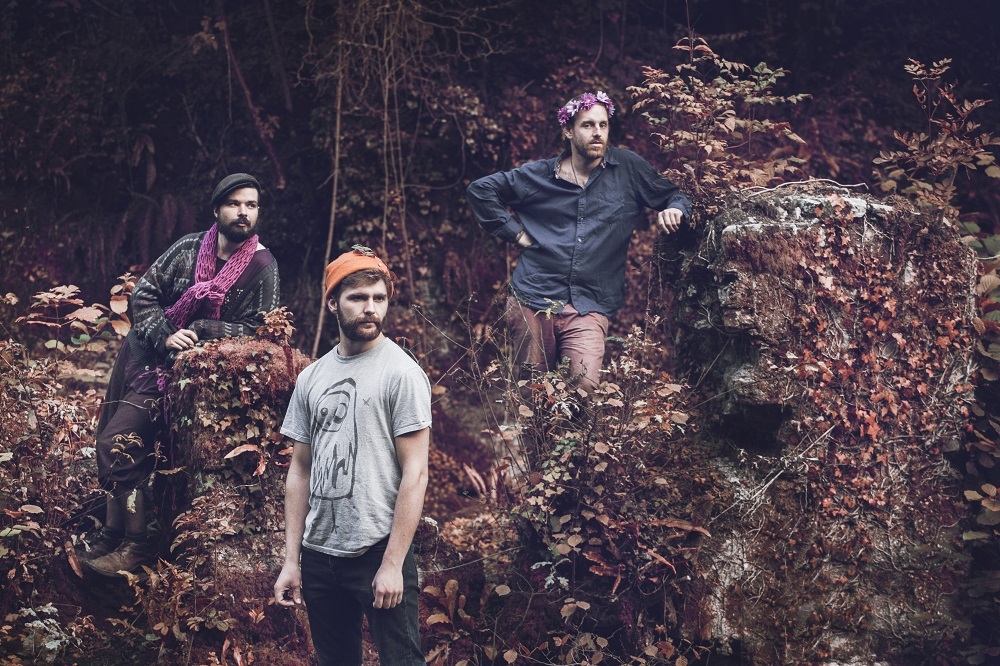 Tell us about your debut album Maladyne Cave, what’s it about?
Pain, struggle, inner torment, anger, childhood regression, an inability to take responsibility for our own shit. Y’know, everyday human condition stuff. For kids.

When did you write Maladyne Cave, and where did you record it?
The bones of the album is Liam’s songs and vision, formed over the last 8 out of his life and thoughts way before the band formed. Run that through 2 years of being played and tweaked with, Charlie and Izy recorded over a winter at Music Ape Studios, which is in a warehouse tucked away on a side street up Gloucester Road in Bristol.

It then took a good couple of years of overdubs, string arrangements, editing drums, over-perfecting everything whilst juggling our other projects and surviving. It’s a testament to the sound Liam, Izy and Charlie grew together from Liam’s songs taken to its absolute limit. We’re keen to get it heard and out there, but we’ve changed a lot in those two years it took to edit.

We’ve lost our old drummer, Charlie, and we’ve now gained Oli, who’s contributed so much to how we play these tunes now and the new tunes we’ve made with him, we’re impatient to get out there live and share it, refine it, make a fresh album out of it.

How does Maladyne Cave build on your style?
It emerged from our ambient dark jazz leanings into the heavy filthy riffs that we need to survive. The dimension the strings add to that already dense soundscape gives the tunes another world dynamic and harmonic possibilities to play with. 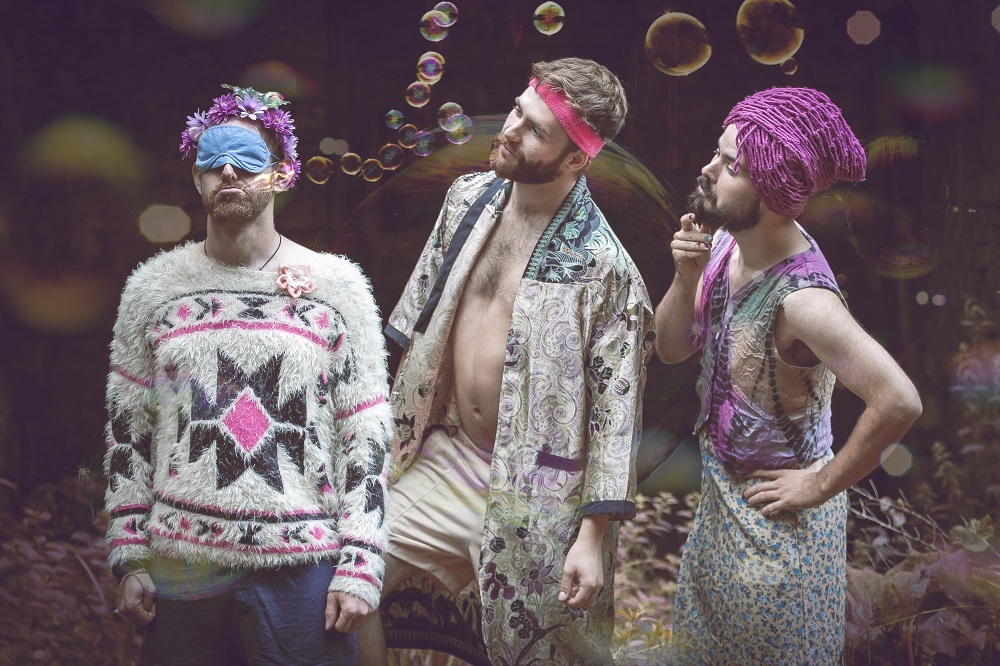 Can you talk us through each song?
‘PinP’ - Seems to reflect a relationship with a father that possibly feels detached from the world around. A number of the themes were developed on the piano before being converted to guitar. It’s also got one of the most wonky riffs on the album.

‘Anundena’ - This is an Arrangement of a Raga that was taught to Liam by Rajaswar Bhattachrya back in 2014. We’ve shifted the chords around under it but the core feel and melody is his. The riff at the end is something Liam first played with in 2009 as a kinda Live Drum and Bass thing. And the lyrics at the end seem to be laughing at the self seriousness and hypocrisy of religion.

‘Bucking Fecuz’ - The lyrics to this feel a bit like a jumbled collection of political and personal theories that fall into the repeated “I don’t know why I’m falling and losing myself” phrase that kinda spirals through the whole journey, which sits on this odd, dreamy pattern that came after listening to a lot of John Mclaughlin & Shakti.

‘Welder’ - A howl of despair at society’s rampant consumption of resources. It tells of our collective excess, hubris and compulsion to dominate for the sake of domination. It is also a celebration of the Earth which will inevitably outlast us. Welder was inspired by watching the oil rigs emerge from the Cromarty bay in Scotland.

‘Elska’ - A dangerously personal voyage into perceptions of love, expectation and projections of what “should” be meeting with what is.

‘Need No Other Lovin’ - An improvisation on the theme of a lullaby. A moment of calm.

‘My Dystopia’ - The original ideas came in 2010 after listening to Ravi Shankar and Phillip Glass’s album “Passages” on loop, and then wanting to recreate the feeling of bending time. Lyrically it came from hanging out with people who genuinely thought utopia was possible.

‘Mocha Narwhal’ - A primal jam the original groove of which was written playing along to a click track trying to get as far out of time before coming back on the beat. Turns out we missed the beat. Liam wrote the B section after watching the Turbans play 3 times in a row at Secret Garden Party and then locking himself away in the van and “being” them. The rant was written as a response to Izy’s obsession with Allen Ginsberg.

‘Come Through Me Now’ - A snippet of unfiltered subconscious thought. Originally an improvisation Liam recorded in the woods in Australia in 2013. Then listened to it over and over until he imprinted it in his brain.

What are your hopes for Maladyne Cave?
That it could help freaks to feel less alone. Maybe even inspire someone to do something they didn’t think was cool just cos it’s what they need to do.

What other plans do you have for the year?
Return to Europe in November and prepare our next album for pre-production in December.

Finally, if you could go back in time and give yourselves one piece of advice, when would it be and what would you say?
Liam: You are doing great and it’s all working out just fine. Izy: Do not let the perfect be the enemy of the good, and quit smoking.

Watch the video for ‘Elska’ on YouTube below. For news and tour dates go to myoctopusmind.com.