Intergalactic archaeologists Moviestar are lining up their collection of sci-fi infused punk-rock tracks for the release of debut album Stupid People / Happy Days in February 2018. Before that, you can experience the trio’s music when they go on a UK tour in October. We spoke to them about their origins and Rock n Rock music mission.

It’s sort of a metamorphosis kind of album, where we throughout the album seek to inform, inspire and guide people on the right way

First up, tell us bit about yourselves - what first got you into music?
President Supremius the 13th sent us back in time to restore history and reclaim the stone. To do this we had to form a Rock n Roll Group. So our main inspiration is from our scriptures. We thought Jimi Hendrix was a true God. We still believe he is. But you don’t understand he was painted on Icons in the holy Academy of Archeologists in our time. So him and many other of or Gods, like David Bowie, Marc Bolan, Bjørk and Freddy Mercury that are very current to this time are true inspiration to us. But it was really the mission from President Supremius that got us into music.

What brought you all together?
The mission to go back in time and save the world with Rock n Roll. And also save Rock n Roll, which will be key in a few years. We know you all love EDM at this point. But that is a real distraction and will not help in the revolution we are facing.

Were there any particular bands or artists you took inspiration from to form your musical and thematic style?
As we are mainly archeologists, we quickly started to study the archeology of Rock n Roll. Then we found these bands to become our main inspiration: B52s, Television, LCD Soundsystem, David Bowie, Bjørk, The Animals, Sonny Boy, Lou Reed and many more. Your current music history is so much more vast than we could ever had dreamed. We have so much more to learn. Please let us know about all your favourite bands and post them on our Facebook site.

You’ve been described as intergalactic archeologists. How has the cosmos influenced your music?
The reason we got sent back to execute this extremely high profile task was because we were the best archeologists of our time. The chosen ones in the field. So exactly how the cosmos has influenced us is mostly through the fact that we are capable of bringing our own timeline to the current timeline. The values now are very different to those in the future.

Most people don’t know that the so-called “cosmic” is not really a mysterious concept. It is physical and spacial with different perspectives in time and space. We do our best in merging our knowledge with the current frame of mind in our songs and the music we perform. Peace and harmony will not be found in this galaxy if we can not dance together and sing together.

Why the name ‘Moviestar’?
Not many have asked us this question yet. And it is a good question because it dates back to 3010 when the earth you live on now became inhabitable. A ship was sent out into space with records of your art, through DVD, Tapes, CDs and Vinyls. These Holy Documents were saved and recorded, but sadly many of them was lost. We had some in our archives of The Academy of Archeology, Magic and Telepathy. Your Moviestar, Rockstars and Art Stars of today have become ancient gods in our future. But the word Moviestar was the only word that was left of all this.

This we know now, that we are finally here, and we are so excited to go back in time to tell everyone that there are more types of stars and old Gods. Moviestar was meant as a homage name to all of these types of stars. 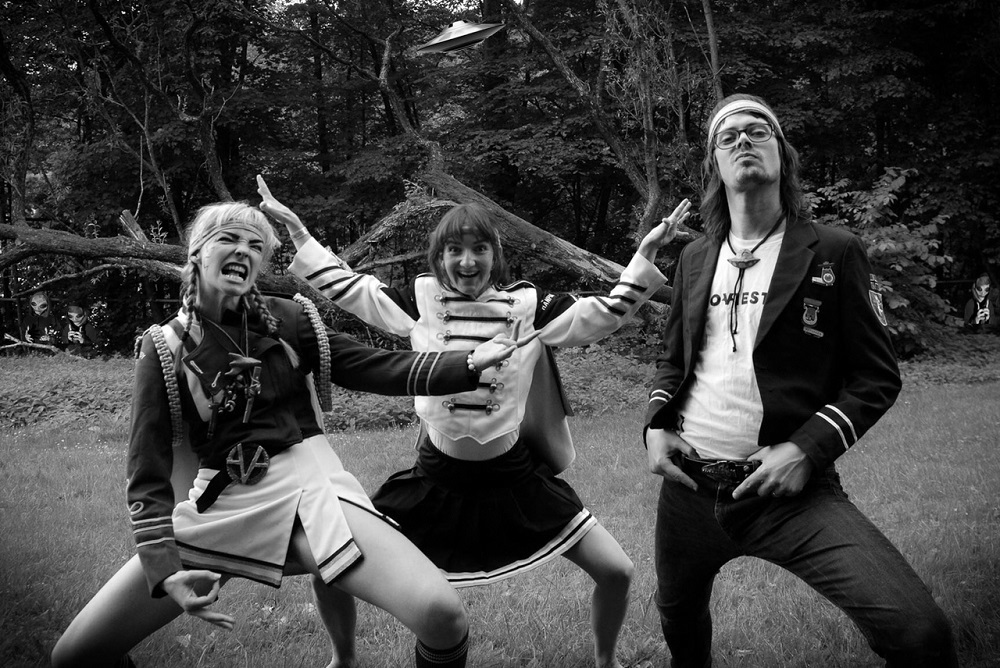 What’s been your best moments of 2017 so far?
We had a great moment at the Hope festival in the UK, where we met a Unicorn Squid-kid. It was a sign. And we played a gig. And then many more gigs in the great nation of the United Kingdom after the Unikorn Squid-Kid experiance. Also drinking coffee in the way Agent Cooper does in Twin Peaks has inspired us to enjoy coffee in an extreem way. We will never go back.

Tell us about your debut album Stupid People / Happy Days. What’s it about?
Well, the opening song is ‘Stupid People’. And the last song is ‘Happy Days’. So it’s sort of a metamorphosis kind of album, where we throughout the album seek to inform, inspire and guide people on the right way, so we together might find The Stone and prevent the metal wars from taking place in the future. That’s it basically.

When did you write it and where did record it?
It was done in a week in Norway, the safest country in the world at the time of our arrival. In a basement by the sea we spoke about what had to be done before we head back home to the year 5523 in 2030.

Tell us about the instruments you used on this album. I understand they were unique.
It’s basically what we found or were given once we landed in Norway in 2016. Infinity Vik plays a four-stringed guitar, a synthesizer and sings. The Octopus Goddess plays a 32 instrument and six-string guitar, bass pedals. Anaconda plays a drum kit and and synthesiser. We have come to learn this is not the normal format for a Rock n Roll Group, but we did not know this at the time of encounter. It has been a real challenge to learn to play in a band in such a short timeframe.

Which song was hardest to finish?
None. They all were really easy to write and record, since we knew what we wanted to say end express.

Which song are you most proud of?
‘Chosen Ones’, since it describes our mission and our way to this time of age. It will be the next single, due to be released mid November.

What are your hopes for ‘Stupid People / Happy Days’?
That people stop stupid people evolving then we will have Happy Days. Since our experiences and extreme knowledge from the future is easily adapted to this time of age, we know that talking plainly and using your so called metaphors is the best way of getting our knowledge through to you. So in these recording we have presented the particle theory of molecular disintegration, in the hopes that these guys at Cern finally might find the Higgs Boson; The God Particle that links us all together, past present and future.

The secret is that emotions function as the electromagnetic field of each human being. And it is only through true emotion we can make a quantum leap of change. Emotional consciousness is the answer to finding the Higgs Boson.

When and where can we expect to see you on tour next?
We are hitting it hard in the UK and will perform Rock N Roll Ceremony in October.

If you could collaborate with any living artist, who would it be?
Peter Hammill of Van der Graaf Generator, since he seems like the only person on earth, besides Sam Harris, to grasp the implications of the forthcoming travesty of the digital age. Peter Hammill has made it clear on several albums that mankind and womankind must stop seeking our abundance-strive of earthly goods. His seminal album with Van der Graaf Generator Still Life explains that in excess. Infinity Vik would also like to kiss James Murphy for his extreme lyrical genius.

Finally, if you could go back in time and give yourself one piece of advice, when would it be and what would you say?
It would be in 2019. We would say what Roy Batty said in Blade Runner: “All those moments will be lost in time, like tears in rain. Time to die”.

Listen to ‘Stupid People’ on SoundCloud below. For news and tour dates go to moviestartheband.com.