Canadian rap duo Mob Bounce is The Northwest Kid and Heebz the Earthchild. They write lyrics about culture, spirituality, sustainable living, healing, Mother Earth and awakening a warrior spirit. We caught up with the pair to chat about new single ‘Sounds of You’.

‘Sounds of You is about being able to be comfortable within your own heart, mind, and your own vibration.

First up, tell us a bit about yourselves - what led you teaming up as Mob Bounce?
NWK: We were childhood friends who drifted apart and came back together in post secondary. I (Craig) was networking with producers, singers, and filmmakers in Vancouver and Travis approached me with the idea. After plenty of FB conversations he (Travis) came to stay with me for four months in Vancouver; it was during this time that I introduced him to the people I had met and we started to hash out the first project.

EarthChild: We were both passionate about pursuing music and we both fed off one another really well when it came to writing bars. We were influenced by similar things at the time and that really helped us develop as artists and as Mob Bounce. We both lived in the same town as youth as well so our story had similar textures.

Who do your take inspiration from?
We were influenced by John Trudell, J Cole, Common, Kanye West, Kid Cudi, Outkast, Lil Wayne, Kendrick Lamar, and A Tribe Called Red to name a few.

Why the name ‘Mob Bounce’?
We were passing name ideas back and forth over Facebook. We tried several names before deciding on Mob Bounce. At the time we were looking for something that sounded fresh but also had a hip hop nostalgia to it. We later came up with the phrase “Mob is the People, Bounce is the Movement.” Mob Bounce as a project really came into its own as we grew and connected our culture to the music.

How would you describe your musical style?
We have had many influences growing up and with our combined influence, we have been able to form our own sound and style of rapping. We have been influenced by many rappers, musicians, artists, poets, and writers. Our sound never stays tied down and has always been changing.

If you could collaborate with any living artist or band, who would you choose?
NWK: Making a song or project with The Black Keys would be pretty special. I loved the blues and rock vibes that they have and admire the work they have done with other Hip Hop acts.

EarthChild: I’d like to work with J Cole or Kendrick Lamar. I think I would really grow as an MC being in the same room with those guys. 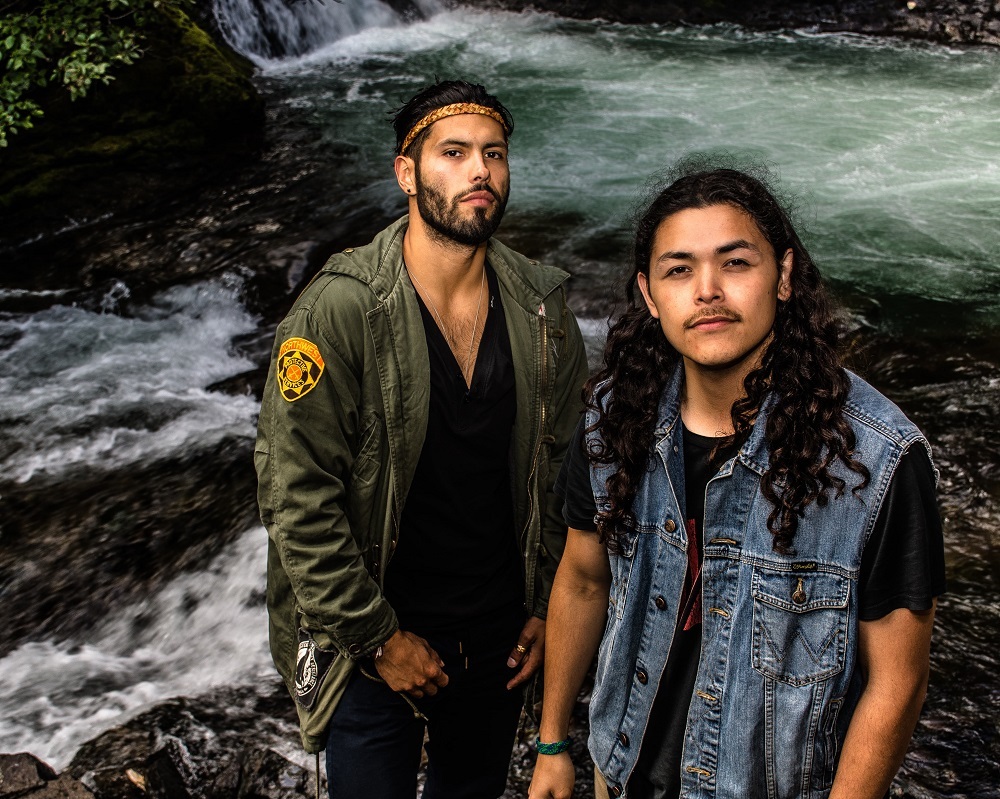 Tell us about your new single ‘Sounds Of You’, what’s it about?
It’s about being able to be comfortable within your own heart, mind, and your own vibration. With that comes self discovery, authenticity, and being able to speak your truth.

When did you write ‘Sounds Of You’, and where did you record it?
EarthChild: The production side of it was in development long before the song was finalized but it was around 2017 when the song idea started to take shape. I wrote something for it and added some singing/chanting to the track and I approached craig with the beat and I believe he had a verse already written that fit really well with the song. We began performing it and started to live within the track a bit more. We did the final recordings at Monarch Studios in Vancouver at the tail end of 2018.

How does ‘Sounds Of You’ represent your style? EarthChild: With the digital and analog combination and the progression of the track, we are given a strong and dynamic foundation to share our message. We have always experimented with production and never really stuck to one formula. Once Boogey the Beat (Producer) and Kenton Loewen (Drummer) came through to add in flavour, the track really took on a life of its own and had multiple textures of influence layed down.

What are your hopes for ‘Sounds Of You’?
We hope people connect with the message and are able to dance it out all in one. Combining conscious content with really groovy beats is a way for us to feel strong and confident in sharing our words with the audience but also not making it too melancholic or forced.

‘Sounds Of You’ is taken from your forthcoming EP ‘Transformation’. Can you tell us more about that?
The songs that have been combined to make this EP have been developed over the past few years. We have taken organic methods to create and develop the songs. We performed these songs to many audiences before ever releasing recordings.

It’s a more backwards approach but once we came into the studio to do the final recordings we really embodied the lyrical performance and the songs provided more depth in return. It has 6 tracks in total but each song has its own vibe and stands strong on its own. We can tell you more but you will just have to listen to it.

What other plans do you have for the year? Where can we see you on tour?
We plan on finishing off our summer show dates in Vancouver, Victoria, Merrit, and Attawapiskat. We plan on doing a Sacred Space Tour this winter through an amazing non-profit youth initiative called N’we Jinan. We hope to connect with the next generation and share what we know about lyric writing, beat making, and song structure.

Finally, if you could go back in time and give yourselves one piece of advice, when would it be and what would you say?
EarthChild: I’d probably go back several years and just tell myself to collect more knowledge and explore more boundaries in music.

Watch the video for ‘Sounds of You’ on YouTube below. For news and tour dates go to the Mob Bounce Facebook page.