Mark Hegan is a singer songwriter from Bangor, Northern Ireland, currently based in London. We previously spoke to Mark when he was part of In An Instant in 2016 (read the interview here). He’s about to release debut single ‘Skyward’ so we caught up with him about his solo material.

There’s nothing more you can do than write from the heart and hope for the best; it’s never a done deal. That’s all part of the excitement though, isn’t it?

When we last spoke to you, you were in the band ‘In An Instant’. You’re now a solo artist - what’s led to the change to go it alone?
I think we all just needed a change, it’s as simple as that. Sometimes bands burn out, and that’s OK. From time to time though, I can’t help but find it tricky on my own; I miss having others to fall back on when the going gets tough, but going ‘solo’ doesn’t necessarily mean going it alone.

I’m blessed to have incredibly talented friends who will always give me honest takes on my work and a wonderful girlfriend who constantly keeps me on the straight and narrow. As for the In An Instant days, I’m very proud of all we accomplished and the music we put out together. The rest of the band are all amazing musicians and I wish them the very best of luck in the future.

Were there any particular bands or artists you took inspiration from?
I’m always looking for new acts to take inspiration from and there are plenty of great ones out there. Unfortunately, I think that because it’s so easy to be discovered by an audience these days that sometimes, as a listener, it can be quite hard to find something meaningful. That probably doesn’t make much sense… I just think that with so many acts fighting for attention through the likes of Instagram, Soundcloud, etc, it’s so easy for artist and listener alike to get lost in the noise.

I find it more difficult to build a relationship with acts these days because of it which is sad. Saying that however, I love what Sam Fender has been doing recently; he’s been a great source of inspiration over the last year or so and I’m really excited for his new album to blow us all away. Christine and the Queens is another act I’ve been following closely for the last three or four years and am continuously amazed by; her Glastonbury set this year was spell binding!

I have two inspirations that will always be in a league of their own however: U2 and Bruce Springsteen. It would take me next to forever to try and explain what those acts mean to me, so I’ll try and keep it brief… maybe.

I heard a fan once describe listening to Bruce Springsteen’s music as akin to looking through someone’s family photo album, a statement I couldn’t put better myself. Bruce has an almost unparalleled ability to write songs that place you in a moment you recognise and relate to vividly; his themes of resilience in the face of defeat have always made perfect sense to me, and I do my best to channel that feeling in my work. I still remember where I was the first time I heard ‘Thunder Road’. Pure, unfiltered magic. As for U2… please don’t get me started, I genuinely don’t have the time. Bono and the lads are legends.

How would you describe your musical style?
Ah, the trickiest question for a musician to answer. I’ve always led with my heart in terms of music, and the overall message has always been king. I guess my inspirations inform my style, but no matter how much I’m inspired by a particular artist, my message will be my own and I’ve worked extremely hard over the years to make that my greatest strength. Sonically, ‘Skyward’ has electronic, singer-songwriter and indie/rock vibes so I guess my musical style is somewhere in that mess…for now anyway.

If you could collaborate with any living artist, who would it be?
There are too many to choose from. I think I’d be far too scared to collaborate with any of my heroes in case they thought I sucked, so that’s a tough one. Maybe Paul Simon, if I could coax him out of retirement… 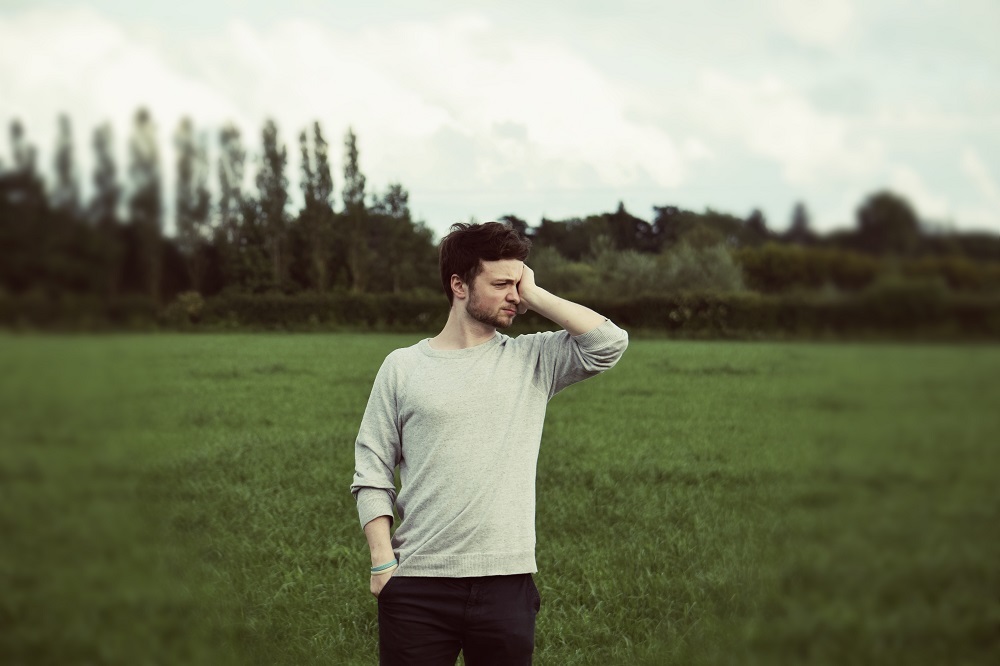 Tell us about your debut solo single, ‘Skyward’. What’s it about, what are its themes?
‘Skyward’ came about shortly before I moved to London from my home in Northern Ireland last year. Around that time, I was struggling with my identity and sense of place in the world an awful lot, and I think that comes across clearly in the track. It’s an overwhelmingly cynical song too, almost ridiculously so, yet I believe it speaks of a place that many people inhabit, whether they care to admit it or not. That’s the great thing about writing songs; you get to speak your mind to an audience without actually having to talk. There’s a beautiful anonymity to it all.

Listening back to the song now, it seems like it came out sounding pretty angry, which is an absolute first for me. I’ve never really related to angry songs let alone written them, maybe because I’m not a very angry person, but ‘Skyward’ came out sounding almost bitter. Like most of the songs I’ve been writing over the past number of years, there’s resilience in there somewhere, but I don’t think it’s particularly obvious in this track. Perhaps that’s where a lot of the power comes from, the fact that there’s no clear resolution. Who knows!

When did you write it and where did you record it?
I started writing the track towards the end of last year. It was one of those songs that just fell into existence out of nowhere, and I’m very grateful for that. I think a large part of songwriting, and I guess any art creation, is contacting your subconscious. The subconscious is where great melodies come from and often great ideas, the hard part comes later when you have to piece it all together into something that actually makes sense to the listener and yourself.

With ‘Skyward’, both stages happened pretty much at once which is very unusual for me. I didn’t have to wrestle to find out what I was trying to say and that was a welcome change.

The recording process on the other hand, was an absolute slog. I guess I didn’t have anyone telling me to stop working, which meant that I was always tinkering on something, a guitar, a vocal, whatever. That’s always been my problem, I never know when to stop.

There’s always something more to do which can lead to near breakdown at times but, in the end, I’d rather be far more focussed on making the best work I can than not. Nearly everything you hear on the track was recorded and mixed by me too, so in a lot of ways I’m relieved the song doesn’t sound like a complete train wreck. Well, I guess the listener will be the judge of that, won’t they?

How does ‘Skyward’ represent your style?
I never go out of my way to make a song fit a particular style, it just happens. I think I have a clear lyrical style now, and ‘Skyward’ is very representative of that, but it’s hard to tell when you’re the one writing the song. The problem with songwriters is that they get so caught up in their own music they’re rarely able to see the wood for the trees, myself included!

What are your hopes for ‘Skyward’?
Every artist writes in search of creating that moment when everything suddenly makes sense for reasons no one can put their finger on. I would love ‘Skyward’ to be well received and listened to as much as possible, that’s the standard answer, but my real hope is for it to make a connection with someone somewhere, even if it’s a small one. In the end though, there’s nothing more you can do than write from the heart and hope for the best; it’s never a done deal. That’s all part of the excitement though, isn’t it?

What can you tell us about your plans for the rest of 2019?<br ?> I’ll be gigging in and around London a great deal and have some more singles lined up between now and the end of the year. I’m always recording too so that keeps me busy when the gigs aren’t so full on. Hopefully I’ll start finding more musicians to gig/tour with as well… the fun never stops!

Finally, if you could go back in time and give yourself one piece of advice, when would it be and what would you say?
The best advice for an artist I’ve ever heard was given by my hero, Mr. Springsteen when he was the keynote speaker at SXSW a few years back. He said something along the lines of “the best artists in the world are the ones who were told they weren’t worth shit by one guy, and that they were the next coming of Christ by another…and believed them BOTH.” If I could go back a few years I’d tell myself something like that…believe the hype AND the hate. That’s a fool-proof mantra.

Watch Mark Hegan sing ‘Every Minute After Midnight’ on YouTube below. For news and more music, head to Mark Hegan’s Facebook page.