Brighton-based artist Luvia has just released new single ‘Hunted’ ahead of shows at The Great Escape, Live at Leeds and Liverpool Sound City. She’s inspired by spoken poetry and story telling through her lyrics, and we caught up with her to find out more about her music.

I hope that people hear ‘Hunted’ and that it resonates with them, if people can relate to the songs and lose themselves in them then I’m doing something right, fingers crossed!

First up, tell us bit about yourself - what first got you into music?
My parents and my Grandad got me into music initially, lots of long car journeys and my house was like a constant musical growing up. I think the first time I played the guitar, though, was around a fire in Ireland with my Grandad playing the blues, I then quickly realised that music was a great way of expressing all of the crazy ideas that I have. For example, when I write a song I tend to think of a visual first or a storyline, I like to create characters and play on themes and theories.

**Were there any particular bands or artists you took inspiration from? **
Lots of inspiration from Nancy Sinatra and Lee Hazel, but also Kate Bush, Stevie Nicks and, of course, David Bowie.

How would you describe your music style?
I like to say it’s cinematic pop, although I think ‘Hunted’’ was just touching the surface. The rest of the music that I’ve been working is much more in tune with the cinematic pop style that I’d like to achieve, it’s definitely more experimental in it’s themes and lyrics which I’m really excited about sharing. I’m currently working on introducing those themes into the production.

If you could collaborate with any living artist, who would it be?
I’d love to work with Grimes and go down a more dance route perhaps, or even Mark Ronson, that would be great hah! Actually, let’s be honest, it’s gotta be Stevie Nicks. 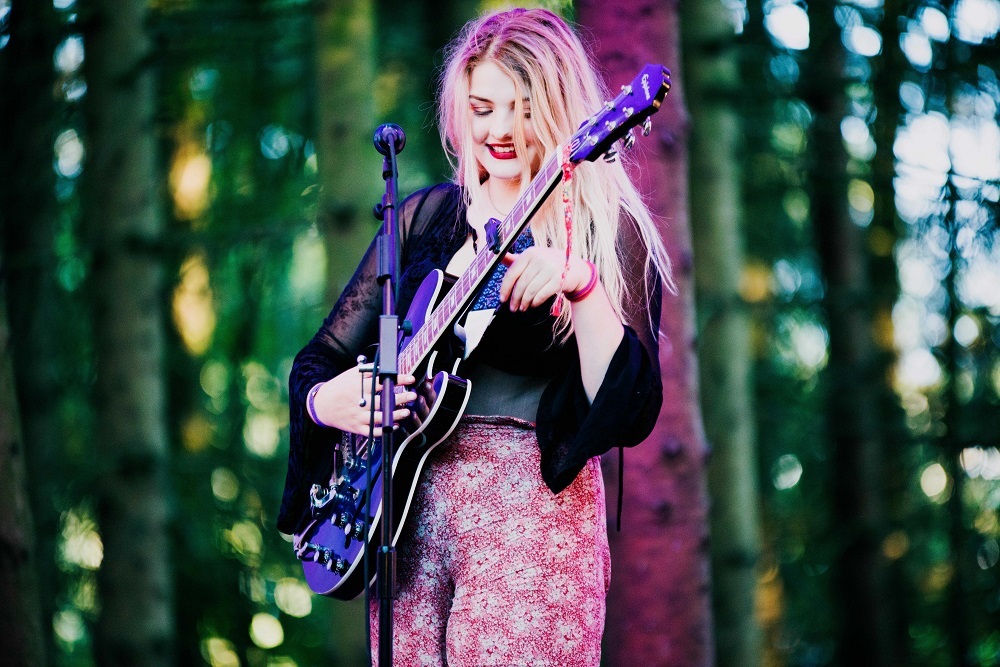 Tell us about your latest release, ‘Hunted’. What’s it about, what are its themes?
‘Hunted’ is about personal evolution, she starts off as a rose and eventually becomes the lion. The chorus represents the highs of life and how you can get swept away with them whereas the desert is the low part where she always seems to return. However each time the character has learnt more and has grown for her experiences. At the same time I wanted it to sound very dark and romantic like a Masquerade Ball but with themes of the desert too.

When did you write it and where did you record it?
I wrote it in the summer at home in Seaford, and recorded it with Dan Swift near Brighton.

How does ‘Hunted’ build on your style?
‘Hunted’ was everything I wanted to sound like at the time, and I think it was a step in the right direction for sure, but definitely only touching the surface of what I want to produce. I’m now at a point where I’m expanding on the themes that I write about and finding ways to create that atmosphere in the music, definitely still cinematic pop, but something else too - lots of evolution it seems!

What are your hopes for ‘Hunted’?
I hope that people hear it and that it resonates with them, if people can relate to the songs and lose themselves in them then I’m doing something right, fingers crossed!

What can you tell us about your plans coming up?
There’s going to be a lot more performing, lots of festies and gigs! I’m currently working on an EP at the moment so lots more singles on their way too - it’s all happening!

If I could go back in time and give myself one piece of advice, when would it be and what would you say?
It would be to slow down. I feel as though people feel like they’re letting themselves down if they haven’t achieved enough by a certain age, or they haven’t achieved as much as someone else, it’s easy to forget how important it is to learn who you are first and to experience your own life before you dive in the deep end. Contrastingly, though, it would also be to learn as much as you can musically so you’re able to freely express all of these crazy ideas that you have, hah!

Watch the video for ‘Hunted’ on YouTube below. For news and tour dates go to Luvia’s Facebook page.