Luke & Mel met performing in the UK’s touring theatre show Country Legends, and went on to mix haunting harmonies with fine musicianship. “Somethin’ About A Woman” won them the Song of the Year award at the British Country Music Awards 2015 and a new mix of the song features on a double A-side with “Bad Habit”. They’ll be co-headlining a UK tour with Gary Quinn in September, visiting cities including Newcastle, Glasgow, Manchester and London - we found out more about their big year.

2016 - what is your goal?
Our 2016 goal is to play to as many new people as possible. It’s all about expanding our reach this year!

Did you make any new year’s resolutions?
No, we’re perfect.

What was the biggest lesson you learnt in 2015?
Chris Stapleton.

What was the musical highlight of 2015?
Winning British Country Music Awards (BCMA) Song of The Year for our song “Somethin’ About a Woman”.

Who are you excited to hear from in 2016?
Chris Stapleton.

Tell us about the record you have just released…
The single is called “Bad Habit” and will feture on our upcoming EP. It’s a song about girls or guys who choose the wrong person but can’t let go of them… or can they? 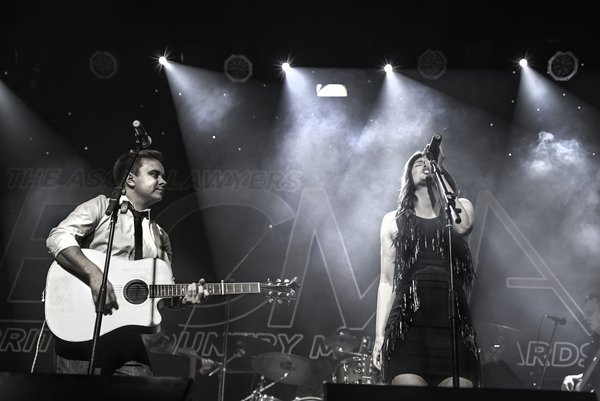 If you had to pick three artists to be filed next to, who would they be and why?
Our all time favourites are Vince Gill, Brad Paisley and Miranda Lambert. Vince for his sweet soulful voice and smooth guitar tones, Brad for his brilliant song subjects and Miranda for her kick ass girl power attitude. (Mel said the last one!)

What inspired the record?
The single “Bad Habit” was inspired by bad relationships that both of us had before we met. Sometimes when you love someone it’s hard to let them go even though you know you have to.

If you could jam with one artist alive or dead, who would it be?
Chet Atkins… he was one of the best guitar players that ever lived and we would love to steal some of his licks.

If you could have written one song by another artist, what would it be?
“I Will Always Love You” by Dolly, that song has been covered by many big artists so we would be very rich!

Someone is making a film of your life, who will play you?
Adam Sandler and Kate Beckinsale.

Lastly, tell us one thing you have never revealed in an interview.
Luke is actually The Stig.

For the latest news about Luke & Mel, including full tour dates and releases, go to www.lukeandmel.com/.