Irish singer-songwriter KTG - aka Katie Gallagher - releases her debut mini-album, Searching For Magpies, on Saturday, September 26th. We caught up with her to chat about her new music, and ‘Blue’, which placed at number two on the iTunes singer-songwriter charts.

‘Searching for Magpies’ mirrors my total, irrational obsession with the old wives tale regarding magpies.

First up, tell us about yourself - what first got you into music?
Well I was never good at sports - a pure bench warmer - and I needed something, so my mother put me in for music lessons since I was five and it really has been my passion ever since!

I think when I was in secondary school I started to use it more as a needs of self counsel when I started song writing. The idea of getting to use my thoughts and experiences (or others for that matter) and turn them into a product that I could go back to when I felt a certain type of way was really appealing to my younger self and has stuck with me ever since!

Were there any particular bands or artists you took inspiration from?
I adore One Republic and I love their writing style and really wanted to pay homage to them in my own lyrics. I also love all types of music and try to pull inspiration from all the music I listen to. I think rap music is so clever and love to try and bring that into my own lyrics - whether I am or not is another question but I can try!

How would you describe your musical style?
This is becoming a tougher question the longer I am in the music business! At first I was alternative country and then folk and then moving into the folk/pop era with my debut album. However I really want to experiment with RnB and maybe even hip hop and rock! So to make a short answer long - I would describe my musical style as scattered .. . like me hahaha!

If you could collaborate with any living artist, who would it be?
Without a doubt it would be Lewis Capaldi! Purely for the laughs and just to be in a room with him! I think his talent is unreal! His lyrics are perfect and I want to marry him!

Why ‘KTG’?
My real name is Katie Gallagher, so its just my nickname throughout my life and I thought it sounded really cool! I also think that its nice to have a separate name because I am a full time music teacher.

Your last single, ‘Blue’, placed at number two on the iTunes Singer-Songwriter charts. What did that mean for you?
Every time I release a song I always think that it will never go anywhere in the charts because we live in such a Spotify-driven world but when ‘Blue’ got up there I was so proud because it shows that the people who support me are really dedicated and don’t mind spending money on my music! That success continued over this summer with the singles I released under the Beardfire Label, whom I am signed to, and it’s very surreal! 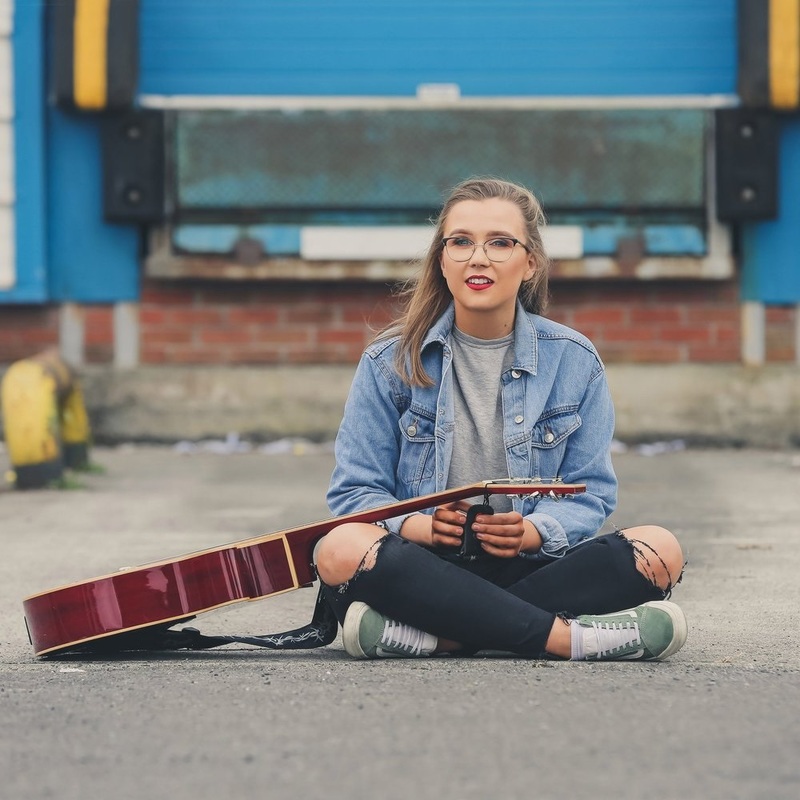 Tell us about your debut mini-album, Searching For Magpies. What’s it about, what are its themes?
The album mirrors my total, irrational obsession with the old wives tale regarding magpies.

I didn’t realise how superstitious I was about these winged creatures until I was in Drumcondra for college, where magpies like to populate (or so it seems). It became a fun game to search for a second magpie if I only saw one and so on. I even had my friends searching for them for me by the time my four years in DCU were completed.

There are lots of themes from going out and enjoying life, to anxiety, to infidelity, to love.

When did you write it and where did you record it?
Since it is my debut album I had chosen some new songs - for example Lost Boy was finished that morning of the recording session! And some old songs like Never Go Home which I wrote at the very beginning of my song writing career. So it was really nice to have a mix of the old and new KTG. I recorded the album in Beardfire Studios, Dublin.

Beardfire is also my record label and run by the amazing team: David Virgin, Rohan Healy and Al Quiff. It was a crazy time for me when we were recording it because I was in the thick of final year placement and running my own business too but the lads just calmed everything right down and we actually had the best time and I want that to shine through!

How does Searching For Magpies represent your style?
The mission with this album was to make every song embody a different vibe. From the moment I started this music journey I always found it difficult to grasp the idea of being ‘boxed into one genre’. I hated it.

The concept of sticking to one genre really blocked me from writing and creating music that I actually enjoyed performing. This album shows that, as every song is ‘folk’ mixed with something! From folk-pop in ‘Don’t Tell My Mother’ to funk in ‘Strawberries’, I think this really shows the listener who I am in a style sense because I try every style and make it my own.

Can you talk us through each song?
So each song is linked to the rhyme … but in reverse order.

‘Don’t Tell My Mother’… seven for a secret never to be told (because the character in the song doesn’t want to admit she has given the person who hurt her another chance).

‘Home Farm’… six for gold (this is a song I wrote for my landlord and landlady, who I stayed with during my whole college life, for their 40th wedding anniversary- their love is golden!).

‘Get Your Story Straight’… five for sliver (based on a character who has been cheated on and now she is coaching her lover to tell her a convincing lie as he comes to her to face the music).

‘Lost Boy’… four for a boy (this song is really personal because it’s about a broken relationship, but also about learning that you can’t fix everyone and you shouldn’t have to. It really helped me learn to just walk away from a situation that I knew I could do no more with.).

‘Never Go Home’… two for joy (this one is a fan favourite and always gets people up and singing and dancing!).

‘December’ (recorded live at Beardfire Studios, Dublin)… one for sorrow (this song was unplugged because I wanted it to be as bare as possible - it deals with the anxiety that I can’t really manage from time to time and asking yourself some really hard questions).

What are your hopes for ‘Searching For Magpies’?
My hopes for this album is just that people get a better insight into me and my music. I am so proud of all the work that has been put in by me and the Beardfire team. I also hope that other people resonate with the music and hopefully can share their own stories with me when I go out touring and get talking to fans!

What can you tell us about your plans for the rest of 2019?
So musically I’m gearing up the Magpies Tour in late September/ October, this will be all over Ireland and I am announcing those dates very soon! Last Saturday also saw the start of work on album number two and the Beardfire team and I have decided to release a brand new single in October to celebrate my birthday (LIBRA SESSION WOO!) and that single is called “Get Out” and its a really cool RnB style track!

Finally, if you could go back in time and give yourself one piece of advice, when would it be and what would you say?
If I could go back to the very start of my music career I would definitely tell myself that it’s okay not be stuck in one genre. I was always beating myself up and annoyed at myself for not being able to write and create music that stuck to the rules of one specific genre. I would tell myself to just go with the creative process and enjoy it a lot more!

Listen to ‘Strawberries’ on SoundCloud below. For news and tour dates go to the KTG Facebook page.