Musician, filmmaker and artist John Wallace Wheatley is the frontman of band Suburban Dirts, but he’s stepped back to make solo album Spent the morning watching TV and looking through my phone. We caught up with him to find out more, including the chance encounter that proved to be the inspiration for the LP.

First up, tell us about yourself - what got you into music ?
I’m a happily married father of two from Hertfordshire, UK. My day job is in the film industry, but I also write and produce music for other artists, make films and animations and host events and festivals whenever I can.

When I was very little I would watch the documentary This Is Elvis on a loop and on long car journeys my parents would play John Holts’ 1000 Volts of Holt and various Motown and Stax compilations. In my teens The Beatles and Nirvana inspired me to learn guitar, around that time my Uncle Donald, father of Donald Byron Wheatley, introduced me to Bob Dylan, The Band and Sam Cooke amongst others. It was quite the education.

Were there any particular artists or groups you took inspiration from ?
Songwriters have always been my main source of inspiration; Carole King, Holland Dozier & Holland, Smokey Robinson, Ashford & Simpson, Lennon & McArtney, Dylan, Leiber & Stoller. . . All the best ones.

How would you describe your musical style ?
With this album, I would describe it as 50 percent self-conscious soul-pop and 50 percent existential mellotron-rock.

If you could collaborate with any living artist, who would it be ?
Don Hertzfeldt is a writer/animator that makes these incredible short films that stick with you for months. I can watch them over and over again. His style was a big inspiration on my album artwork and animated videos. Hopefully he won’t sue me for that.

Tell us about your new album ‘Spent the morning watching TV and looking through my phone’. What’s the inspiration behind it ?
One day my wife and I were walking through Bunhill Fields Cemetery in London. We checked out William Blakes grave and then decided to leave, on our way out a huge black headstone caught our eyes. On closer inspection the headstone read “Here Lies John Wheatley”. I believe that moment had a profound effect on the making of the album.

When did you write it and where did you record it ?
I wrote most of it during the recording of Donald Byron Wheatley’s ‘Moondogs & Mad Dogs’, another album that I’m very proud of. At the time I was driving a skip truck to pay the bills, I found an old beaten up kids electric guitar with strings missing in a skip one day and kept it in the cab. I worked on a lot of the songs on tacho breaks. 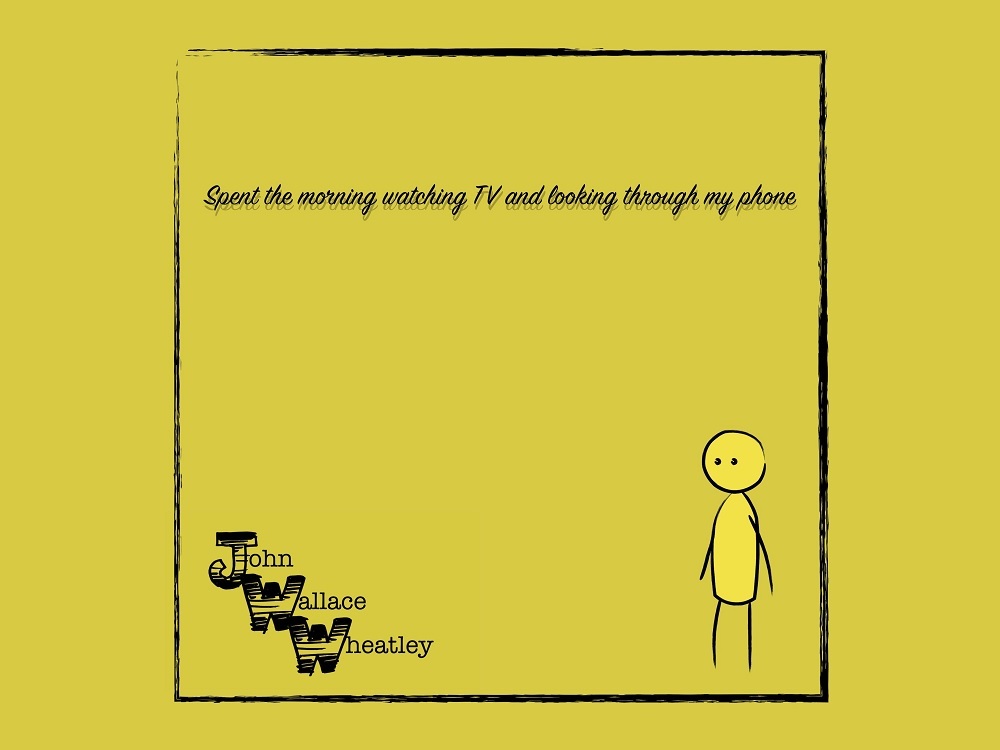 How does Spent the morning… represent your style ?
My band, Suburban Dirts, had been involved in the Americana scene for a few years and, despite loving the genre, it only reflects a very small portion of my interest in music. I wanted to do something that incorporates my love for soul, rock, pop and everything else.

You’re releasing Spent the morning… independently. How are you finding that experience ?
Well, if I had known I’d be doing this at the start I’m not sure it would have happened. I had interest from a cool record label and that encouraged me to record the album, I guess at some point during the process they lost interest, oh well, we move. I’m also handling my own PR, creating my own animated videos and designing my own album artwork. If it wasn’t for the Covid lockdown I wouldn’t have had the time, so every cloud…

Can you talk us through each song ?
With pleasure! The album is split into two distinct halves. Side A is in the style of self conscious soul pop and side B is in the style of existential mellotron rock. Each side begins with a different version of ‘Cemetery Smokes’. The two versions are supposed to represent the different ways you could perceive seeing your own name on a gravestone. The life affirming upbeat soul pop of the first version or the existential crisis dirge of the latter.

I’m a big fan of the songwriter - Gregg Alexander of The New Radicals, most notably their 1998 record Maybe You’ve Been Brainwashed Too. I think the album is pretty underrated, but I’ve always loved it. I definitely had it in mind when making my record but its influence is most present in ‘Heartstrings’. A song in which I spend the first half showing my disdain for music industry phonies before getting a sniff of success and becoming one myself.

‘Last Man Standing’ is possibly the oldest song on the record. It’s sung from the perspective of one of those guys that never grew out of his early twenties and chose all night cocaine binges over family and friends, to the point where he has very little of either left. When a friend first heard it, he thought it was about how I carried on clinging to the dream of success in music when everybody around me had moved on. Fuck! I hope not.

I’ve always wanted to make a record like the happy toe tapping ones you used to find in film montages, such as ‘You Make My Dreams’ by Hall & Oates. ‘Neurotic Dancer’ was my attempt at that. It started as a joke. I tapped out a drum beat on my kids’ Casio keyboard and then sung and played the piano to it in a cheesy pop style. It’s one of my favourites on the album.

‘In The End’ closes side A with a Beach Boys meets Oasis feel. My daughter, Bo, plays the flute solos. She’s since given up on flute but she plays a mean piano.

‘World War III’ has existed in many different rhythms, keys and chord sequences but this is the one I landed on. The verses are influenced by Arctic Monkeys and The Beatles and the chorus was my attempt at sounding like a song from The Flaming Lips’ ‘Soft Bulletin’. Another album I will always love. My son, Sid, has a vast collection of action figures, which I made use of in the stop motion video in a kind of animated comic book style.

At the time of writing ‘The Singularity’ I was listening to Father John Misty. I believe his song ‘Holy Shit’ is one of the all time greats. When recording the album I was Musical Co-ordinator on the Queen biopic, Bohemian Rhapsody. You can clearly hear Brian May’s influence on the guitar solo.

The final track on the album is ‘The Morning Never Came’. It’s inspired by the idea of your life flashing before your eyes in the moment you die. In that split second you are unconfined by time and your mind can experience thousands of years. In this song our protagonist comes to the decision that “none of this was meaningless”, not even spending the morning watching TV and looking through your phone.

What are your hopes for Spent the morning…?
I hope it makes the people that listen to it feel better than they did beforehand.

How’s the rest of 2020 and into 2021 looking ?
During lockdown I have been working on a series of animated shorts called ‘Going Up ?’, my friend and mellotron player on this record, Andy Fairclough has written and recorded some amazing music for it and we had the pleasure of Gwilym Lee, who played Brian May in Bohemian Rhapsody, guest performing some wonderful voice work. Hopefully you’ll get to see it some time next year.

I’m also currently arranging and co-producing the second album from my cousin, Donald Byron Wheatley. So far it sounds incredible. So look out for that too.

Finally, if you could go back in time and give yourself one piece of advice, when would it be and what would you say ?
There’s nothing I could tell my stupid younger self that would have any kind of positive effect because my stupid younger self is an idiot and wouldn’t even know how to process sound advice, so I would use the opportunity to visit Miami in 1963 instead, specifically Sam Cooke’s performance at the Harlem Square Club.

Listen ‘Neurotic Dancer’ below or head to John Wallace Wheatley’s Bandcamp page to listen to the full album, purchase digitally or pre-order the CD released Friday, November 27th. For the latest news, find John on Facebook, Twitter and Instagram.