West Lothian four-piece Indigo Sixteen make indie/punk music described as a high-octane mix of Joy Division, Miles Kane and Blondie. They’ve just released new single ‘Bring On the Rain’ so we caught up with Stephen Mallin (vocals/guitar) and Andrew Stears (bass guitar/vocals) to find out more about the band.

“Bring on the rain” is sometimes what needs to be done if you want to get the best out of life and, ultimately, not to let troubles you face hold you back or stop you doing what you want to do.

First up, tell us bit about yourselves - what first got you into music?
Stephen – What got me in to music - funnily enough the first interest I had in pursuing music was when I first played guitar hero when I was 11. I eventually learned to play guitar and grew a thirst to write and create my own songs as I got older. In 2013 I formed indigo sixteen with the rest of the guys and the rest is history.

Andrew – I got into music when I was around 12/13, which felt a bit late compared to others who were also studying around me at the same age. I started on saxophone, but the bass and guitar eventually caught my attention. Practicing along to bands I enjoyed and bass lessons at school led to finding a new band, and the process would start again.

How and when did you form the band? What was it that brought you together?
We formed in 2013 when we were all still in high school. Andrew and Stephen had just finished with a previous band, but were still looking to play. Callum and Matt knew Andrew through a school wind band, and were looking to start a band of their own. Simplest solution, bring everyone together!

Were there any particular bands or artists you took inspiration from to form your musical and thematic style?
Bands from the past such as Joy Division, The Smiths and The Jam (to name a few) influence our writing and playing, and modern day bands such as Kasabian are inspirations

How would you describe your style?
Alternative rock and indie/punk. When we played at King Tut’s Wah Wah Hut I 2014, they described us as “[a] sparky mix of cranked-up indie rock that comes over like a high-octane mix of Joy Division, Miles Kane and Blondie at their sharpest”

What’s changed most about the band since you formed in 2013?
I’d say that we are definitely more comfortable to express opinions from all corners. We are not as naive either I don’t think. Some songs we played in 2013 which are pretty average compared to our stuff now but at the time seemed amazing, for the simple reason I think that we were just getting a buzz from creating something from nothing. We understand more now that there is a “standard”. 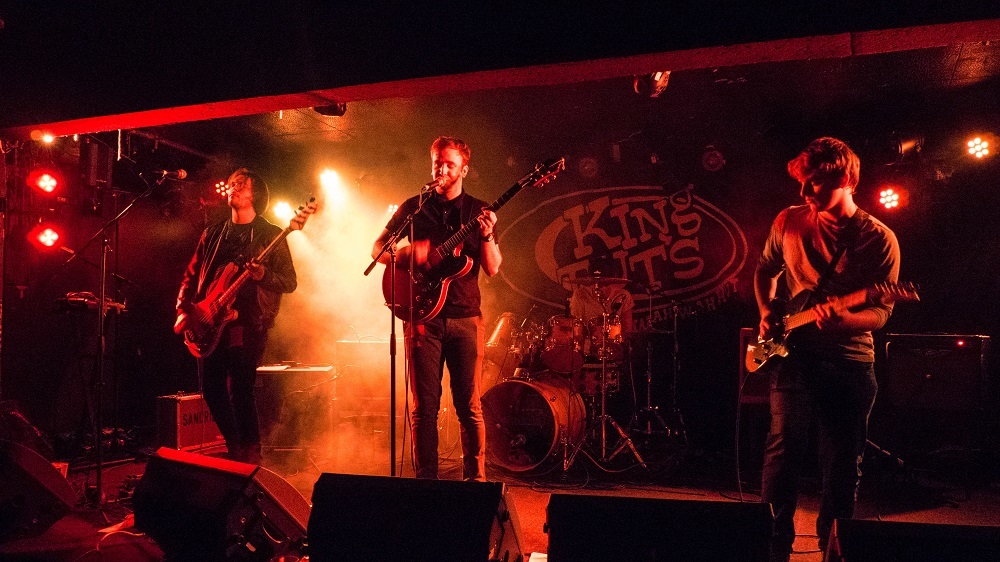 Tell us about your new single ‘Bring On The Rain’. What’s it about?
Basically it means instead of fearing the hard times you should embrace them and face them full on. In other words, “bring on the rain” is sometimes what needs to be done if you want to get the best out of life and, ultimately, not to let troubles you face hold you back or stop you doing what you want to do.

How did the song come together?
As with the majority of our songs, Stephen came into a rehearsal with lyrics and chords for us. After playing it a few times, we all worked out and added our parts on top, until we had a song that could be performed (after rehearsing obviously!). We quickly decided the track would be our next single and booked in studio time with Edinburgh producer Mark Morrow. It was there that final touches like additional harmonies and delayed guitar parts were put in as well.

How does the single build on your previous releases?
Since our last single, we have returned to King Tut’s 3 times, we’ve played our first festival and we’ve started to move around the country. This single is probably simpler than any of the others but with good affect, I feel. It’s catchier but not too ‘commercial’ or ‘mainstream’ by any means, it still has its indie roots. It’s easier on the ear compared to previous releases

What’s your hopes for ‘Bring On The Rain’?
We hope the single will be able to reach a newer area of audience than we’ve got to before, and that it will give us opportunities to play in new regions. The dream is to head down into England for a few shows in the coming year.

When and where can we expect to see you on tour next?
We’re going to be ending the year on a fairly quiet note. We’re planning out 2018 right now, but we’ll be sure to be playing as much as possible in as many places as we can!

If you could collaborate with any living artist, who would it be?
Stephen – Peter Hook.

Finally, if you could go back in time and give yourself one piece of advice, when would it be and what would you say?
Don’t try to be something that other people are already doing; stick to what you enjoy doing and do that as best as you can. That’s how you get people’s attention.