Heyme Langbroek - or simply Heyme as he likes to be known - is originally from Holland, then spent 16 years in Belgium playing in different bands and moved to Poland 6 years ago. His debut solo album Noise from the Attic is due out in January on which all instruments on all songs are played by Heyme using a loop station to create a basic track, then weaving further rhythm and melodies into tapestries of sound. We spoke to Heyme about his influences, debut album and creative process.

I don’t pre-write, and have really no idea set when I start recording, stuff just comes out while I’m doing it.

First up, tell us bit about yourself - what first got you into music?
In primary school (the last year, when I was 12), the local harmony orchestra Crescendo was looking for little souls to join their band. They offered an instrument, and I thought it’d be cool. I wanted to pick the saxophone, but then you had to do a year of flute first, definitely uncool, but trumpet was ok from day one. So trumpet it was, music school on Wednesdays, and the harmony on Thursday evenings.

I had a really cool Trumpet teacher, who came to see a Kiss My Jazz concert when we were around 12 years later. I also joined the high school big band, more jazzy, which I still think is cool, playing things like ‘Moonlight Serenade’ and The Pink Panther theme. Still like big bands - Glenn Miller like stuff.

Were there any particular bands or artists you took inspiration from?
I’m sure I did. Everything I listened to. I like pop-songs with good lyrics and melodies: Elvis Costello, Elvis, Johnny Cash, Beatles.

I owe lots to Rudy Trouvé in regards to the mixing of all styles, lo-fi noise, and pop. And the fact that sounds are everywhere. I was quite fond of the glam-rock in the 80’s - Lou Reed, David Bowie, Roxy Music.

Mostly I admire bits, like the starting trumpet in ‘Funkin’ for Jamaica’, or the sax in Bryan Ferry’s version of ‘Let’s Stick Together’ (single note only, and instantly recognizable, pretty jealous in a good way of that). Nowadays listening to the minimalists a lot, Olafur Arnalds, Brian Eno, Nils Frahm.

How would you describe your style?
I try to avoid that to be honest, never could. Minimalist art wank pop with big-band and noise-rock influences?

Why just ‘Heyme’?
It is my name, and quite uncommon even in Holland, so pretty unique. And hey, it’s me.

If you could collaborate with any living artist, who would it be?
Brian Eno, Nick Cave or Tom Waits. 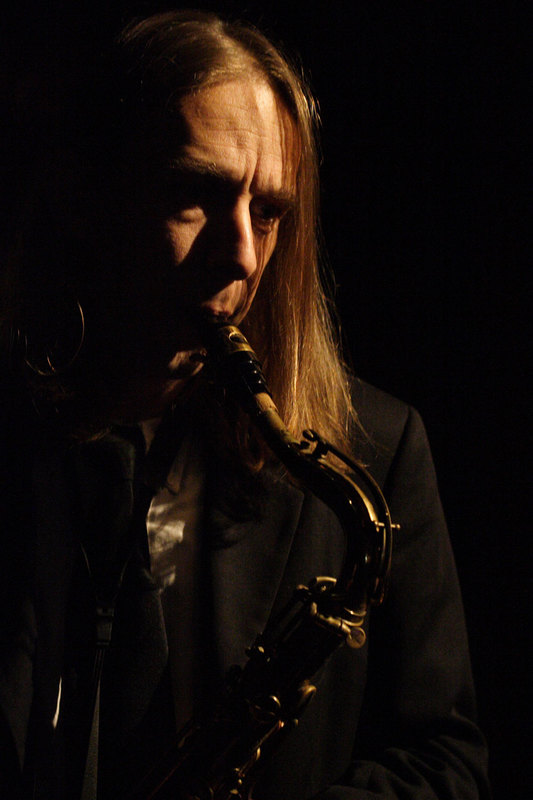 You’ve played in bands such as Kiss My Jazz, Lionell Horrowitz & His Combo and IH8 Camera. What did you learn from those experiences?
Kiss My Jazz was improvising a lot, we started out improvising 100 percent, and then some patterns would appear and return, finally becoming songs. IH8 Camera is still 100 percent improvisation.

Creating something on the spot was an absolute kick. Finding out the audience also enjoyed this was a big surprise. Now I still think the creating stuff part out of nothing is the best part of making music. Noise is also part of music, as is silence. Music is a mood.

How have they influenced you as a solo artist?
I still like to create out of thin air. I improvise on the spot when writing and recording. I honestly have no idea when starting out to record, or maybe just have a riff in my head when I start recording. I just start playing, play it back and instantly record something on top. If it is cool I keep it, if not I go and do something else.

Tell us about your debut album Noise from the Attic - what’s it about?
Never really thought about that. I like themed albums though, Ziggy Stardust, Lou Reed’s Berlin, The Wall. Not sure if there’s any theme in the record, though I tend to like minor chords and atmosphere, creating a slight feeling of nostalgia, sadness, loss, the search and failing to find beauty.

When did you write it and where did you record it?
All my songs on the album were recorded over the last year-and-a-half. The two covers are older (my four-track version of Kiss My Jazz’s ‘Burn In Hell’ is from 1997, and Mutsi-Mutsi I recorded years back, more than five, but less than 10, I think).

They were all recorded on my Attic, where I have one room of 2.2 metres by 4 metres, where I go and record on Sundays mostly. All songs were written while recording them, there were two that needed more than a day to finish.

I don’t pre-write, and have really no idea set when I start recording, stuff just comes out while I’m doing it. 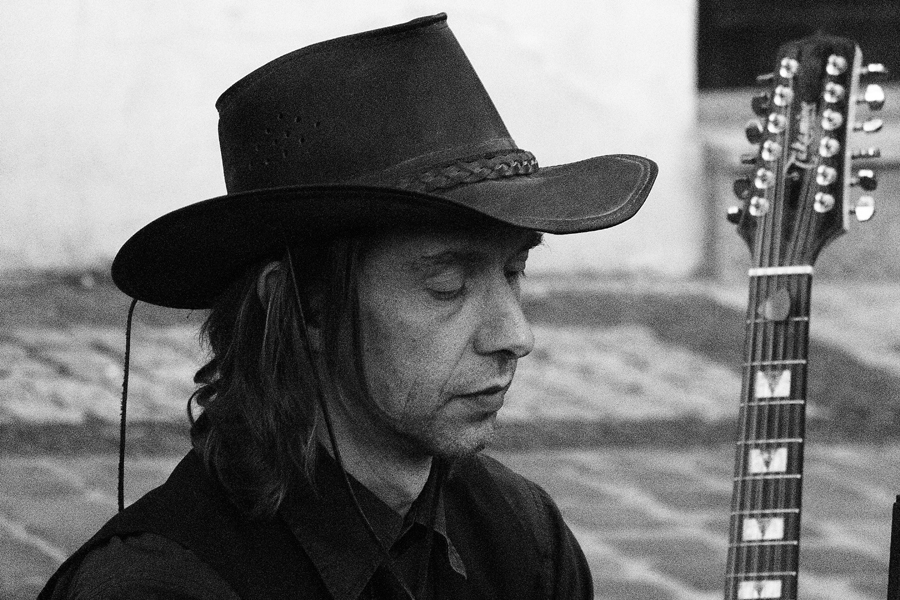 Can you talk us through each song on Noise from the Attic?
It is funny how the songs do get meaning after finishing, even though I never set out with something like that in the start. Titles reflect the meaning I attach to them.

‘A Day in Life’ - The starting song is sort-of a full day captured, starting a bit wobbly and hesitating, then gets loud and noisy (traffic? work?). I was hoping to capture some repetitiveness and boredom of daily life.

‘Paranoid’ - Sort of a reaction on the idea of having your head fucked with by the Facebooks and Googles of this world, influencing people’s decisions without realising that. Also a bit about having conversations and arguments in my head that I of course always win in my head, but never play out in real life. Frustration.

‘Hard Times’ - Daily struggles, exhaustion, being overwhelmed, just going through the motions and hope to survive another day.

‘All Time Favourite’ - About how there is something or someone that is your absolute number one, but can be something or someone else next day. Bit like the pop-charts maybe? Possibly my favourite song on the album by the way, not sure if that will still be the case next year.

‘Noisz’ - Exactly what it says. Just started banging on the piano, low-repetitive noise, build up layers. Had good fun just banging it out. Think it took me less that 2 hours to wrap this one up.

‘Where She Goes’ - About letting go. And being grateful for the time you had, even though you’re sad to having to end this.

‘Mutsi-Mutsi’ - Translated it is a man singing to his mum to light a candle as his life will end and she’ll have to watch his body being lowered into the ground. Loss, sadness, but also acceptance of how it is and will be. Fitted really well on the record I thought, very happy and grateful that Tuomari Nurmio gave permission to release it.

Actually I thought it was a really old Finnish folk-song not belonging to anybody when I learned the song 25 years back, only found out when planning the release half a year back that it was not common Finnish property.

‘Klara’ - Also a two-to-three-hour affair to record without any previous plan. Klara was our adopted Golden Retriever, she was really sweet, always sort of tired, and liked nothing better than lying in the full sun.

She reminded me of Pluto a lot, none too smart, but really trusting everyone, even though she was horribly handled in her younger years. She was just used to create young pups in a puppy mill until she was totally worn out, then thrown out, ending up in a shelter, from where we adopted. She finally died peacefully after spending three years with us. I was trying to capture her good spirit with this song.

What are your hopes for Noise from the Attic?
That some people like it, I just wanted to create, and get my things ‘out there’. My very biggest hope is that this record will be appreciated in the same sort of way by someone.

I always loved to buy records, hold the cover, read the back-notes, and play the music. My favourite covers were pinned to my wall as art pieces (which they are), I just loved handling them. I’m really, really grateful for Rudy’s cover art for the album, as already for me myself it is a very special record.

If anybody else is also happy with it it will be a bonus, Poland where I live now is not really the country that will embrace my style, I think it will suit Belgium and Holland better, and expect the old Kiss My Jazz fans will like it quite a lot.

What’s coming up for you in 2019?
My next album. I’m creating for the sake of creation, not for big fame or live concerts. I just love the creating part.

I can play the record largely live, but have to build up the songs with a loop station, so it will not be very rock & roll, more a slow build up. Very suitable for houseroom concerts, background music with art exhibitions, and some smaller venues, not really a fan of bringing music live song by song and have people clap (or boo) in between, I would just like to integrate and bring one long piece flowing over in the next, without expectations.

Finally, if you could go back in time and give yourself one piece of advice, when would it be and what would you say?
All the way back to sperm please, tell it not to bother the egg, not worth all the fuzz.

Check out Heyme’s ‘Where She Goes’ on YouTube below. For news and tour dates, visit Heyme’s Facebook page.