Easymess is the French-born, London-based multi-instrumentalist Adrien Latgé. After years of providing drums and backing vocals for other artists, Adrien embarked on his solo project in 2015 writing introspective folk with brief moments of angst. We caught up with Adrien on the release of ‘Out of Sight’ to learn more about his music.

I came [to London] on my own, not knowing anyone, and slowly this whole group of people who became, my friends, my bands, made me stay without even realising it.

First up, tell us a bit about yourself - what first got you into music?
If I go far back, I thing the first picture I’ve seen of myself (nearly) playing was hitting pans that I had carefully displayed on the kitchen floor when I was three. Then mmy parents supported me into drumming and percussions and convinced me that actual instruments sounded better than their pans. Learned drums, percussions and xylophone from there, and eventually picked up a guitar when I wanted to start writing songs at about 13.

Were there any particular bands or artists you took inspiration from?
In music in general and drumming, my first influences were always World music. I grew up listening to a Youssou N’Dour album literally every day of my life, and Brazilian music. Then when I started writing, my influence switched to what I aspire to create now.

Damien Rice had always been my main reference, for the honesty and transparent delivery. He is still my favorite artist to date.

Why the name ‘Easymess’?
I wanted to change my name because people don’t write it correctly when they hear it, or don’t say it right when they read it. I thought I’d make it easier for everyone! ‘Easymess’ came out of a tipsy brainstorming of words that I used a lot in my songs, and then made combinations that we thought sounded good. (Could have been much worse, trust me).

That one worked out well because I think it does represent the paradox of my music, where sad and happy and melancholic feeling are all mixed up together.

How would you describe your style?
I tend to call it “violin folk” when I have to introduce it to someone who’s never heard it. My first EP didn’t have any violin so I was really torn on how to call it, but Mónica (the violin player of the band) sorted me out and helped me create this made-up genre.

Eventually, I’d just describe it as introspective, emotional folk, but it’s getting louder and rockier, might have to change my label with what’s to come.

If you could collaborate with any living artist, who would it be?
There’s quite a few actually, but I feel like I’d like to have something French in my music at one point as I always write in English, and I’m in love with the French hip hop scene. So I would say Gaël Faye, he’s a rapper, and a writer, and probably lyrically the best poet in the French rap scene in my opinion, and he works a lot with really acoustic sounding production, I think that would be something I’d love to try on one of my mellow songs. 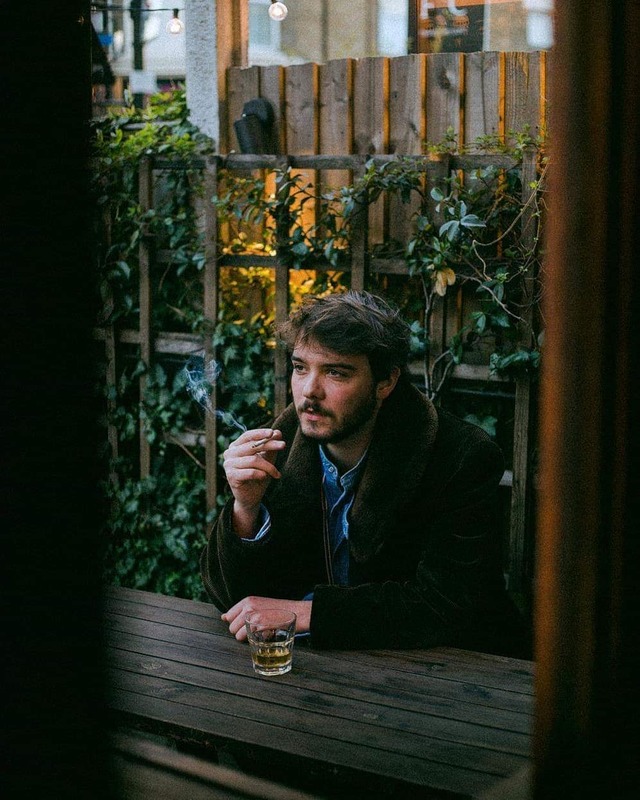 Tell us about your latest single ‘Out of Sight’. What’s it about?
It’s about London really, and deciding if I wanted to stay here after a year. I came here on my own, not knowing anyone, and slowly this whole group of people who became, my friends, my bands, made me stay without even realising it. There was more that I wanted to learn, more music to make, more stories to share, so I stayed.

When did you write it and where did you record it?
I wrote it after my 1st year in London. I came home in France for 4 months and was trying to figure out a plan, weighing the pros and cons of living in London. That’s when the song came out.

Eventually remembered that I liked it last year and finished it, so we recorded it this year at Mattison Studio (North London). It’s a great studio set up by my friend Julien Baraness who tracked the song. Then I had it mixed by Ali Robertson from Lewisburg.

How does ‘Out of Sight’ build on your previous releases?
I have released 2 EPs before this single. “Out of Sight” feels more like a new start than anything else. The previous EP “One Night Stand” was sort of a one-off as it was a concept EP and all the songs were written and recorded in 12 hours. The theme is recurrent in my music though, and it feels like a continuity to talk about London this way, but I feel like this single sets a new, more adventurous and developed sound to my music.

What are your hopes for ‘Out of Sight’?
I’m really proud of it, so ideally all I really want is for it to get more attention, and get these streams up a little bit. We’re trying to make the most out of it, there will be a music video coming for it soon, and a live session. Then I want to keep playing it live and get it stuck in people’s head as much as I can. It’s quite a happy upbeat song in the end, so I hope it’s in people’s spring playlists, ready for when it comes !

Can we expect more music from you later this year?
Definitely. Along with the single, we recorded 3 other tracks. So there will be another single coming out this spring, followed by the full EP for the summer. You will know more very very soon.

Any forthcoming tour dates?
I’m always playing here and there in London, but nothing big planned for this next month. There will be a release show for the 2nd single though, so that will be announced along with the release date.

Finally, if you could wish for one thing to happen for you this year, what would it be?
A Brexit cancellation? For music, I’d just like to get to play bigger shows with the full band, a good feedback on the EP, and hopefully more collaborations and side projects. Summer is a brilliant time for this, so I hope I’ll have some new side projects to introduce next winter!

Listen to ‘Out of Sight’ on SoundCloud below. For news and tour dates go to easymess.weebly.com.