Indie-electro artist DYVR released his ambient new single ‘Rising’ last month, part of his latest EP. We caught up with him to find out more.

‘Rising’ is part of an EP called Part Two – it’s a kind of love letter to the queer scene in London that made me feel so safe when I was struggling with my sexuality.

First up, tell us bit about yourself - what first got you into music?
I guess I’ve always been into making music. I started taking it more seriously a few years back but really I’ve been in a musical place since I was a kid – when you do something enough times I think you naturally begin to feel more connected to it. That totally happened with me.

Were there any particular bands or artists you took inspiration from?
Yeah early on I was listening to bands like Mogwai, Radiohead and Sigur Ros. When I was growing up I listened to a lot of hip hop – I found my way to more spatial and electronic music through that, but I retained this love of lyrics so hip hop still has a big place in my heart. These days I listen to everything!

How would you describe your musical style?
I think of it as ambient and cinematic – but mainly it’s really personal. I suppose it would be weird if I didn’t think it was personal though!

Why ‘DYVR’?
It’s a little abstract really. I woke up one morning with the letters in my mind; I must have dreamt them… I had a big whiteboard in my room at the time and I wrote the letters really big on it and just left them there for a while. Over time this feeling of being submerged in water became really connected to the music and it just stuck.

If you could collaborate with any living artist, who would it be?
I’ve been asked this a lot recently and it’s getting no easier to answer! Can I give you a shortlist?

There are so many more, but I think we’d be here a while if I kept going. 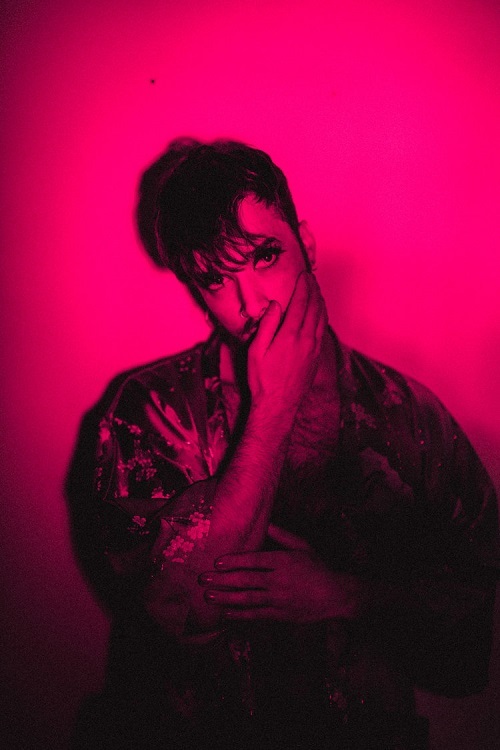 Tell us about your latest single, ‘Rising’. What’s it about, what are its themes?
‘Rising’ is part of an EP called Part Two – it’s a kind of love letter to the queer scene in London that made me feel so safe when I was struggling with my sexuality – it’s about a loving community that has lived in the dark for a long time, and that is stepping out into the light. It’s a little overwhelming, but ultimately a beautiful thing.

When did you write it and where did you record it?
‘Rising’ existed as a demo for a little over a year. I knew I wanted it to be on the record but I also knew it was going to need a fair bit of work. I recorded with my amazing producer Matt Harris in Sussex. All the songs on the record were recorded down there – it was such a peacefully and scenic place for the songs to come to life.

How does ‘Rising’ represent your style?
It’s a real nod to my roots you know? I grew up with a lot of hip hop and I was listening to a lot of Mos Def, Pudgee and Ghost Face when I made the beat. Matt really injected a lot of energy into the track in the studio and brought it more to the ‘DYVR’ space with wider sounding synthesisers and he slowed it down a lot. There’s a lot in this track that is made up of the past and the present – I think that is becoming important for me.

What are your hopes for ‘Rising’?
I’m really excited for ‘Rising’ to be starting the next chapter. I would love for it to become the mascot for the record you know? For me, it’s like that moment in a club when the music takes over and the strobe lights hit and everything feels possible. I hope it feels that way to everyone.

‘Rising’ is taken from your forthcoming EP Part Two. Can you tell us a bit more about that?
Part Two is a record that deals a lot with individuality – especially within the queer community. Finding your own identity inside a community that was formed in the dark can be difficult. As we progress, the call for autonomy is becoming all the more apparent. It’s a great thing, but it also presents challenges that are fairly new. This EP is for anyone who is reaching for their own truth.

What can you tell us about your plans for the rest of 2019?
We will be releasing each track from the record and playing a bunch of live dates later in the year. I‘ll also be starting work on a new record soon but there is a lot to do before then!

Finally, if you could go back in time and give yourself one piece of advice, when would it be and what would you say?
Ooooh a tough question! I think I would say to not get so caught up in the details all the time – decide on a goal, then work towards it moment by moment. And for fuck sake ENJOY those moments! Be the most honest version of yourself that you can be and everything else will come naturally.

If we’re talking to 16 year old me I would also say to stop wearing trilby hats and waistcoats – it’s a bad look for you. Ha!

Listen to ‘Rising’ on SoundCloud below. For news and tour dates go to DYVR’s Facebook page.