Cut Capers is a Bristol nine-piece band blending swing, hip hop and everything in between. Their new album, Metropolis is released on Friday (May 10th) following on from singles ‘I Know’ and ‘Alright’. We spoke to the band about their history, influences and forthcoming LP.

We’re now a gang of nine channeling our own take on swing, hip hop and groove music.

First up, tell us bit about yourselves - who are Cut Capers, and what were you doing before making music together?
Nick: We formed in Bristol around seven years ago, when me and Mark - who are friends from school - realised we wanted to expand our instrumental hip hop sound to incorporate more live sounds and a lot more people! We met Eloy our Spanish emcee who had recently moved from Galizia in Spain, and immediately started making music together. We couldn’t even have a proper conversation at that point as he hardly spoke any English, but could communicate through music and jam together, which is amazing to look back on!

We knew we had something and wanted to thicken the sound. We met Tom our big baritone sax who had relocated from Essex and really beefed-out the brass section. He was 16 and lied about his age! Jane and I had been playing together in pubs and her joining really added a whole melodic dimension which unlocked all these new song-writing posibilities.

We’re now a gang of nine - with a full four-piece brass section of Mr Long on trombone and mighty Elliot on trumpet - channeling our own take on swing, hip hop and groove music. We have different backgrounds but share the same musical vision and raw enjoyment of this sound we’ve built!

Who did you take inspiration from?
Cat Empire are a big reference point for us. Mashing styles together is so exciting, those elements of Latin, ska, hip hop and reggae go together so well. Caravan Palace would have to be another influence, but to be honest it’s the original swing guys like Benny Goodman and Glenn Miller that we’re riffing off with our swing arrangements.

We also listen to legends like Nas, and UK hip hop like High Focus. Leanne La Havas, Anderson .Paak… the range of sounds we get to hear at festivals is huge and inspiring so we probably take from everything!

Why the name ‘Cut Capers’? What do you stand for?
‘Cutting Capers’ means to have a great time and generally enjoy oneself! We are really attracted to the vitality that music generates and the community feeling of connecting that you feel with a crowd of people. That inclusive, involving, interesting life energy is something we channel.

How would you describe your musical style?
We have roots in hip hop but the breakthrough came when we introduced swing and funk grooves and melodies into our sound. We love exploring the connections between styles, and finding the common ground where things gel to create something new. Coming from Bristol we are influenced by the rich melting pot of cultures and sounds around us. “Swing hip hop” is the nearest phrase probably!

If you could collaborate with any living artist, who would you love to work with?
Tom: Quincy Jones… or a big band, imagining some of our tunes with a big band behind them would be amazing. 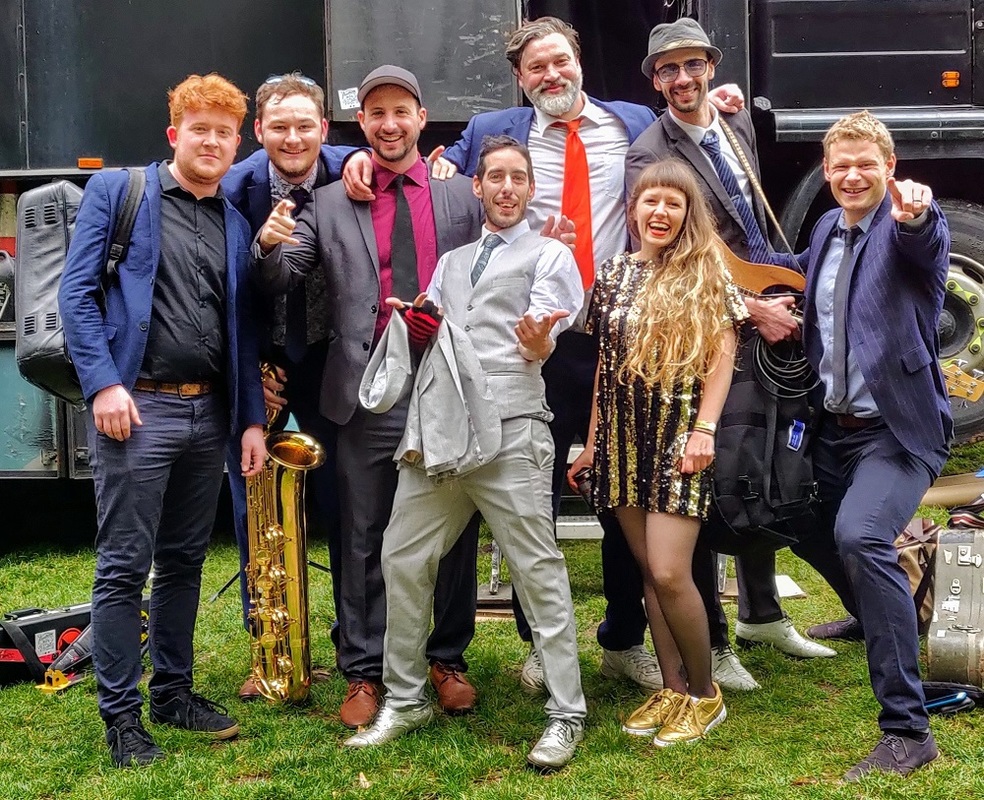 Your new album is Metropolis. When did you write it and where did you record it?
Tom: We wrote the material over the past 3 years and recorded at Monnow Valley Studios in Monmouth with our wonderful producer Tom Manning. He really pushed us to expand on our sound in cool new ways. We keep our ears open during the recording process and were able to unlock some extra levels when we were in the studio, which we’re excited to show everyone!

How does ‘Metropolis’ build on your style?
Tom: It feels like a big step forward in terms of the writing style. Writing and arranging together as a group has built a more cohesive product and has been hugely rewarding! We have been able to take our favourite aspects of music and run with them, for a deeper, richer sound. We’re still the same bunch of friends living in Bristol, but we’ve focussed ourselves in a way we’re really happy with.

Can you talk us through each track?
Yes…

‘Get Movin’. Jane’s lyrics really capture the feeling we were all looking for in a big Swinging grooving opener. A tribute to the masters of swing, and our lives living and playing together in Bristol!

‘Large Tortoise’. We wanted a big heavy brassy riff to kick in that literally feels like a big plodding beast, we were really happy with the sort of Brooklyn street brass feel of how this came out.

‘Wait Just A Minute’. This relates to that feeling when you’re at your desk clock-watching, waiting for the evening, the weekend, a G&T, whatever is your anodyne! Whatever your worries, take a minute for yourself and just enjoy it!

‘I Know’. This is about freedom to choose and be yourself.

‘El Viaje’. Eloy: Meaning quite literally ‘The Journey’, this is a very positive song about life in general I’d say.

‘Let’s Start Again’. This is about dancing with someone in a busy room, and feeling like you are the only two people in the room. Everything else shuts off and you’re both just in the moment, you never want it to end, and want to do it all over again.

‘Elephant’. This one is just crazy. We wanted to capture the sound of a million elephants stampeding everywhere!

‘Alright’. We’ve all had moments where we feel like we’re drowning, but ultimately you can always take a step back and take control. It’s alright in the end!

‘Feet Off The Ground’. When we toured in Venice we were so blown away by the look of the place, we created this track to homage the story of the place, the colours, the light, the dark, what a place!

‘One More Drink’. You sometimes go out for a quiet beverage, then end up naked with a cone on your head…

You’ve released two singles from the album - ‘I Know’ and ‘Alright’. What kind of response did they get?
So far so great! Lots of really cool positive feedback on it so far, it’s so nice to be releasing new music after working on it for so long. The geeky Spotify numbers are all going up and we’re happy!

What are your hopes for Metropolis?
We hope it can be heard and appreciated by as many people as possible! If it brings people together and acts as a platform for us to play in places we’ve never been to and travel the world then fantastic! Obviously world domination is the ultimate goal!

What are your other plans for 2019, can we catch you on tour?
Our album launch is at SWX in Bristol, on Friday, May 10th. Then we’re playing 20 or so shows across the summer including trips to Belgium, France and Italy. We can’t wait! We’ll also be playing at Glastonbury festival and Boomtown which we’re super excited for!

Finally, if you could go back in time and give yourselves one piece of advice, when would it be and what would you say?
Be true to the music you love, keep the faith, and go to Monnow Valley studio at the earliest opportunity you can! It’s amazing.

Listen to ‘I Know’ on YouTube below. Cut Capers launch Metropolis at SWX in Bristol on Friday, May 10th. For news and tour dates go to cutcapers.com; stream the album on Spotify.