Brudini has emerged from Soho’s bohemian arts scene. He’s collaborated with Lulu Gainsbourg and Lanah Pillay, co-starred a sold out Soho underground alt-cabaret featuring Erasure’s Andy Bell and performed at the Tate Britain. His most recent single was ‘Reflections’ taken from his debut album From Darkness, Light to be released later this year. We caught up with Brudini to find out more about his music.

I want my music to sound original and fresh, and have no ambition of being a museum.

First up, tell us a bit about yourself - what first got you into music?
Music was a winded journey for me. I started playing piano at age 6 or 7 like many kids do, my parents pushed me into it. I quit at age 10 or 11. I never enjoyed learning the sheet music, but I could sit and improvise for hours. In my teenage years I was a vocalist in a couple bands, and eventually learned to play the guitar in my early twenties. Then I started producing my own stuff and with that came the passion for analogue synths and anything that makes weird sounds.

Were there any particular bands or artists you took inspiration from?
My references are pretty eclectic. I love classical music - Chopin, Debussy, Grieg. For songwriters I am very fascinated by singers like Jacques Brel, Scott Walker, Carlos Bardel (the guy with that tango tune from Scent of a Woman), even stuff like Frank Sinatra. So masculine and firm in their delivery, yet still conveying so much emotion.

Otherwise I love CAN, and this Norwegian 60’s experimental jazz band called Min Bul, Melody Nelson-era Gainsbourg and the work of his long term collaboration partner Jean Claude Vannier. I love poetry, but more of the older school. I love the beats for its rawness and its connection to jazz. All in all my influences are mostly older stuff! I guess I often find it more inspiring to trace ideas back towards their roots, and then build something new from there.

Why ‘Brudini’?
You know, I tried to come up with all these hip, abstract band names. But in the end I figured that what I really wanted was for my artist name to resemble that of a persona and have real character. So in the end I took my own last name and gave it an Italian twist, to give it a tint of grandeur and that feeling of warm, fading sunlight you can experience in evenings.

Brudini becomes a construct of some facets of my persona; the dreamer, the eternal underdog, the twisted entertainer. It sounds a bit like Houdini. Or Arturo Bandini, the name of the protagonist in John Fante’s beautiful novels about a struggling writer in 1920s LA.

How would you describe your style?
Dynamic, expressive, soulful and not restricted by genre. My recordings are all pretty analogue - jazz drums, bass, condenser microphones on creaky old pianos, analogue synths through tape delays. Gives the music a bit of a nostalgic fabric perhaps, but if so, that’s just a bi-product. This is the 21st century after all, I want my music to sound original and fresh, and have no ambition of being a museum.

If you could collaborate with any living artist, who would it be?
I would love for Jean Claude Vannier to write string arrangements for some of my new material. He’d probably be pissed off though, he’s a composer and musician in every aspect and supposedly hates to be labeled as just a ‘string arranger’!

I have a couple other collaborations already ongoing though: Californian beatnik writer Chip Martin has contributed 5 sonnets to my album, Hungarian artist Gaspar Risko and I are planning an art installation/musical performance in Budapest, in London I’ve worked with gender fluid butoh artiste Thierry Alexandre and LGBTQ-pioneer Lanah P, and I am looking to do a collaboration with Turkish contemporary composer Umit Armagan. 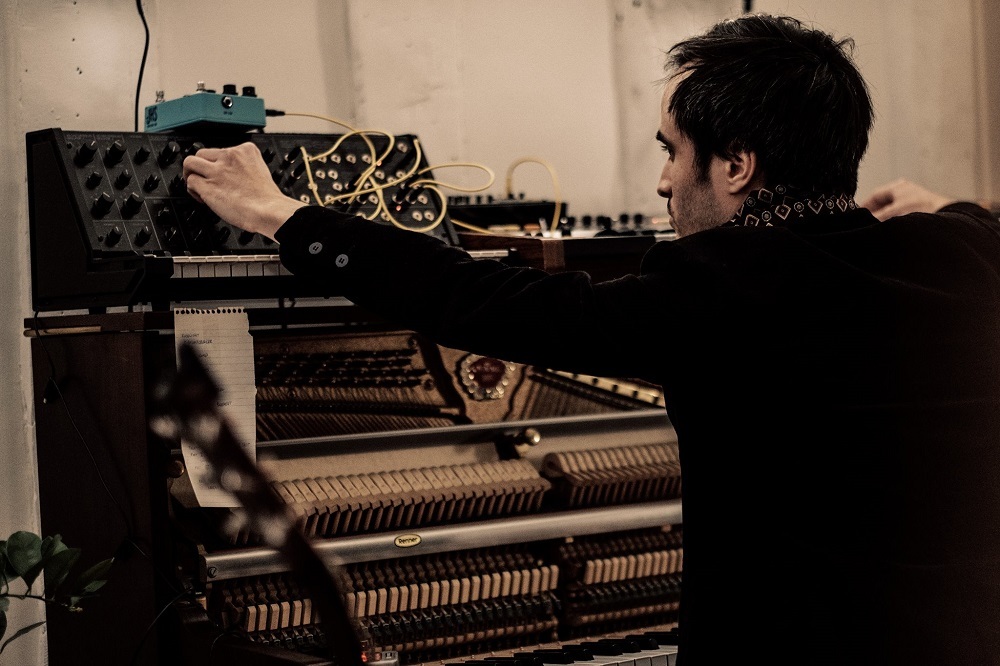 Tell us about your latest single ‘ Reflections’. What’s it about?
‘Reflections’ is that surreal disconnect you’re experiencing within yourself, when you’ve lost a bit track of who you are. Sartre has this passage in his book Nausea where the main character stares into the mirror, but the only thing he can see reflecting back at him is this ambiguous grey mass with eyes in it, while he ponders the passage of time. The feeling I am trying to capture in the song is a bit similar. However, next to the subjective narrative, the song has a more current narrative too.

With the beautiful machine, I can’t help but thinking of how our ideals about liberal democracy are on a weakening foot in so many countries, and the resurgence of populism and nationalism. Darkness and desperation is at the core of both narratives. The idea behind the artwork for the single was to link the two. It’s a beautiful, yet obsolete structure in an abandoned house. In Hungary.

When did you write it and where did you record it?
I started writing the song back in 2015. Over the next years I performed a lot of live shows, and over this period I kept coming back to the song, changing things, adding things, re-recording things. My vocals changed quite a bit over these years too. The track was recorded in a shed in East-London, and at my home in Dalston.

I had it mixed at Sear Sound in NYC with my friend Jeremy Loucas, in what used to be John Lennon’s old studio. The tape machine we used for mastering actually belonged to him. Quite an experience of itself..

How does ‘Reflections’ build on your previous releases?
My previous release was a 7” back in 2017. ‘The Nightcrawler’ which was the A-side will feature on the forthcoming album, but in a slightly different form.

What are your hopes for ‘Reflections’?
I am self-releasing Reflections and my PR keeps telling me my hopes are too high! Obviously I want it to reach out so people get to hear it, and ideally, feel something when they do. I hope it gradually builds some awareness of my existence, and a bit of anticipation for what comes next.

‘Reflections’ is taken from your forthcoming concept album From Darkness, Light. What’s the idea driving the album?
From Darkness, Light is an abstract, existentialist journey. Almost like a grief process, but for the soul. It starts with a sense of a loss, then moves on through sadness and desperation, self-questioning and abandoning of old ideals, there is lust and rage, then a moment of true mourning which finally leads to some form of cosmic consolation - the feeling of coming out on the other side.

The album ends with the protagonist wandering into the open promise of a new day.

How does ‘Reflections’ fit in?
‘Reflections’ is in the first half of the album. It’s tense and desperate, still with the feeling that things are getting darker. There is a growing torment, a self-questioning and feeling of sadness and unease, but the causation and full extent of it has yet to be revealed.

Finally, if you could wish for one thing to happen for you this year, what would it be?
I hope the album release enables me to play a lot of shows and meet a lot of wonderful people.

Listen to ‘Reflections’ on SoundCloud below. For news and tour dates go to brudini.com.