Frankfurt-born DJ and producer Anthony Rother will play Love Family Park on Saturday, July 2nd in what will be a homecoming gig. The last time he played the techno festival was his debut appearance in 2005, but before then he used to attend the one-day dance music fesival to hear the latest underground techno. This year he brings his new concept Studiophysik to the party - producing a unique live set for every performance. He’s also made an exclusive mixtape which will be given out to the first 10,000 people at Love Family Park this year. We caught up with Rother to find out more about his beginnings, Studiophysik and relationship with Love Family Park.

From early on it was clear to me that I wanted to use digital technology and use the advanced features of this technology wanted to find my personal concept of DJing.

Tell us bit about yourself - what were you doing before getting heavily involved in the music industry?
When I was 11 years old I got a Casio synthesiser keyboard with calculator function, as I started to play more, I got the strong feeling that I wanted to be a musician. From that day on I followed a invisible path towards today - I am now an independent artist, and a part of the professional music industry.

What was the first style or genre of music you really got into? Was their a particular song or artist who inspired you?
I used to listen to classic electro and pop music in the 80s. Since 1984 when I was a young kid I was listening to Kraftwerk’s Computerwelt. Back than I did not realize that this was synthetic music - all I knew was that I really loved the sound of their music and they became one of my mentors. The same with John Carpenter and Allen Howard - when I first heard the soundtrack to John Carpenter’s Halloween I felt in love with their music. Howard/Carpenter and Kraftwerk are the main artists who inspired me as an artist.

How did you learn to DJ? Any famous teachers?
I’ve learned to DJ in the clubs. My career started as music producer and I used to play live with a big setup of synthesisers. In 2007 I wanted to extend my artistic experience so this is when I started to DJ. From early on it was clear to me that I wanted to use digital technology and use the advanced features of this technology wanted to find my personal concept of DJing. In the beginning I was criticised by other artists for talking in interviews about the pitch with digital technology because they wanted to keep this as a secret. For me this was never a topic. As a DJ I was looking for my deeper artistic aspect when I DJ, and this is the music I play.

What’s the first club you played in?
My first live show was in the Ultraschall in Munich. My first DJ gig was a self organised party in a small club here in Frankfurt.

Love Family Park has been running for 21 years. What was your first experience with the festival?
I have previously attended the Parks many times over the past 21 years and I have seen the LFP grow and evolve over these years. My memories of the Parks at the end of the nineties are very intense because techno was really underground and special. Every Park got his own very individual story to remember :)

Most of my time goes now into creative work in the studio because every weekend I play my music in the clubs.

How has the festival developed since?
The transition of the festival has expanded to a wide range in all kinds of ways. I think the real change is the concept of the floors. In the beginning it was one floor, today it is a festival with many different musical interests.

Can you remember your first set there? Tell us about it.
My first and only set has been in 2005 on the main floor. I played live and it was a strong emotional experience because up until that day I had been a visitor of the LFP and suddenly I found myself on stage as performing artist.

This year you’re headlining the Kuddelmuddel stage, what does that mean for you?
The Kuddelmuddel Stage is a Frankfurt thing. It’s a mix of different promoters from Frankfurt. I’ve got into this by Alex Hawn and his “Graf Kauz” crew. I work with them together for my own party “Metrophonia” and this is how I got the chance to play at LFP. I am really excited about this and I am have spent the last month working on tracks for LFP.

What excites you most about this year’s Love Family Park?
First of all it is the fact that I am performing a DJ set after my live gig 12 years ago. The other thing is the collaboration with Cosmopop for my CD that will be giving to the people for free at the festival. The CD features 71 minutes of my newest production in the mix. The tracks are all unreleased and fresh from my studio.

Tell us about your new concept Studiophysik of playing sets only of your own productions and heading back to the studio after every show to ensure your next is different. Why did you feel it important to adopt this approach?
To me this was the logical step because I could not find music for a DJ set at the big digital download stores. Things got more worse over the time because with 5,000 digital releases per week it was impossible to listen to all this releases. Still today it is like this and it’s not fun to search for digital music because there’s way to much. That’s when I said to myself that instead of searching for music I could use this time to produce the music myself for my DJ set. And this is what I am doing today and I am very very happy with it.

How has Studiophysik changed the way your approach your sets, and how have the crowd reacted?
This concept has changed my whole work as artist because I need to produce more music. When you work as a producer it takes more time about marketing and all that crazy and stupid things around it. Most of my time goes now into creative work in the studio because every weekend I play my music in the clubs.

Would you like more artists who play ‘live’ sets to adopt the Studiophysik approach to keep their shows fresh?
Every artist needs to find his own individual way.

When you released your first tune “Sex With The Machines” in 1997 - nearly 20 years ago - did you think you’d be doing what your are now?
Yes. I am following an invisible path.

If you could go back in time and give yourself one piece of advice, when would it be and what would you say?
I guess it would be in 2006 or 2007 and it would be: “Destroy the destroyer”.

Finally, what’s coming up for the rest of 2016?
More exciting times together with my friends in the studio :-))))!

See Anthony Rother play at Love Family Park on Saturday, July 2nd at Messegelände in Mainz. For tickets and details go to lovefamilypark.com. Don’t forget to pick up a mix CD of Rother’s music too. 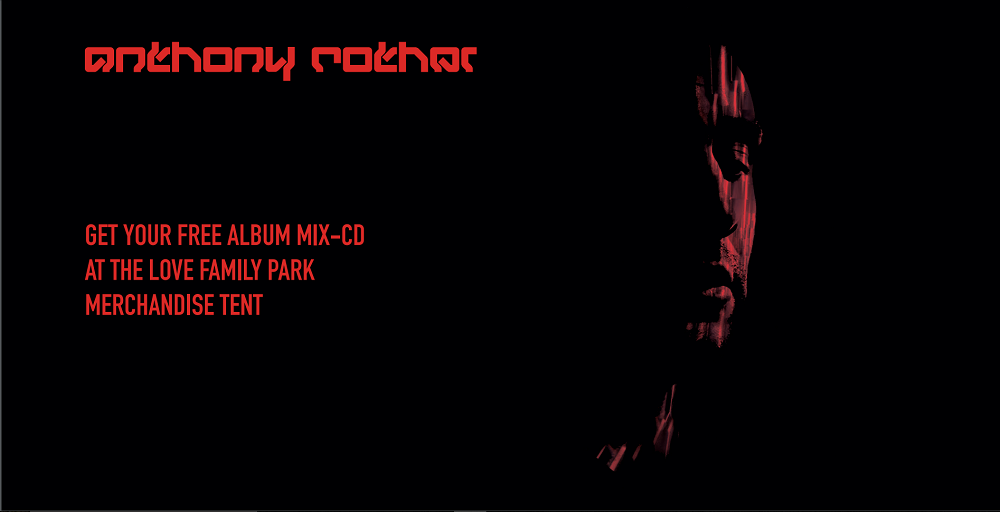