UK-based electronic music producer Alvinos Zavlis writes, records, produces, mixes and masters songs for himself and the artists he develop. His latest single, ‘When I Fall’ sees him work with Waji’s vocals. We caught up wiht Alvinos to chat about the track as well as his influences and most recent album, Time Travels.

‘When I Fall’ represents my more accessible sound which is both club and radio appropriate with vocals and a conventional structure.

First up, tell us about yourself - what got you into music?
At first. I got into electronic music through Djing. I was 16 when I started mixing tunes in my room and I soon felt the need to play my own music, like all of my favorite DJs did. So, I started making music that would fit my sets, house music and techno mostly. After I moved to the UK to study music, I started feeling more comfortable with blending different genres that I loved together in order to find my own sound.

Were there any particular bands or artists you took inspiration from?
Yes, I think we all do and it does show in our music. I take my inspiration mostly from producers, composers and films, therefore if I had to list some of them it would be Pharrell Williams, Kanye West, Zhu, Jonny Greenwood and Vangelis, as well as the films Blade Runner, Under the Skin. The Lobster and The Grand Budapest Hotel. 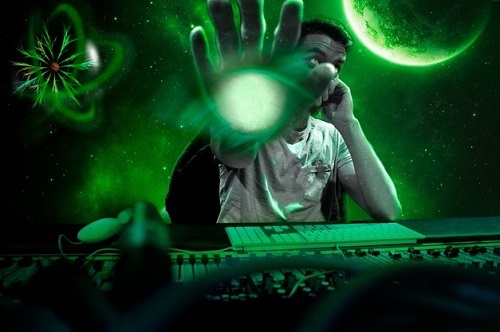 How would you describe your musical style?
I’d say it’s a blend of all my favorite genres. It has hip hop drums that swing, heavy, usually distorted basslines, dark, ambient synths and at times you can catch glimpses of jazz and world music, like in my sophomore album Time Travels.

If you could collaborate with any living artist, who would it be?
Hmm, there’s a lot to be honest! If we are talking singers, then Beyoncé is everyone’s dream! When it comes to producers, definitely Pharrell due to his versatility and wild range; you never know what sound you’ll get with Pharrell, which is something I really admire. And if I can cheat and pick a band as well, then Santana is my all-time favorite!

Tell us about your single ‘When I Fall’. What’s it about?
‘When I Fall’ is song with mixed sentiments for me. If you follow the lyrics it is clearly a song about solitude and loneliness, the way it is delivered by Waji, the featured singer, is haunting, almost sad, and enhances that sentiment.

Although, after the vocals are through, the song takes a turn and becomes a club anthem, with heavy bass and groovy drums. This was a conscious choice in order to show how one can embrace his loneliness and turn it into a positive. The song is still very dark both sonically and harmonically.

When did you write it and where did you record it?
This song came about in a very different way than my other songs. I first received the vocal which Waji recorded in Illinois, US and then produced the song around that. I started working on the song in March, 2020 and produced most of it in my home studio at Kent, UK, with parts of the production and mixing taking place on a bus while traveling to and from my day job.

How does ‘When I Fall’ represent your style?
I’d say if someone who’s never listened to my music before listens to ‘When I Fall’ first, he’ll get about 50% of what my style is about. This song represents my more accessible sound which is both club and radio appropriate with vocals and a conventional structure.

I’d say it’s a great song to be introduced to my music with, it could easily be a part of my debut album ‘We all float …’. If one wants to dig deeper through my catalog, the next step would be my album Time Travels.

How’s the rest of 2020 looking in what’s becoming a crazy year?
It sure has been pretty hectic so far, and the rest of the year is still very busy for me. I have a series of singles planned for the summer, all songs I managed to write during my Covid-19 self-isolation. Right now, I’m finishing up the debut album of Young Smart, an artist that I develop and I am very excited for that one to be released later this summer!

I also scored a short film earlier in 2020 which will be released later this year, keep an eye on my website for that one. Finally, I will soon be moving to Bristol, UK, where I will study for my Master’s degree in Sound Art and hopefully get to work as DJ and produce music for some local talent.

Finally, if you could go back in time and give yourself one piece of advice, when would it be and what would you say?
That’s a great question! I probably would go back to 19-year-old me because that was probably the last time I ever had doubts about pursuing music. My advice would be to never doubt my instincts and to not loose sight of my dreams. Eventually everything will work out like they are supposed to!

Listen to Alvinos Zavlis on Spotigy below. For news, go to musicglue.com/alvinoszavlis