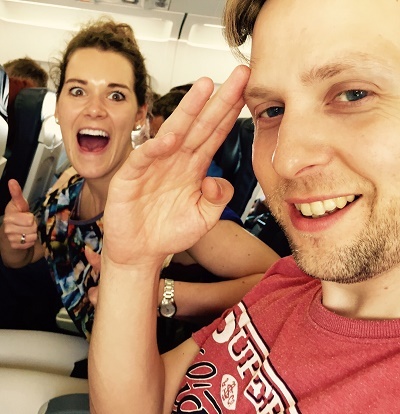 Sónar returned to Barcelona for its 22nd year in the Spanish city, the place where the now global festival of music, creativity and technology began. From Thursday, June 16th to Saturday, June 18th music from the full spectrum of electronic music was heard over three days and two nights supported by Sónar +D, a forward-thinking conference bringing together industry professionals to talk about the future of music technology. Mike Barnard and Ann McManus reflect on their stage-hopping experiences.

Tiga played his back catelogue live - a real treat for fans.

He Said: “The moment the sunrise greets the end of every Sónar as dawn breaks across the outdoor stages in the early hours of Sunday morning is a glorious moment. This year we were enjoying Donna Summer’s “I Feel Love” during Laurent Garnier’s SónarPub set when the realisation the sky had lit up as the festival drew to a close. It had been an epic final night. We walked into Duran Duran’s early set featuring classic 80s hits such as “A View to A Kill”, “Ordinary World” and - of course - “Rio” before a headline show by The Chemical Brothers which introduced tunes from new album Born in Echoes among live favourites “Star Guitar”, “Believe” and “Staturate” with the lesser-heard “Under the Influence”, “Music:Response” and “The Test” surprise additions. The main room SónarClub was packed to its fullest, making for an incredible atmosphere with what felt like every member of the dancefloor locked in to the big beats.

“Two extended rides on the dodgems, epic beats from supergroup Siriusmodeselektor and Drumcode boss Adam Beyer boshing out the techno made for one of my favourite nights at Sónar. But it followed some other defining moments. On Thursday Autechre had returned for their first set since 1996, still playing in the dark with equally murky experimental beats while Hot Chip offered effortlessly warm indie electro pop. Friday brought with it another of Warp’s cutting edge artists, Squarepusher, showcasing his latest interation of drill and bass while Tiga played his back catelogue live - a real treat for fans, especially when he melded “Shoes” with The Proxy’s “Raven” as a closer.

“Away from the music, Sónar’s adoption of cashless bracelets was welcomed, doing away with the need for various coloured paper tokens to pay for everything in favour of a simple scan, and helping us enjoy more time in amongst the festival rather than queuing at bars. You’d think after 22 years Sónar might be becoming all to familiar, yet the dedication to providing a platform for the most leftfield acts, as well as many of the most popular and emerging talents, ensures it is leagues ahead of the vast majority of dance music-centred festivals.”

Sónar was over for another year and I was, once again, leaving teary eyed and spellbound.

She Said: “Determined that this year I would get my fill of arts and culture before getting my head stuck in electronic music for the week, I went for a meander the length of the city, ending up in the former site of Sónar by Day, Centre De Cultura Contemporanea De Barcelona and was hit by a wave of happy memories from my first Sónar(2012). Certainly time to make more! Loading up my cashless bracelet, I found a spot in the sun to watch the last 15 minutes of Innercut, a rising Catalan dj who can be likened to Cashmere Cat and Rustie - the ideal soundtrack to start melting into festival mood, cocktail in hand. The gang showed up as rockier Kindness started – “like a bad Red Hot Chili Peppers tribute in love”, so we headed to the bar and assessed how many different things we could be served by asking for Tropical Rons, which seemed to be a completely different drink everytime. We bounced around the indoor sets, Palms Trax being a highlight and by Hot Chip we had fully warmed up and ready to progress to the full by Day/full by Night Friday.

“Squarepusher was top of our agenda for Friday by Day and intent on our mission to look native by Friday night, we forfeited most of By Day. Playing indoors in a red curtained room, it felt a bit like stepping into a musical simulator driving us through an electric storm. If you have the musical imagination to appreciate Squarepusher that’s good for you, but many people failed to comprehend the beauty and left. I was transfixed by a Steve Aoki lookalike who had perfected a dancing style that worked for this music. Like a man stuck in a glass box that he was trying to smash his way out of with every part of his body while the box was perched on a trailer that was thundering down a rocky mountain, he had The Moves.

“Onto By Night where Paranoid London at SónarCar demonstrated strong potential to smash any club with attitude heavy acid house, but they were sadly let down by the sound system, which seemed mismatched for their raw mixing. Ensuring we would be at the front of Tiga Live, we took in the spectacle of SOPHIE (who surprisingly sits on Jackmaster’s record label Numbers!) playing live with vocals and miming courtesy of “semi-fictitious” QT resulting in Aqua-esque cartoon tunes. Tiga Live was a treat, Tiga being quite a performer too, with a range of props and everyone’s favourite hits. More love-hate ensued with my being lured to see Skrillex, which was pleasure with pain, but a large happy crowd carried me through, along with some classics one can’t help but fist-pump to. Watching Seth Troxler from the podium at the back rounded off the night well, but left nothing notable to report.

“Despite my protestations, I did enjoy our first Saturday By Night set by Duran Duran for the first little, although a dash to catch some of Cashmere Cat provided a good excuse to leave. Cashmere Cat provided the hip-hop edge to a funky house set that had he crowd happily bumping and grinding. Naturally the name on everyone’s lips that night was the Chemical Brothers and there was no chance I would find the crew I’d left at Duran Duran, SónarClub being absolutely packed out. Given how sensational the set was, remarks about Chemical Brothers remained everyone’s opening line for the rest of the trip. It was so mesmerizing I think I’ll live off that buzz and be unable to stop myself beaming goonishly whenever a Chemical Brothers song plays for years.

“Hard as it was for anyone else to follow, Siriusmodeselektor kept the energy going and then zap! bang! favourite Adam Beyer pumped some hard, percussion heavy techno to close the re-invigorated SónarClub. Laurent Garnier had fixed his usual closing slot that works so well in SónarPub, the outdoor space allowing the crowd to absorb and revive as the sun rises and the beloved strung out melodies of the French legend induced those huge smiles with closed eyes and wide stretched arms dance that only a contented house lover can pull off. Sónar was over for another year and I was, once again, leaving teary eyed and spellbound.”