A blast of pure energy was down at The Bridge when DJ Koze closed out his set with a hat trick of his own productions and remixes. 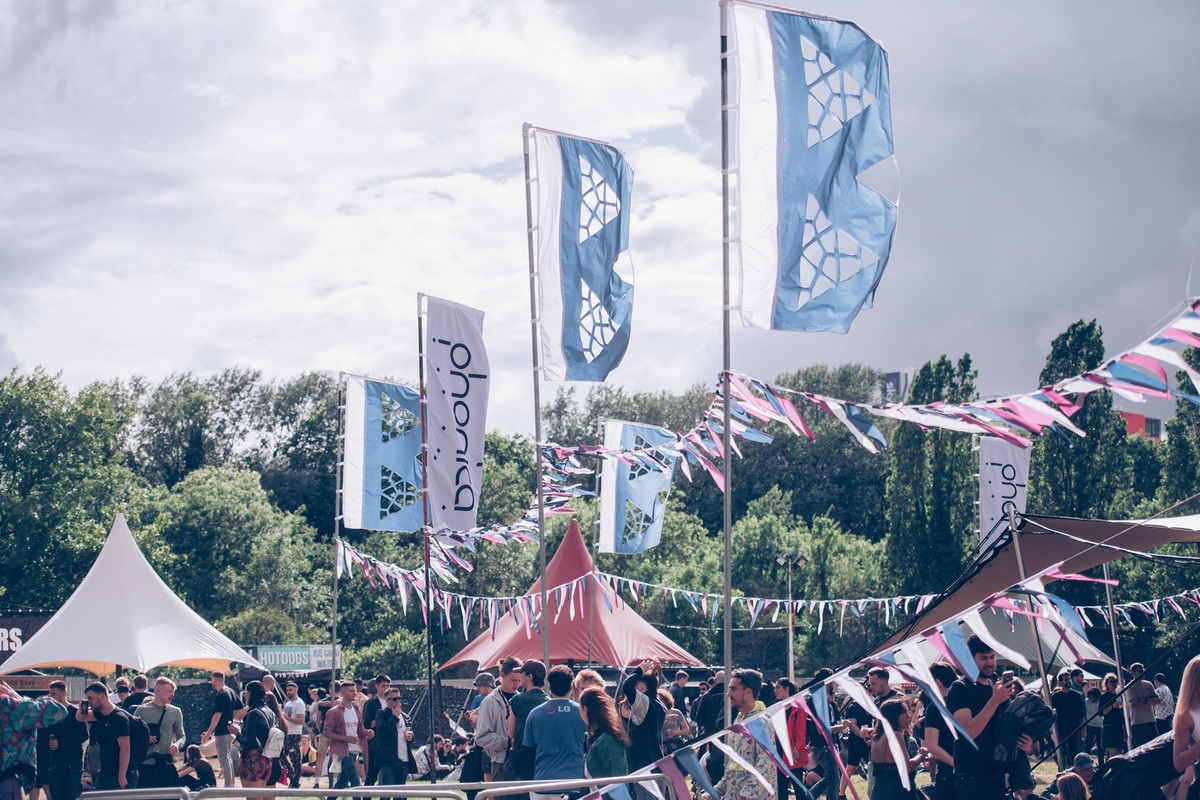 He Said: “A rain-swept Friday debut for Junction 2 Festival meant there were plenty of umbrellas and ponchos on display (read our review here), but a solid music line-up and acts out to impress ensured those who had taken the day off were richly rewarded. Our trip to Boston Manor Park from Brentford train station had us fearing the worse, though - the pouring rain and dark clouds overhead proved a real distraction for the early arrivals even though there was relief when we got beneath the Chiswick flyover which forms the backbone of any Junction 2 experience.

“From there we assessed our options, but the open-air main stage and cabin busting tunes in The Woods seemed risky affairs. Instead, we found ourselves grooving to S_AS at the fabric XX takeover at The Bridge before heading to The Stretch where Phonica’s opening acts Peach and then Carista were providing the warm-ups. With the Warehouse needing a little more time to open and the weather clearing, our first experience of the new look main stage with its enclosed dancefloor and raised podiums was of Mr G’s selector set where he was working his way through vintage sunshine tunes such as Carl Davis & Chi-Sound Orchestra’s ‘Windy City Theme’, The Joubert Singers’ ‘Stand on the Word’ and Rufus & Chaka Khan’s ‘Any Love’ which seemed to be working even in the incremental weather. Meanwhile, rRoxymore’s dropping of DJ Logic’s “Please Forgive Me’” was an early highlight in The Woods.

“As the sun started shining, Gilles Petersen got behind the decks to drop a well-timed Roy Ayers’ ‘Everyone Loves the Sunshine’, then showed his diversity by pulling out Q Tip’s “Life is Better” featuring Norah Jones in what was a eclectic selection from the Radio 1 man. Call Super and Shanti Celeste were also benefiting from the sun in The Woods where a real free party vibe was building - Fast Eddie’s ‘Hip House’ got arms in the air as a pick of his rollings beats there. 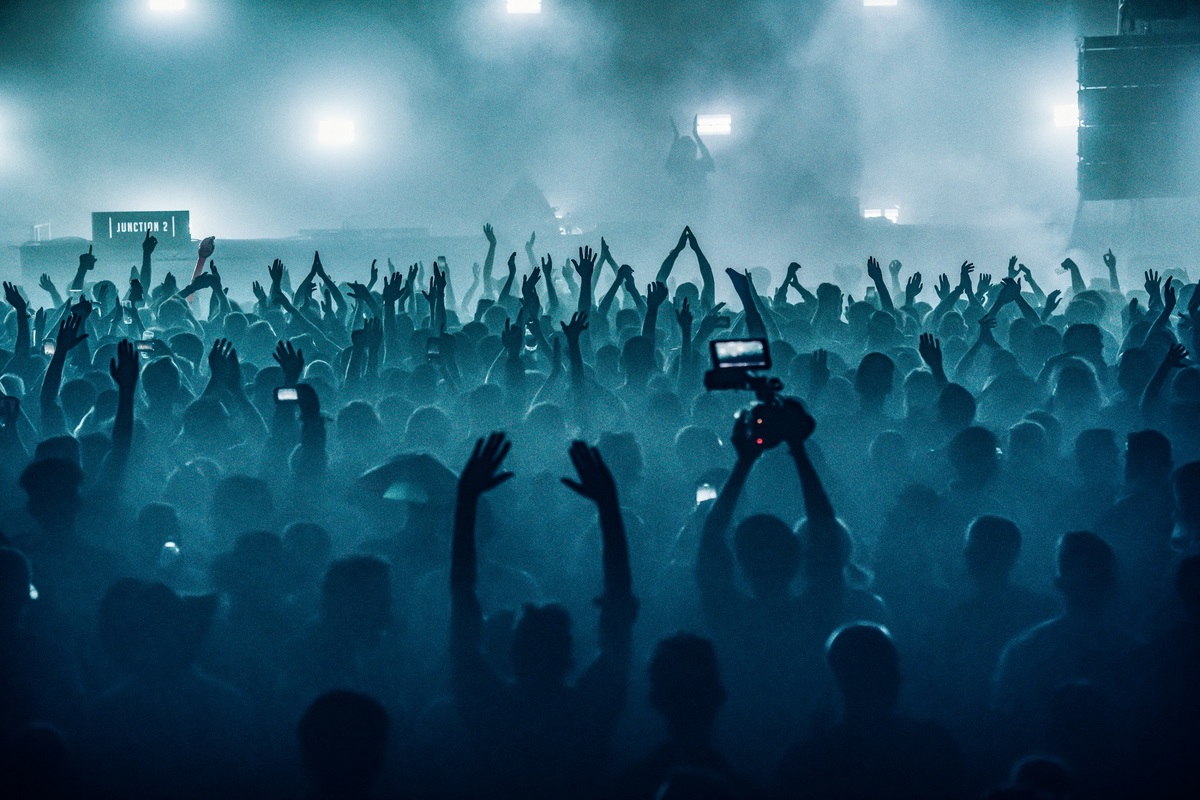 “When the warehouse did open, there were initially issues with the sound as Umfang and Volvox went back-to-back - it seemed the mixer was cutting out - but they would return later for a hard techno set that included Ansome’s ‘Hell’s Mouth’ and showcased them as a fine pairing behind the decks. DJ Stingray’s scratching, electro and the odd techno banger saw a tent that became filled from the rain outside love every minute. Daphni was in his usual upbeat mood with tracks such as Love Committee’s ‘Just As Long As I Got You’ and Paul Johnston’s ‘Soft Spot’, but we would find a blast of pure energy down at The Bridge when DJ Koze closed out his set with a hat trick of his own productions and remixes. His remixes of Låpsley’s ‘Operator’ and Gerry Read’s ‘It’ll All Be Over’ drew positive reactions from the packed stage but it was ‘Pick Up’ that had everyone go wild with the first ‘Saturday’ getting a huge cheer and each of the bass drops eliciting unbridled joy.

“Sadly an ill Ricardo Villalobos left Craig Richards to play out The Bridge alone, however he did so with gusto as his consistently underground selections such as Luca Lozano kept the people bopping while Bicep entertained the masses on the main stage with the biggest crowd seen there all day to close. For those going well off the tracks, Ben UFO was playing all the genres with the sound of JME’s raps bringing The Woods to a close. It was a very rainy day in West London, however there was plenty to enjoy with free ponchos a welcome addition for the unprepared. For the festival’s debut on a working day, this was a fine day of music and next year plenty more might consider taking the Friday off to start their weekend early at Junction 2.” 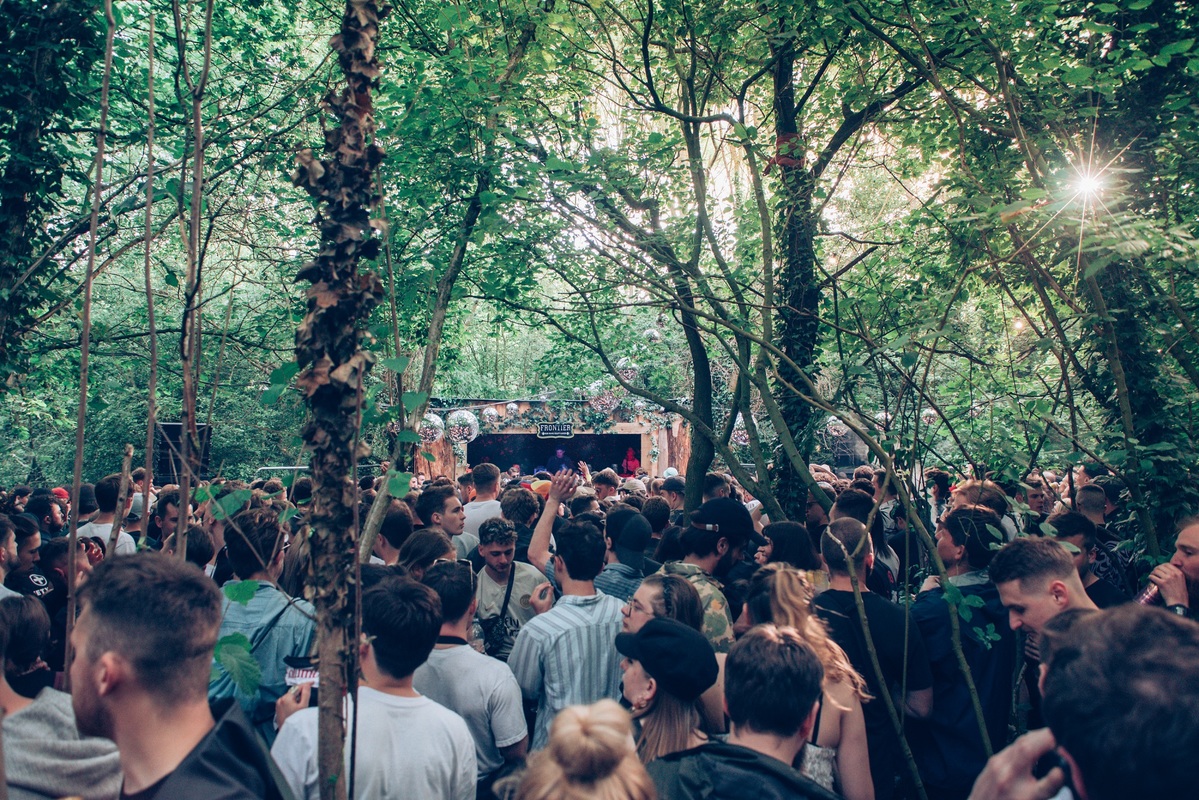 A bit like a four-course menu with wine pairing, DJ Stingray worked through a few different genres demonstrating how they could be paired with techno.

She Said: “Junction 2 has provided a unique festival setting for its four years running, one of the big draws being the intimacy that each stage offers. As the event has grown, amassing an extra stage and drawing a bigger crowd, there is a gradual shift from passion-project to business techno. That said, taking on a second day would mean providing a showcase for more artists across a broader spectrum of techno and tech house. Although the Saturday looked more in tune with my taste in techno, I opted to use a Friday gaunt as an excuse for a “cheeky” day off work.

“Typical that the first day I’d ever taken off work to go to a UK festival would face a down-pour. Previous years had done really well weather-wise, leaving me feel that classic British guilt about standing inside a purpose-built canvas warehouse to watch techno while it was beautifully warm and sunny outside. With the weather app predicting a 90 - 100 per cent chance of rain this year I could indulge guilt-free! 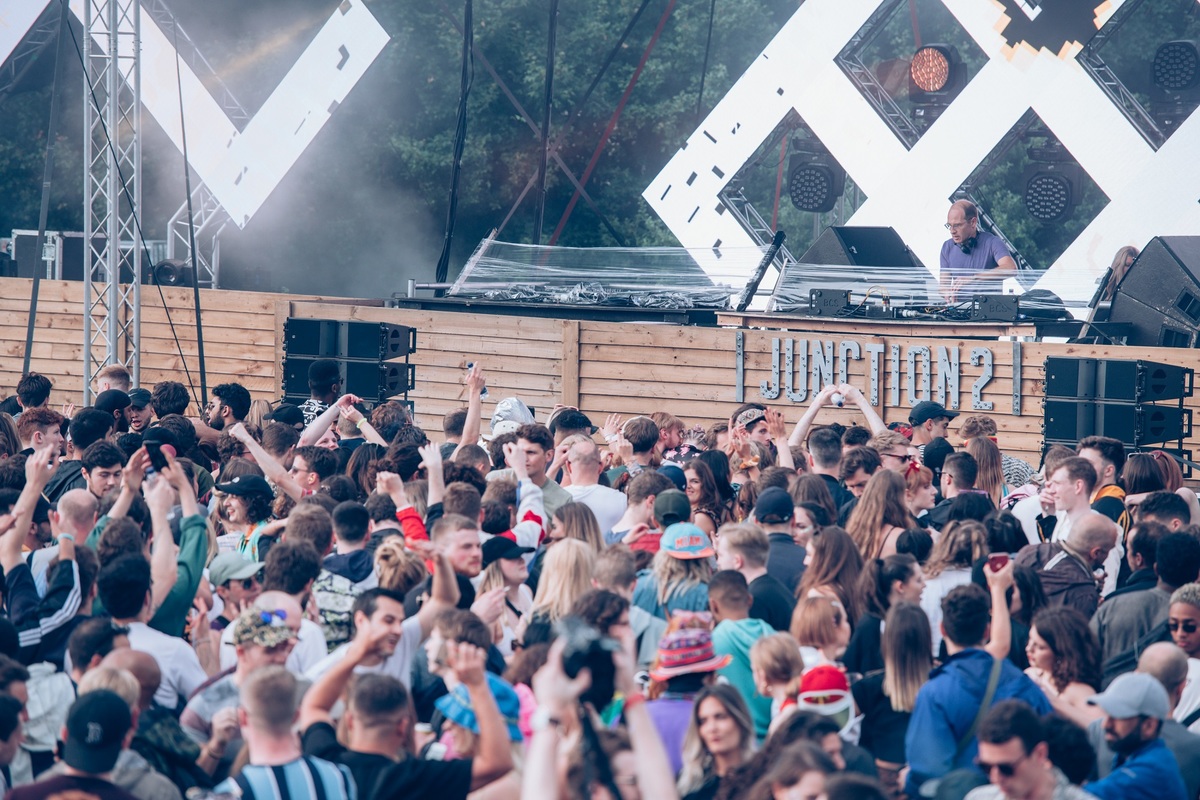 “After a quick loop around, we headed for the Warehouse – normally a trusty techno hotspot – only to find it closed. To avoid showers, we hopped next-door to The Stretch hosted by Phonica where Carista was playing smoochy, shuffle-esque tech-house to a surprisingly big crowd.

“The Main Stage was hosting a lengthy disco set from Mr G which was good for a happiness drop in between checking out the other stages – the Windy City theme tune was playing the first time I passed by and later on the crowd were going mad for Rufus & Chaka Khan’s ‘Any Love’. 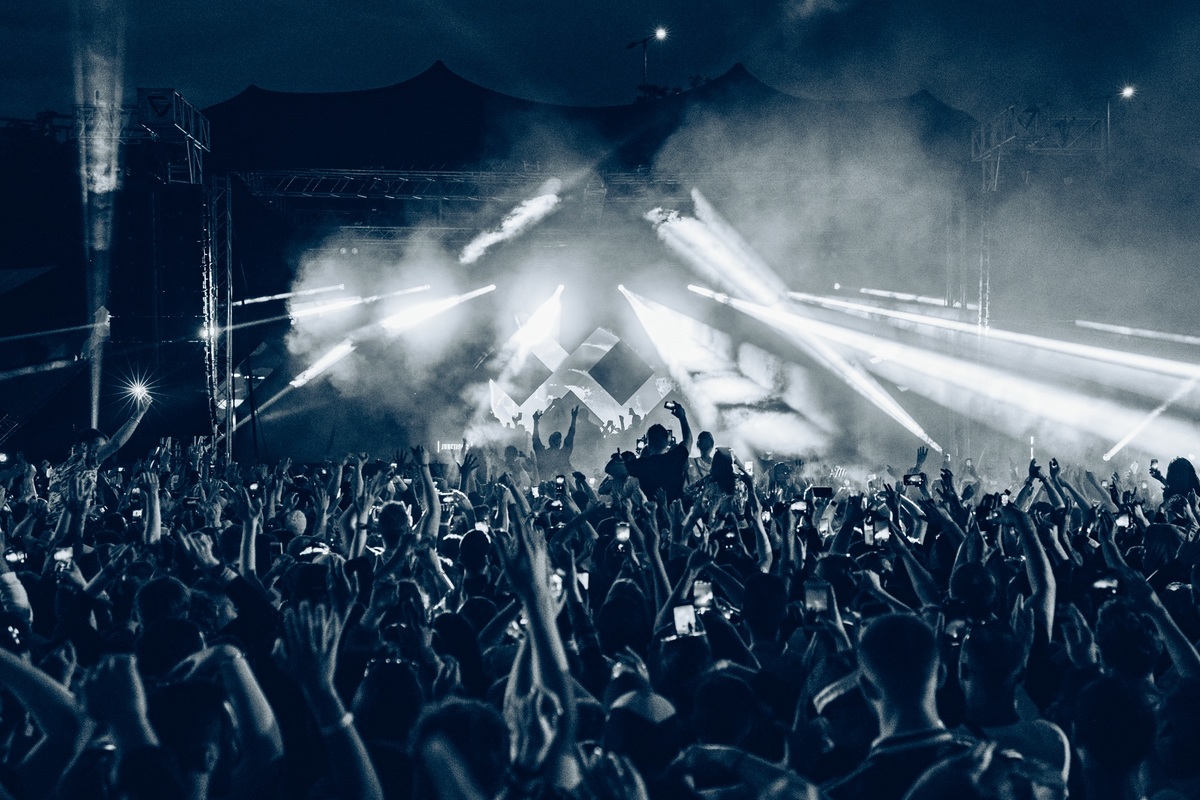 “With the Warehouse back in business, Volvox b2b Umfang slayed a slick and punchy set with Lester Fitzpatrick’s ‘B-Track’ being typical of the track selection sounds. Annoyingly for them, the sound kept dropping. Weirdly, this gave the advantage that everytime it switched back on, they sounded harder, faster and volumes better every time before it dropped completely and the set came to a close. DJ Stingray followed with a fascinating, dynamic set. A bit like a four-course menu with wine pairing, Stingray worked through a few different genres demonstrating how they could be paired with techno, starting with a a slick, stripped down bassy sound and manoeuvring into a darker, eerie sound with a hint of rock and metal. 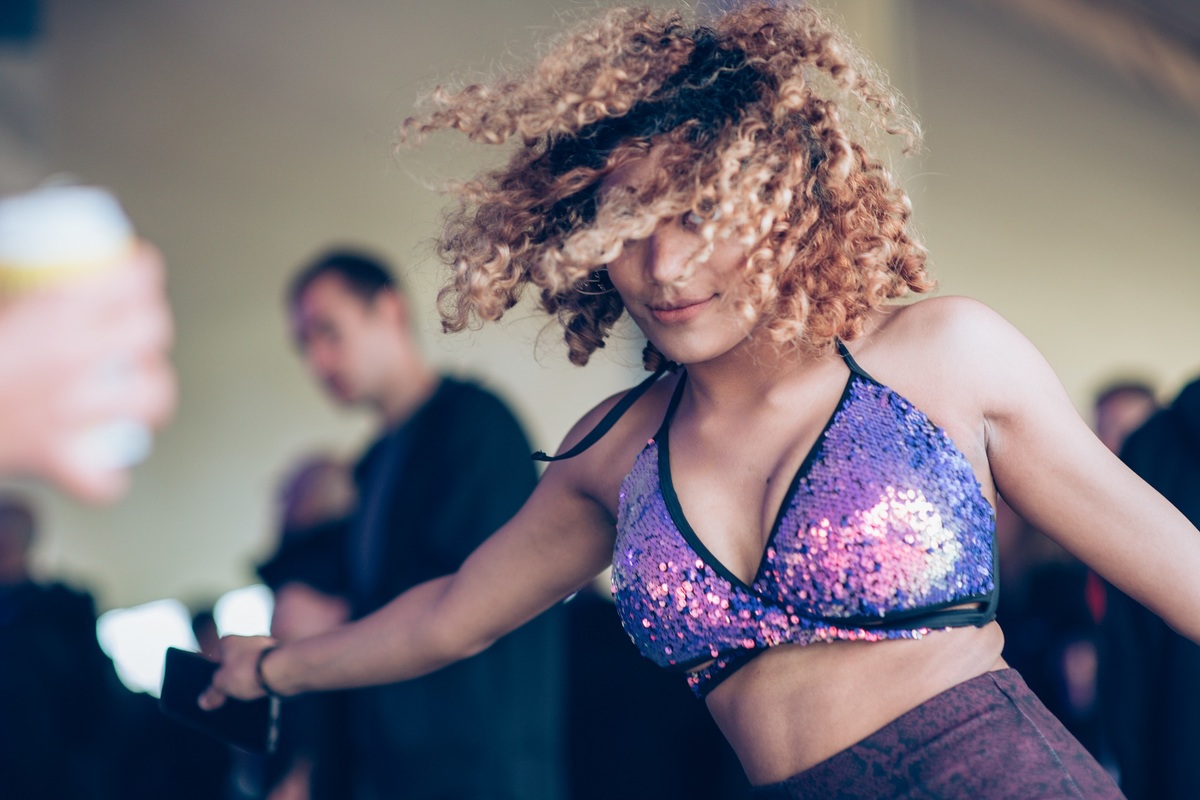 “The Woods is the event’s smallest stage, but if you’ve been to the event a few times and have got over the initial wow-factor of The Bridge stage, this provides something novel, intimate and quirky. The crowd were stretched beyond the clearing and into the trees in the surrounding woods – one of the signs that the festival was expanding on the previous years. rRoxymore drew a notably cool, slightly older crowd than any other stage, with a sudden age swap happening when Call Super b2b Shanti Celeste followed playing poppier tracks like KW Griff – ‘Be Ya Girl’ that got all the kids singing along while filming their IG stories. 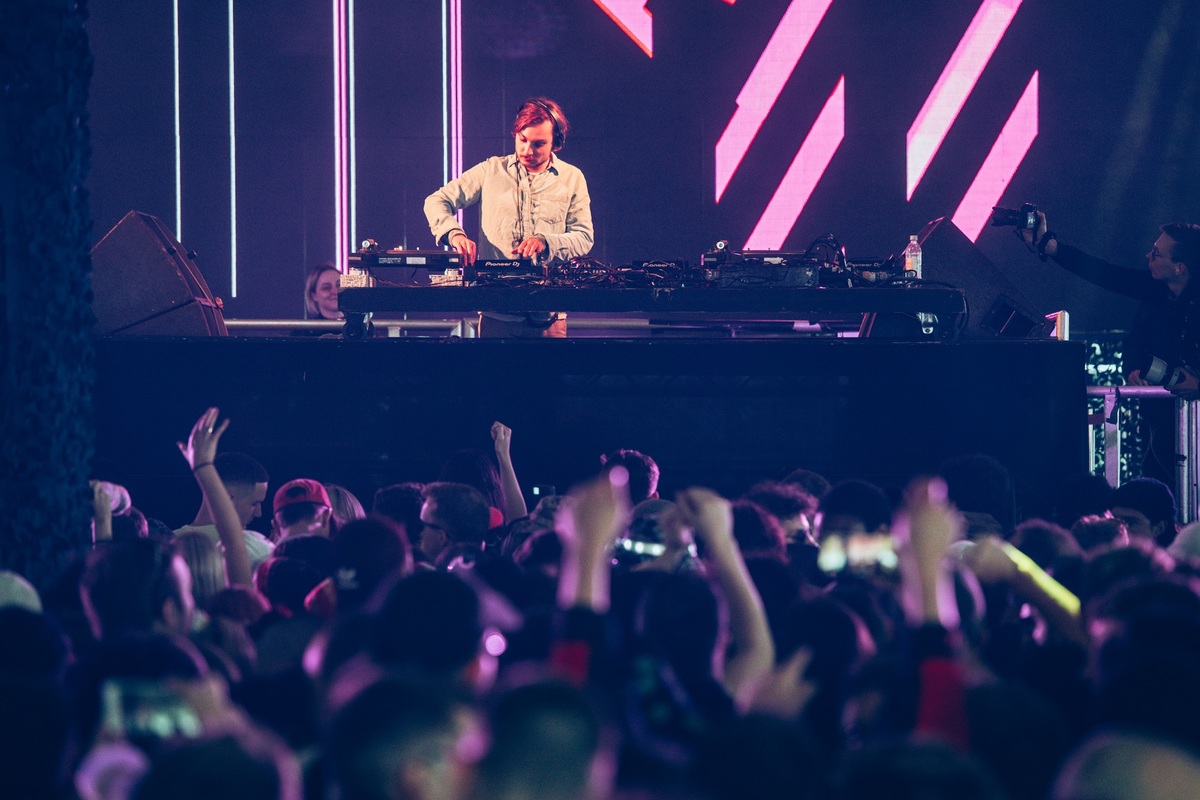 “Moving to The Bridge, the crowd was cosily packed for DJ Koze who selected a series of mood-lifting tracks with his own ‘Pick Up’ setting the tone for everyone bouncing and bantering around. The mood was decidedly friendlier here than any other stage, with the news of Ricardo Villalobos cancelling his closing set providing a good excuse for people to have a chat. While it was unfortunate, Craig Richards did a good job maintaining the vibe without his b2b moving straight into a darker, distinctly techno sound with Luca Lozano – ‘L.U.K.E’ as a starting track.

“Overall, the event still feels niche enough not to feel like a commercial enterprise, with thoughtful touches like decorations made with repurposed plastic bottles and information points encouraging revellers to recycle focusing the crowd on positive messages.” 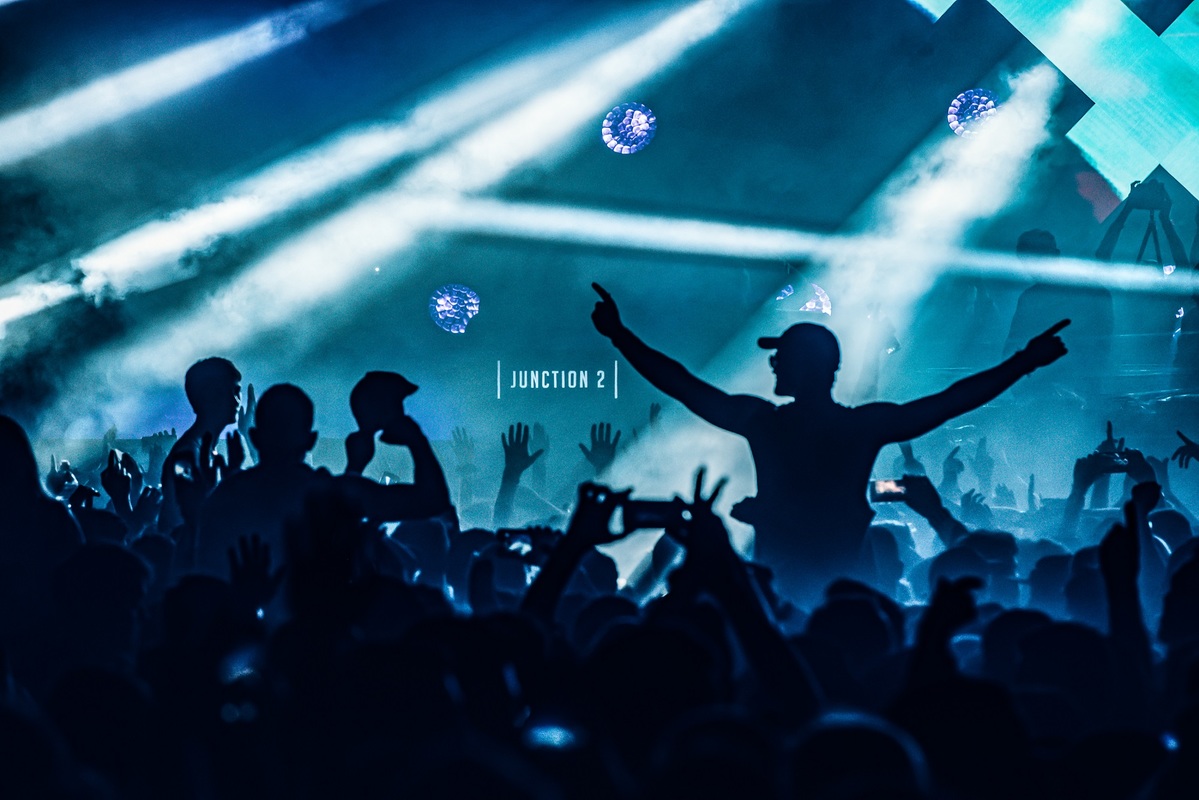 She Said by Ann McManus, images by ShotAway.