Junction 2 Festival returned to London’s Boston Manor Park for the third time on Saturday, June 9th for another day of techno across five stages. Carl Cox, Adam Beyer, Nina Kraviz, Joy Orbison, LSD, Dixon and Âme were among the acts playing - Mike Barnard and Ann McManus were there. 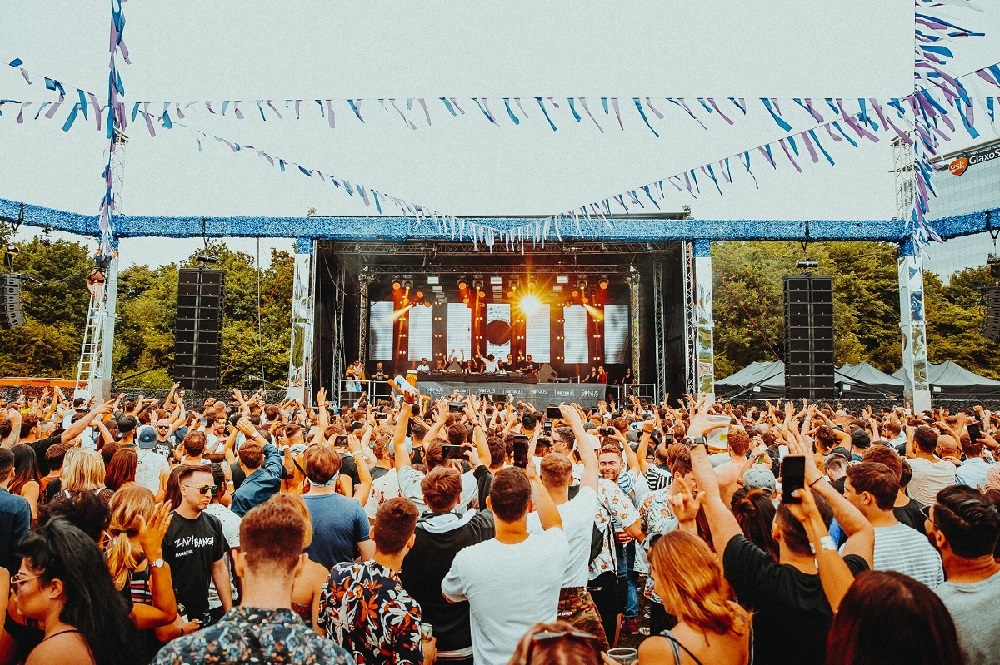 Moonear and Lutz rode in with a pulsating blend of house, techno, acid and disco where the beat never let up, it just seemed to evolve with twists and turns that enthralled the woodland clearing.

He Said: “The first Junction 2 Festival in 2016 was something of a godsend for techno fans in the south east of England at the very least. A site that’s not a flat, open park with copycat big tops and soundsystems that are turned up loud to channel some of our favourite acts: we couldn’t wait to back in 2017 and the same was the case this summer. Fortunately, another sunny day greeted us as we walked from Boston Manor station to Boston Manor Park, and we noted the number of stewards and toilets had clearly been increased to ensure the crowd behaved themselves en route to the gate on what is a very residential road.

“Inside, the layout retained the Drumcode-themed stage under the M4 – now dubbed The Bridge – while Sonus once again took control of the outdoor Hex stage facing the opposite direction to last year nestled just in front of the trees that house the Into The Woods stage hosted by Oasis Festival. Meanwhile in the first field we came to, where the hard-edged techno of the Warehouse had been adjusted to have a wide but shallow dancefloor so everyone inside was closer to the stage and the Pavilion – hosted by LWE’s sidexside concept – had shifted slightly so there was more space between the two, now felt more of a hub and would quickly become a favoured chill spot for weary limbs as the day went on.

“Early doors we made a trip to every stage to see a re-arranged Marcus Worgull at the Pavilion (Trikk’s flight was delayed), Jay Clarke in the Warehouse, Dana Ruh at the Hex, NAME at Into the Woods and La Fleur at The Bridge. We were immediate struck by how punchy the bass was across all the stages even at 1pm, and set ourselves up in the middle of The Hex to say our hellos to friends arriving throughout the afternoon. Ruh warmed the crowd nicely as we chatted away, then Mind Against stepped up with some initially sparkly, mid-tempo selections that after an hour started to weave into a more energetic pace. They built the atmosphere up nice at the Hex – no mean feat given its size and time of day – and the party spirit was established. 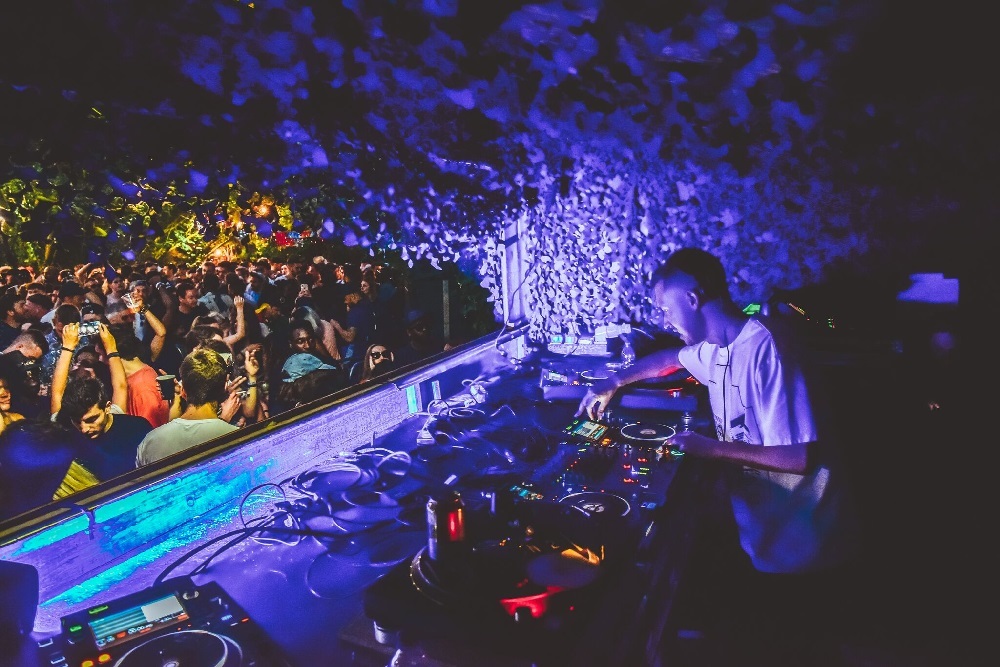 “The late afternoon and evening were spent watching the two sets we’d been most excited about delivering in spades. First up we ducked amongst the trees to catch Sonja Moonear b2b Nicholas Lutz expecting something a bit special, and it was. William Djoko handed over to the pair with the joy of ‘W18’ by Cassius, then Moonear and Lutz rode in with a pulsating blend of house, techno, acid and disco where the beat never let up, it just seemed to evolve with twists and turns that enthralled the woodland clearing to the point there were people dancing in amongst the trees just to get in on the action. There was almost a free party vibe, cut off from any signs of civilisation and the first major high point of Junction 2 Festival 2018.

“The second was started with the difficult decision to split from Moonear and Lutz to go check out another collaboration: LSD – the live techno group made up of legends-of-the-underground scene Luke Slater, Steve Bicknell and Function. A huge hit for us at the Junction 2 launch party at Tobacco Dock, LSD this time had three hours to weave their non-nonsense hard techno and used them all to create an inventive set that began very lo-fi but built bassline, played with the volume and worked its way into a crazed dancefloor workout by the close. 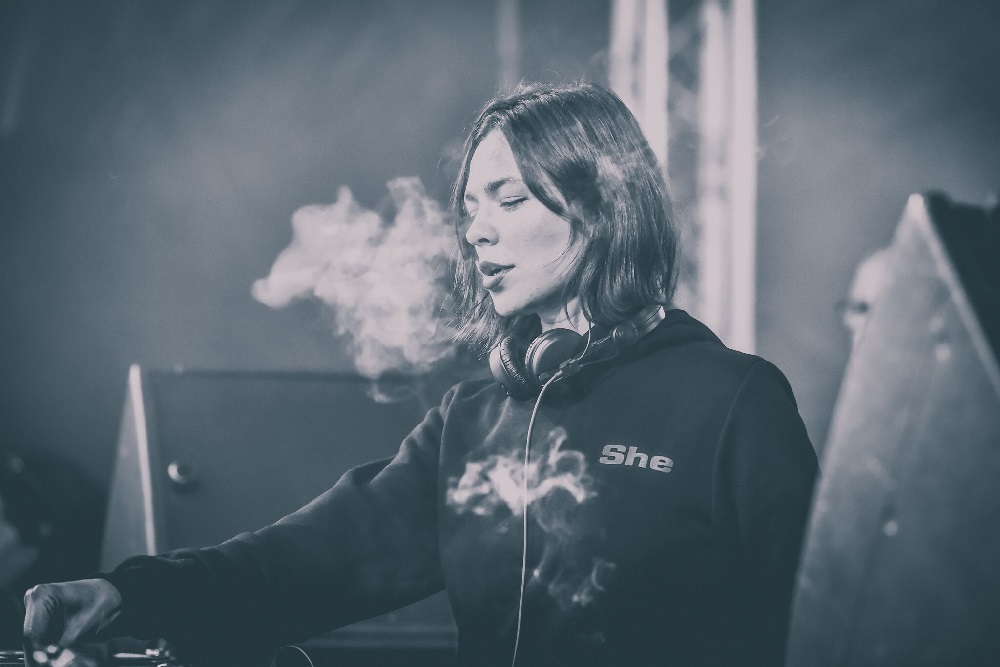 “Hyped up, we headed to the Hex for Nina Kraviz who seemed keen to play around with some abstract noises early set which didn’t make for a very engaging experience for such a big stage so we’d make our way to The Bridge to catch the end of Adam Beyer’s set and his back-to-back with Carl Cox that followed. Naturally it proved to be the most popular choice so space was at a premium, and getting within the front portion of the dancefloor looked like too much stress, so we held back as Beyer’s Drumcode sound swamped that of Cox’s more playful techno yet still produced a set that drew wild cheers as bassline dropped and classics such as Future Sound of London’s ‘Papa New Guinea’ were used to vibrant effect. Beyer and Cox looked like they were having a ball on stage, and regularly took to the microphone to thank the crowd – it’s clear there is a very bright future for Junction 2 Festival as it continues to develop its reputation as a major techno festival, not just in the UK, but in Europe as well.

“Last year Junction 2 Festival made true on the potential established in its debut year. Expansion from three stages to five by taking advantage of its unique woodland space and a previously under-used field, LWE made good on the scope for bigger and bolder production as well as a more cohesive feel. One year on, Junction 2 tweaked its site layout to ensure the character of each stage was retained and there was no doubting the quality of the soundsystems, organisation and DJs booked. Yet aside from Moonear, Lutz and LSD, there could arguably have been a few more curve balls taken, perhaps to showcase some more emerging talent or seeking out more performers who catch the eye as seen less often in London or not played Junction 2 before. After a sold out 2018 and deserved plaudits for giving the UK a true techno festival, it will be interesting to see what one of the premier event producers in the UK will do for 2019 in terms of developing the identity of their stages further with a few surprises, or if there’s an, admittedly winning, formula they are keen to stick too. I would not be surprised if they end up doing both.” 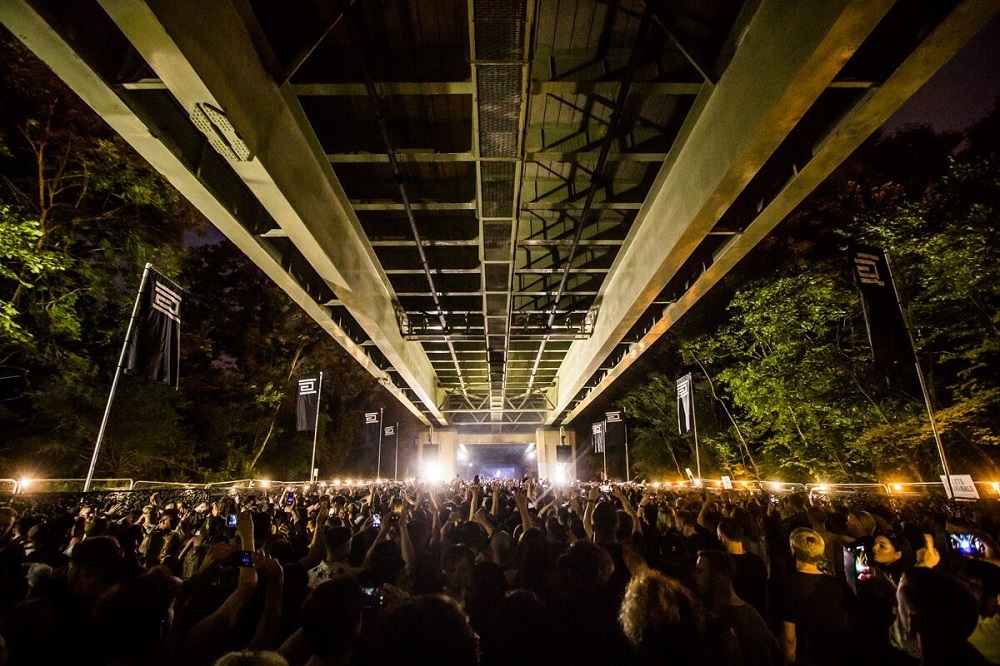 Berghain resident’s LSD fired out rounds of industrial techno beats relentlessly from the start - I overheard it being described by one reveller as sounding like they had walked into the Toyota manufacturing plant.

She Said: “Junction 2’s second year had seen a very successful expansion, with the additional Sonus stage and a huge uptake in ticket sales. This year’s event looked to be even more successful again, as demonstrated by the weeks of reminders on social media that the event was sold out. I worried that an increase in popularity would detract from the festival.

“In an effort to avoid the queues and to catch La Fleur, our group were on site early to show the first-timers the site and do a quick recce before the crowds swarmed in. The site had re-arranged this year, with the Hex stage hosted by Sonus relocated so as to face a different angle from before - the benefit of this being that the GSK office building was not directly in the line of the crowd’s vision making it easier to lose yourself in the music, unhindered by any reminder of work. Dana Ruh was spinning light-hearted tech-house that got the early crowd bopping around, exclaiming how great a start they were having so far, catching rays in the sun. Wandering round from the Hex stage to the Into The Woods stage, the party was in full swing to a slightly different sound courtesy of William Djanko steering more to a house-enthused set of tunes with Harry Romero’s ‘Tania’ going down a treat as we passed through. 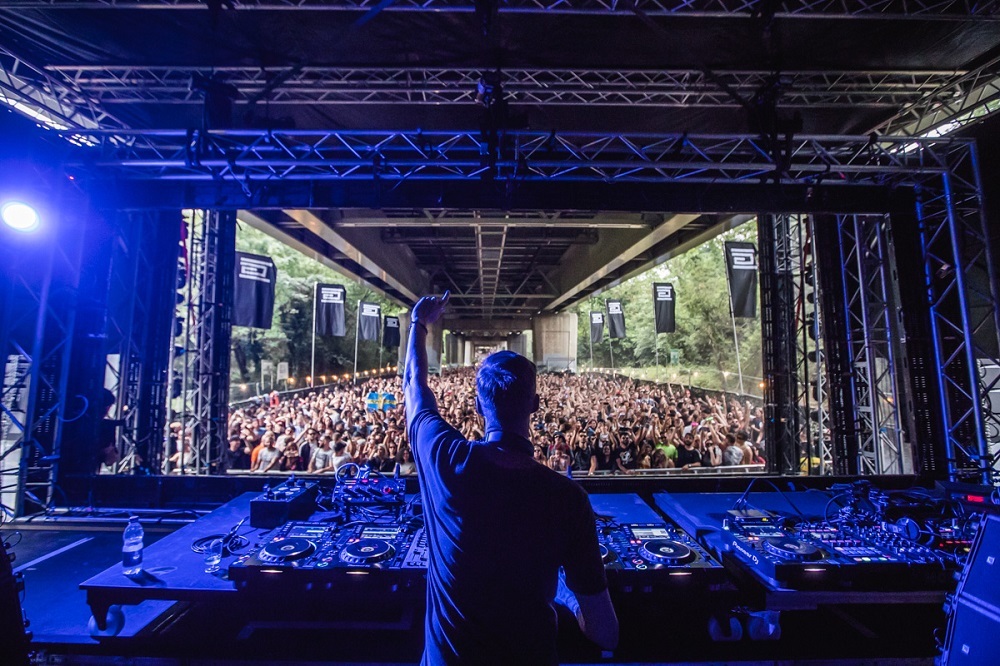 “The Bridge being Junction 2’s USP, Drumcode’s signature undulating rhythm was complemented all day by an array of multi-coloured lasers extending the length of the dancefloor corridor. Le Fleur mixed up a darker sound than the other stages at that time, with Mathias Kaden’s ‘Nova’ and Themba’s ‘Who is Themba’ creating waves. In knowledge of the fact we would be in the Warehouse for LSD’s three hour set, we divided the afternoon between The Hex and Into The Woods. Berlin-based duo Mind Against’s set stayed true to their IDM/ambient tech-house style with long winds and well-constructed drops. In contrast Mind Against’s deep, moody sound, Sonja Moonear b2b with Nicolas Lutz provided an uptempo, crunchy deep house set, starting off with a sample that sounded a bit like someone tuning a new electric guitar which evolved into a solid beat.

“Berghain resident’s LSD (Luke Slater, Steve Bicknell and Dave Sumner aka Function) fired out rounds of industrial techno beats relentlessly from the start. After the jovial mood of Into The Woods, I needed a bit of time to adjust to the harsh minimal reverberating through the dark, smokey tent. I overheard it being described by one reveller as sounding like they had walked into the Toyota manufacturing plant. It wasn’t long before the faster tempo became more natural and the techno stomp second habit. When one of our group checked their “health” stats on Apple’s health app the next day, they had worked up 43k steps and I’m sure a large part of those were drummed into the floor of the tent to LSD particularly when Stop File’s ‘Rifles’ shot out. It was infectious.

“Carl Cox b2b Adam Beyer promised to be a legendary pairing of techno-masters and for many this was this year’s pièce de résistance. It lived up to the hype and the duo married their sounds excellently, both staying true to their individual styles - Beyer’s warehouse-ready, deep and metallic techno and Cox lighter and more transient with frequent vocal samples. The entire corridor was alive with hands bumping and clapping throughout. The pair looked delighted with themselves as they embraced the crowd and Beyer evidently satisfied himself that he had executed another magnificent event.” 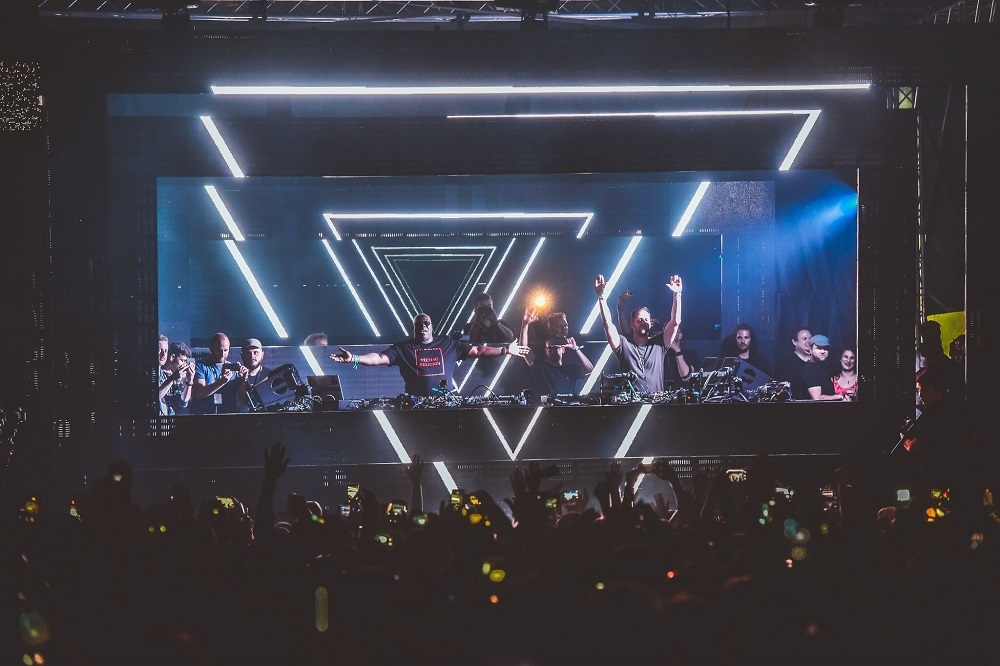