London club promoters LWE hosted their first festival on Saturday, June 4th inviting fellow party starters The Hydra and Closer along with label Drumcode to curate three stages of techno. Using west London’s Boston Manor Park for the first time as a festival space, the action took place beneath the M4 flyover and a woodland region of the green space. Mike Barnard and Ann McManus give their views. 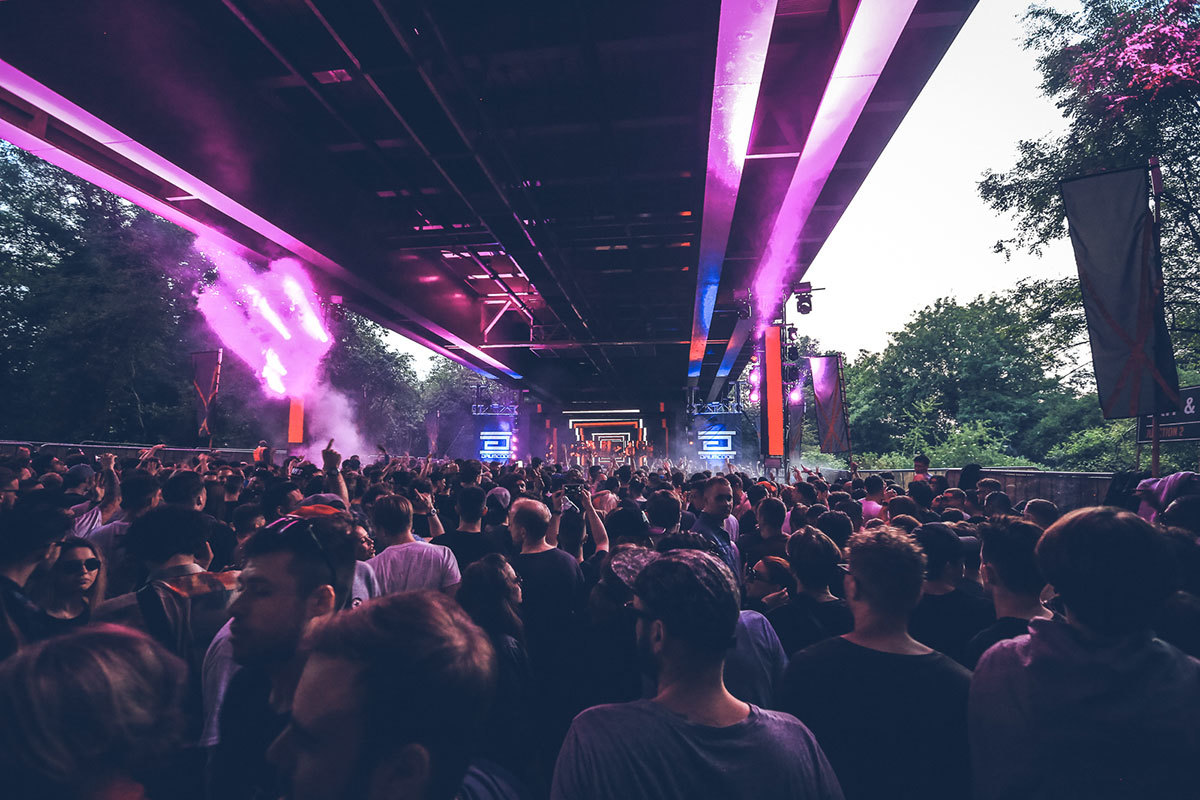 LWE have set very high standards for a follow up to Junction 2.

He Said: “Boston Manor Park may well become a popular festival location judging by LWE’s success with Junction 2. Set beneath the concrete canopy of the M4, initial entry onto the site had the look of an industrial corridor leading from the gate through to the distant main stage via a bridge over a stream half way. Today it was like a pilgrimage to the distant beat of Drumcode techno as the label hosted the main stage and Ida Engberg was busy pounding out the tunes following a warm up set from Boxia when we took a first look. The sound boomed down the long space at an intensity rarely heard at urban music festivals with an impressive lighting array around the DJ booth adding a visual gloss to proceedings. It was hard to be sure exactly how many revellers could fit into the space, but certainly in the 1,000s, as looking back from the front the dancefloor seemed to stretch back forever. 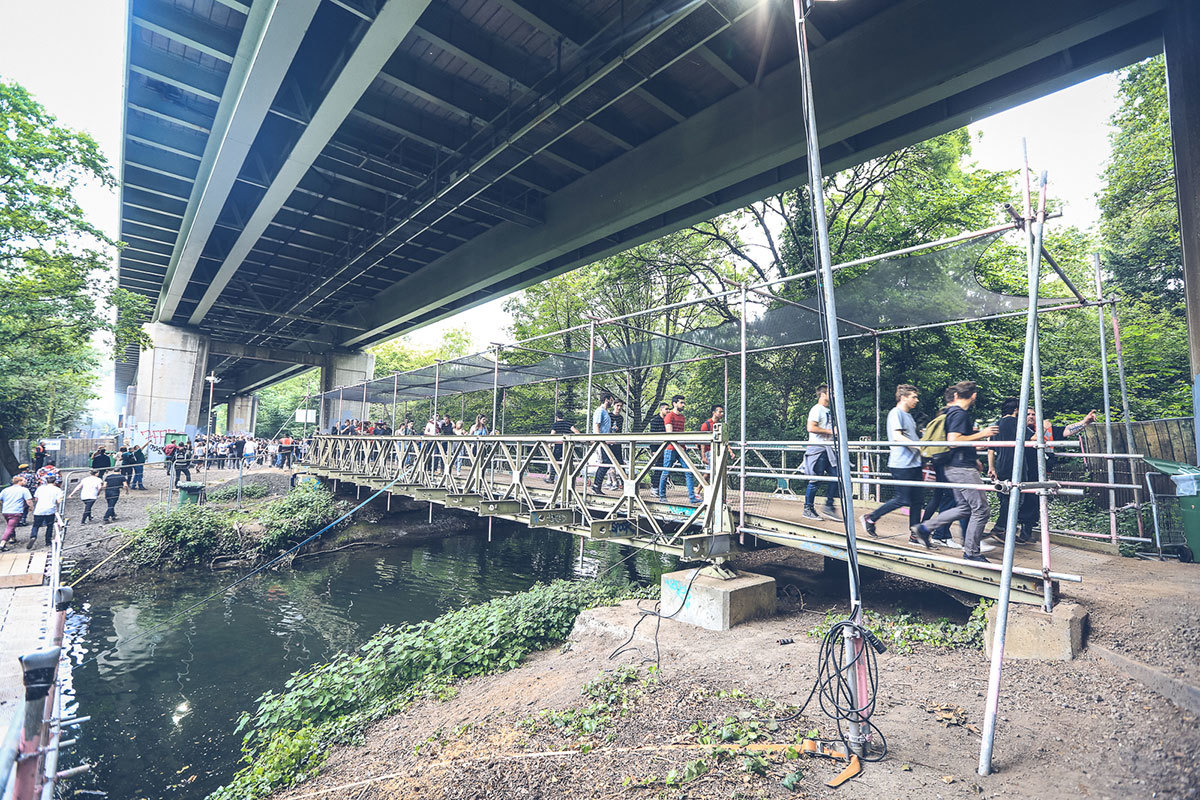 “Flanking this vast rave corridor was woodland in which a second area of the festival had been set up. Paths weaved into the trees leading to two clearings. One was a food meadow offering space to sit down and refuel, the other was the second main space with two stages: The Hydra’s celebration of 10 years of Electric Minds under a huge canopy and Closer’s takeover of a tent decorated to look like an abandoned London warehouse from the outside. 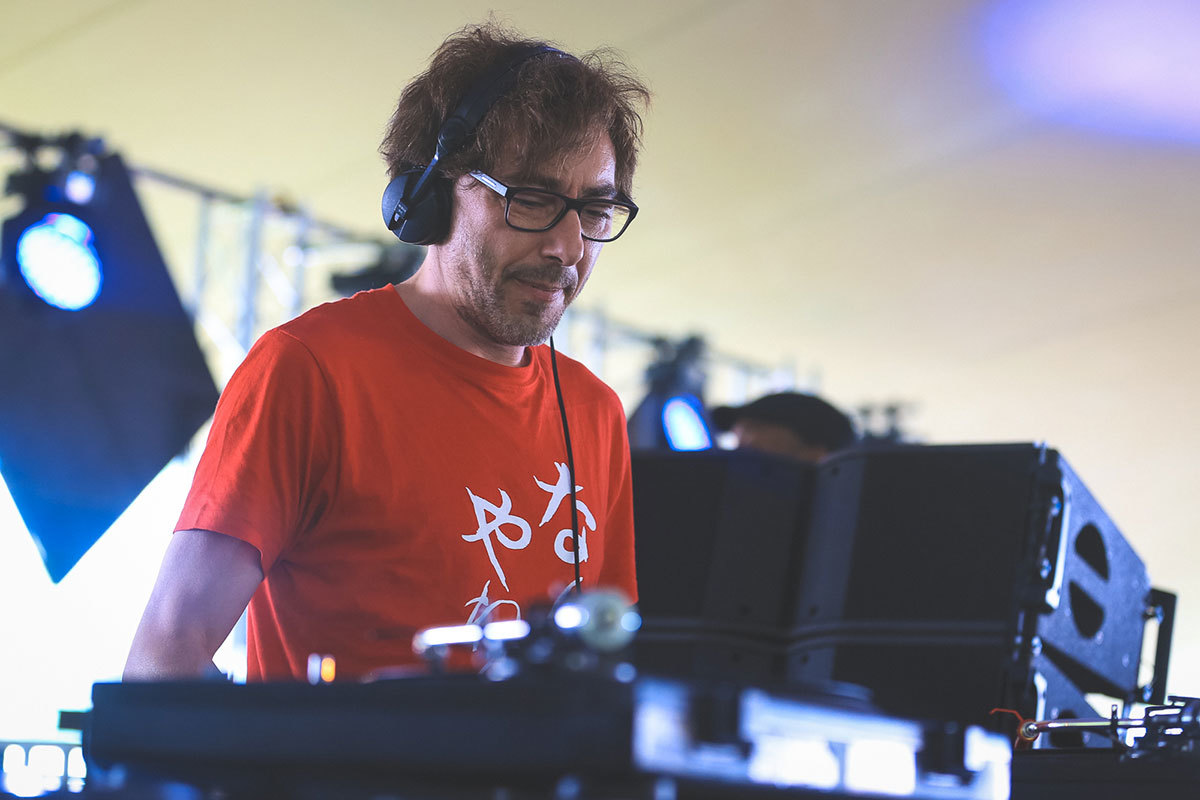 “The blacked-out Closer stage looked as much like a warehouse on the inside as the outside where Scuba was behind the decks, though the sweltering temperatures meant we headed back outside to enjoy the sun and The Hydra tent with Move D playing a soulful selection of house and techno in the mid-afternoon. The open-sided tent was perfect to allow for the music to flow through the crowds who could sit outside or dance under the roof, creating an organically social area that would act as a hive of activity away from the main stage. We’d venture back to Drumcode as Carl Craig brought an end to his live Modular Pursuits set, though his balearic techno felt contrived and ill-fitting on a vast stage between Engberg and the rinsing double act of Pan Pot. Craig should perhaps save this experimental alias to more intimate surroundings. As Pan Pot awoke the reveller from their slumbering with an powerful two-hour set, we took another look back at the second stages to find Mr G’s live set a lot harder than expected at The Hydra and Marcel Dettman taking Closer into the early evening with a deep set featuring Art Crime’s delightful “Show Interest” at the end. 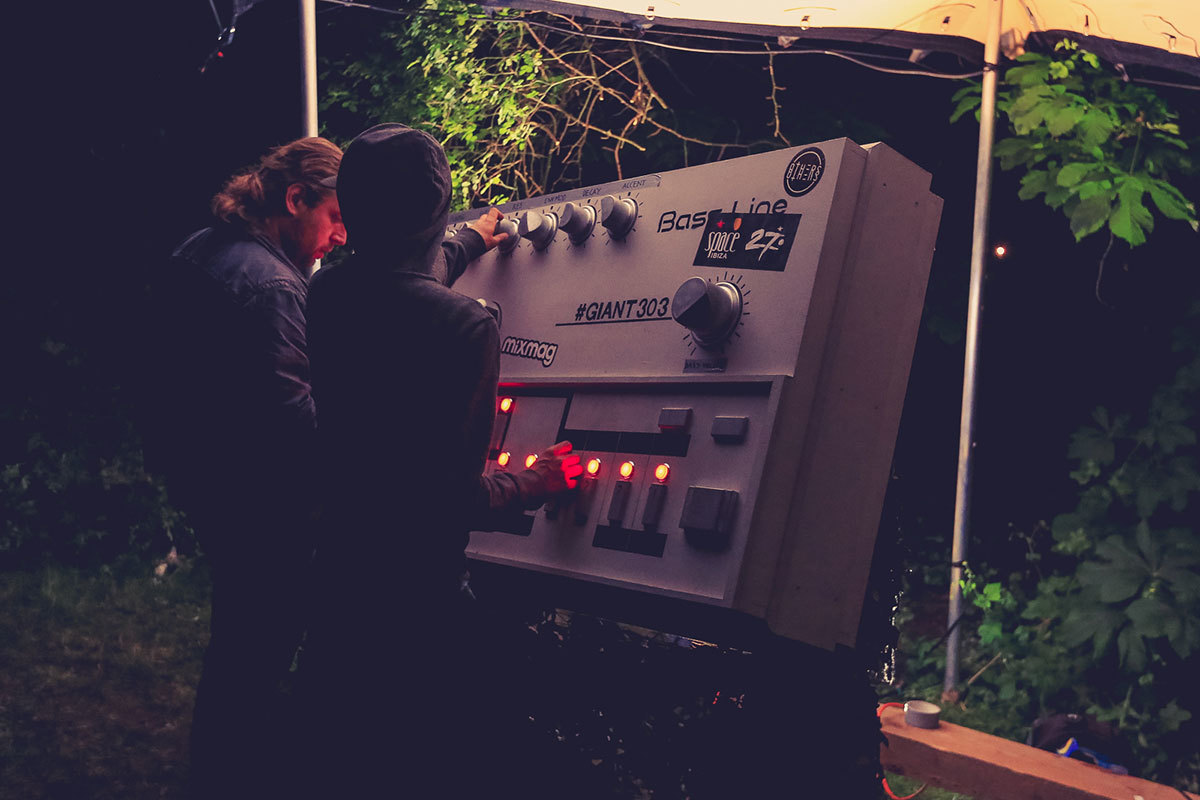 “Feeling a need to get involved at the Drumcode stage, we ran the gauntlet of weaving through the now-dense crowd up to the front barrier for a dose of Alan Fitzpatrick. Dropping his own production “Love Siren” proved a winner in a high energy set, the Drumcode faithful lapping up every beat. We’d go on to catch half-an-hour of Nina Kraviz on an acid tip in the sweaty Closer tent and have a blast on the giant synthesiser hidden in the woodland - just missing Fitzpatrick’s play on the oversized beat-maker - before getting back to Drumcode with label boss Adam Beyer in charge. 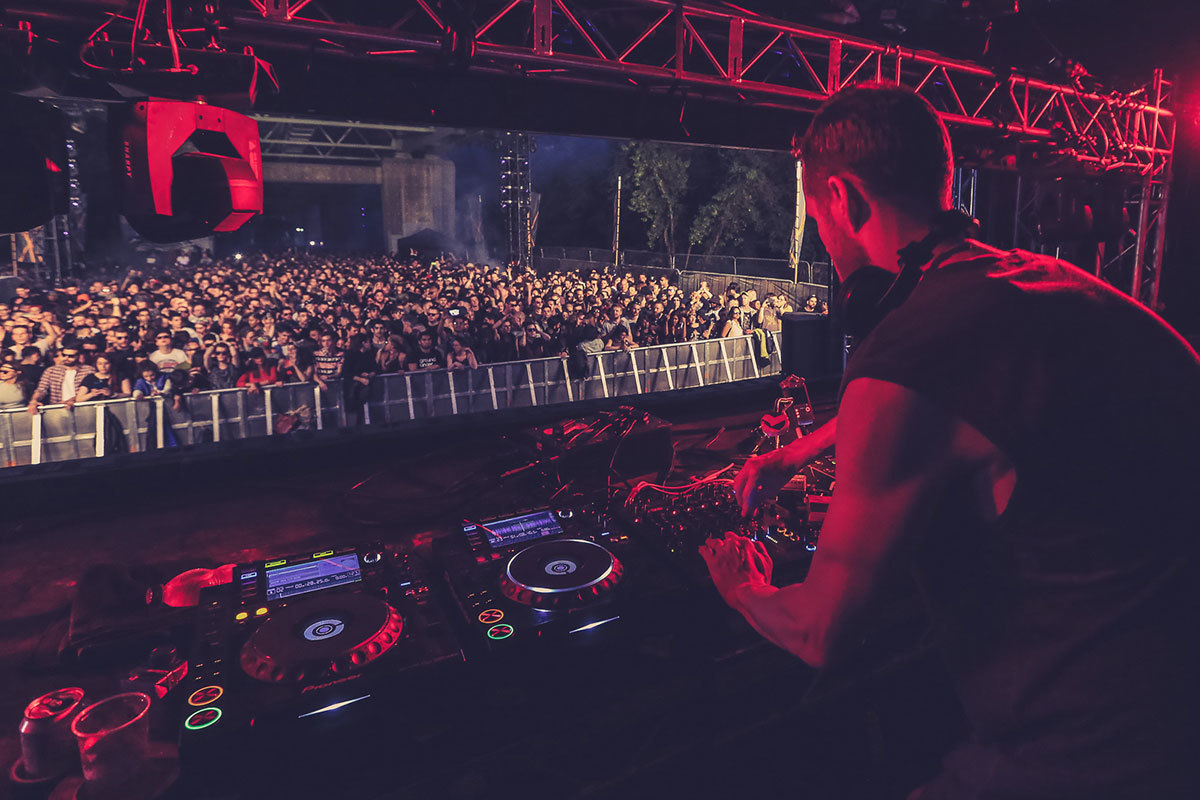 “Beyer looked excitable as he mixed, surprising everyone by picking up the microphone at one point for a spot of MCing. Perhaps not the wisest move, it mattered little as tunes such as a rare hearing of Daft Punk’s “Alive” mashed into System 7’s “Alphawave” ensured this was a memorable closing set to firmly establish Boston Manor Park as a festival site for the future. The combination of a vast, covered central avenue and woodland pockets are a far cry from the flat parkland normally found at urban events providing a more emersive environment. LWE have set very high standards for a follow up to Junction 2.” 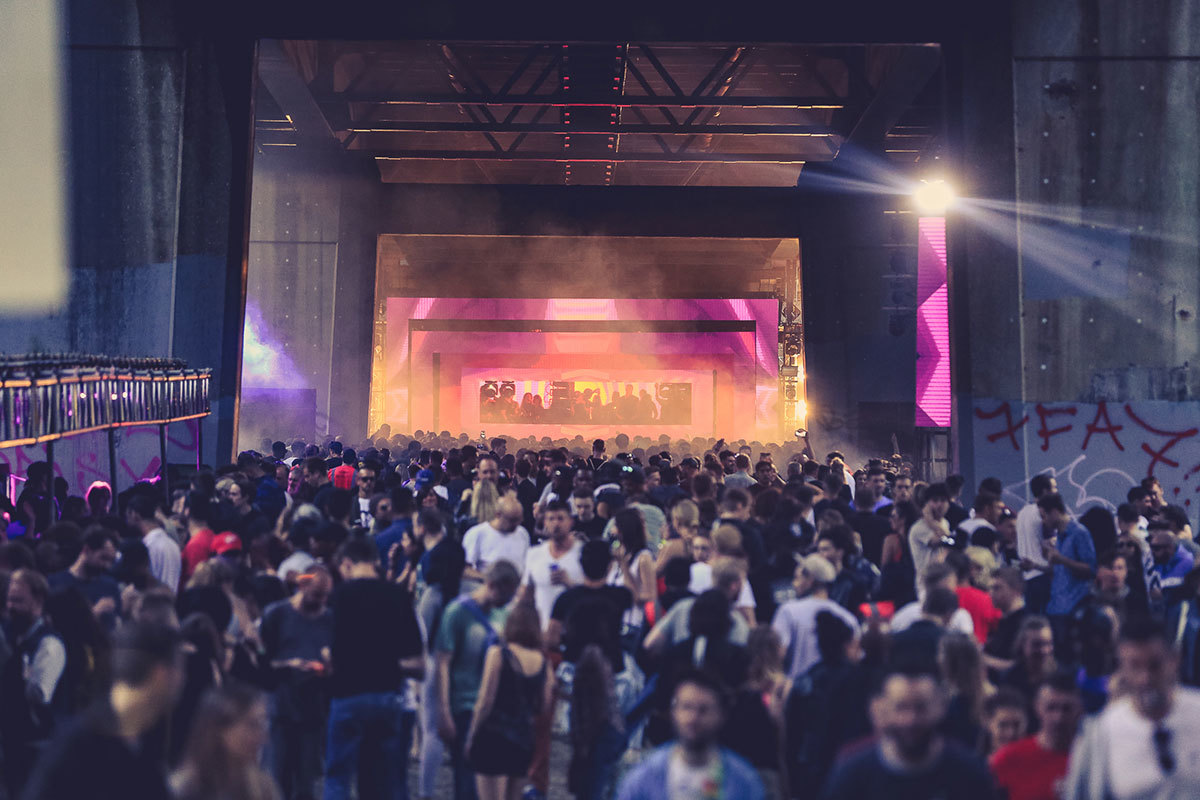 She Said: “Highlighted in the calendar for months, in my view there was nothing about it not to like. With all the hype around East London’s music scene, this finally injected an edge to the generally-considered-pretentious West. It was London’s first festival dedicated exclusively to techno. It was a new venue. There were a few doubters. How they missed out! 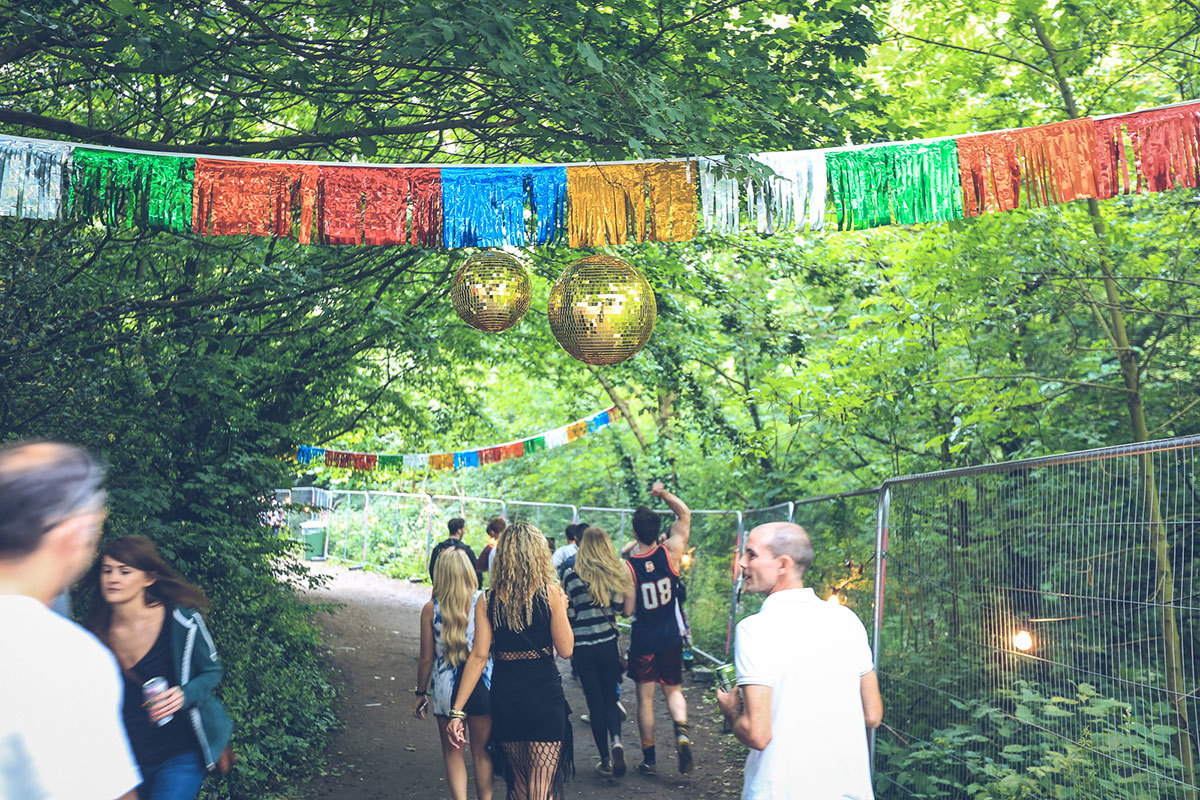 “Situated directly beneath the M4, Junction 2 was uniquely positioned. Adam Beyer’s label Drumcode hosted the headline stage at the far end of the motorway underpass from the entrance. A large stage, complemented by a fantastic LED display, helped revellers feel involved from the moment they entered the grounds, immediately having sight of the elevated stage and the crowd hanging out between concrete columns. It wasn’t all grey though. To reach Hydra and Closer’s stages one had to stroll through a wooded area, encountering a vast grassy expanse of delicious looking food caravans, and, if you could find it, a giant synth. 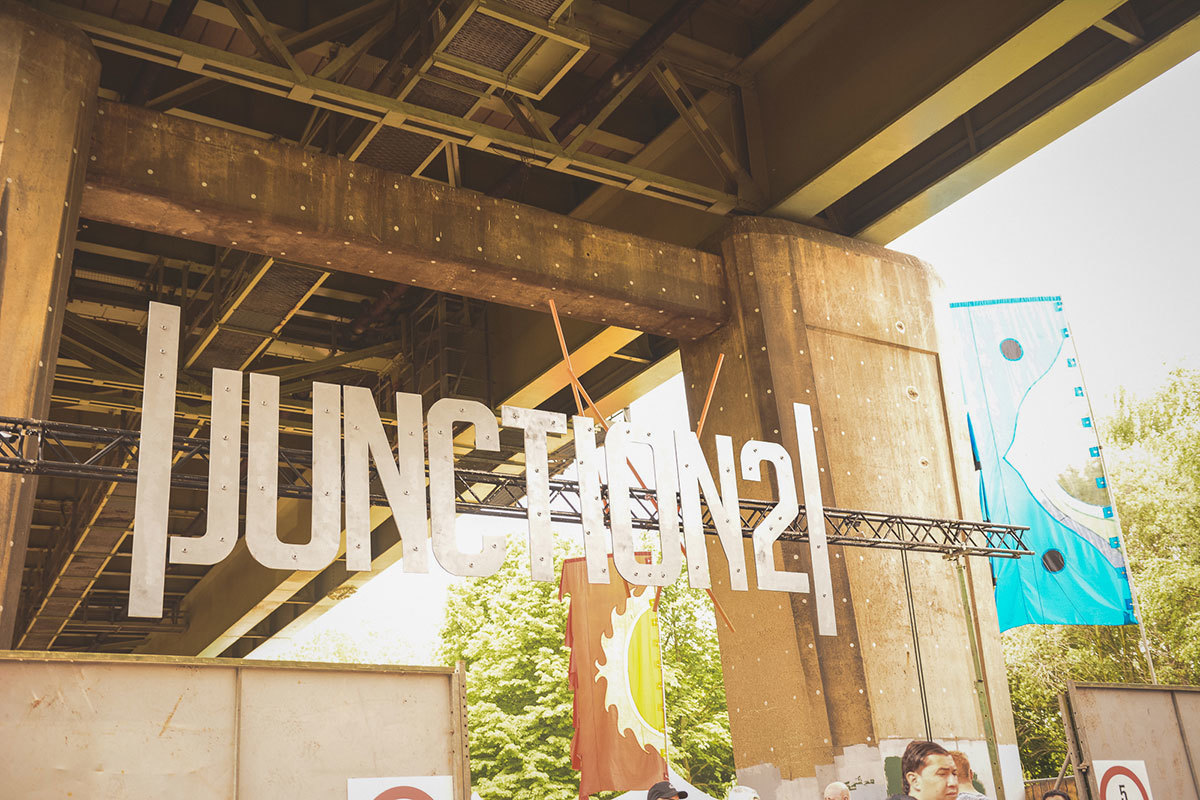 “Keen to see new kid on the Drumcode scene, Boxia, we were a little disappointed that the gates hadn’t been able to get everyone through in time for his set. A huge crowd had amassed by the time we arrived as Ida Engberg was closing her set on the Drumcode stage. Carl Craig followed with his new experimental fusion Modular Pursuits set that reminded me a little of Four Tet. Sets like this are fantastic for chilling out somewhere scenic but this was not the time nor the place, and I wish Carl had come as he was instead of in his new guise. 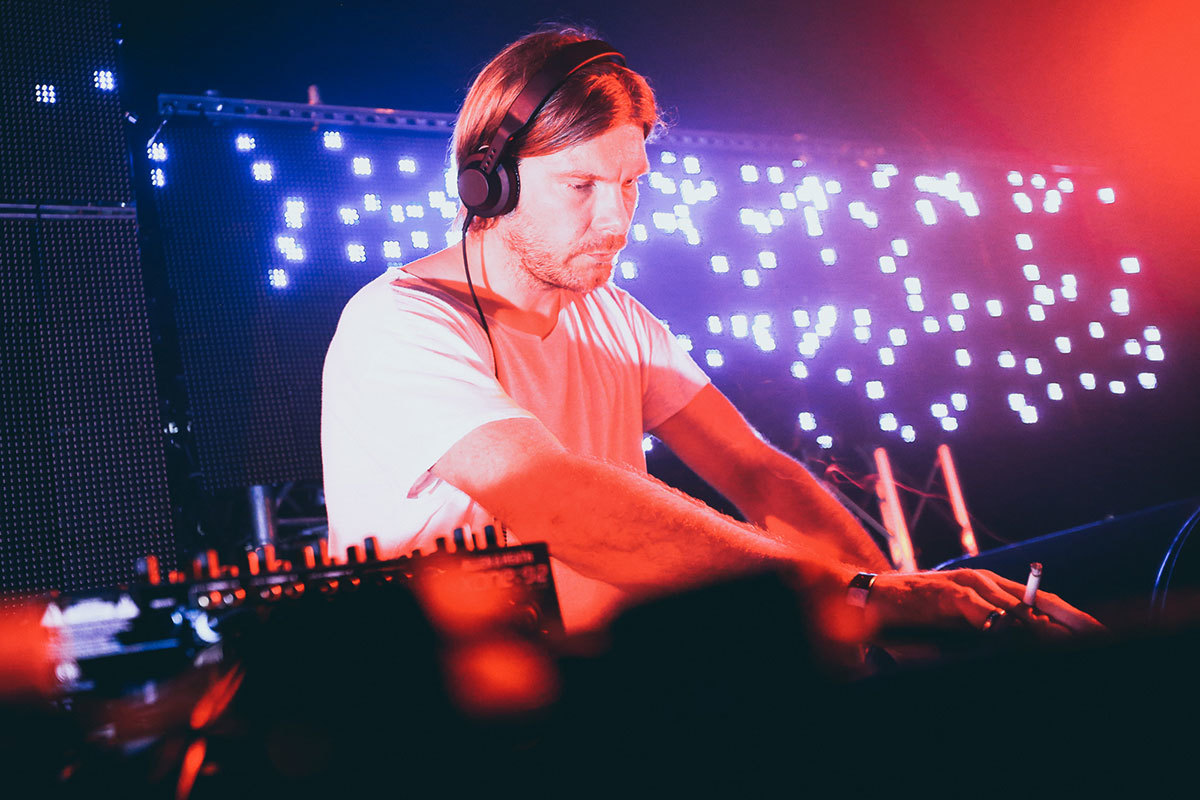 “Heading through the woodland, Marcel Dettmann was playing in Closer, housed in a Berghain-esque building in a grassy clearing. A shorter, smarter-haired Marcel played a fitting lightweight yet variable set with layers that he played around with, thoughtfully constructing a more severe sound through niche tracks like Art Crime’s “Show Interest” and dismantling it again just as precisely. 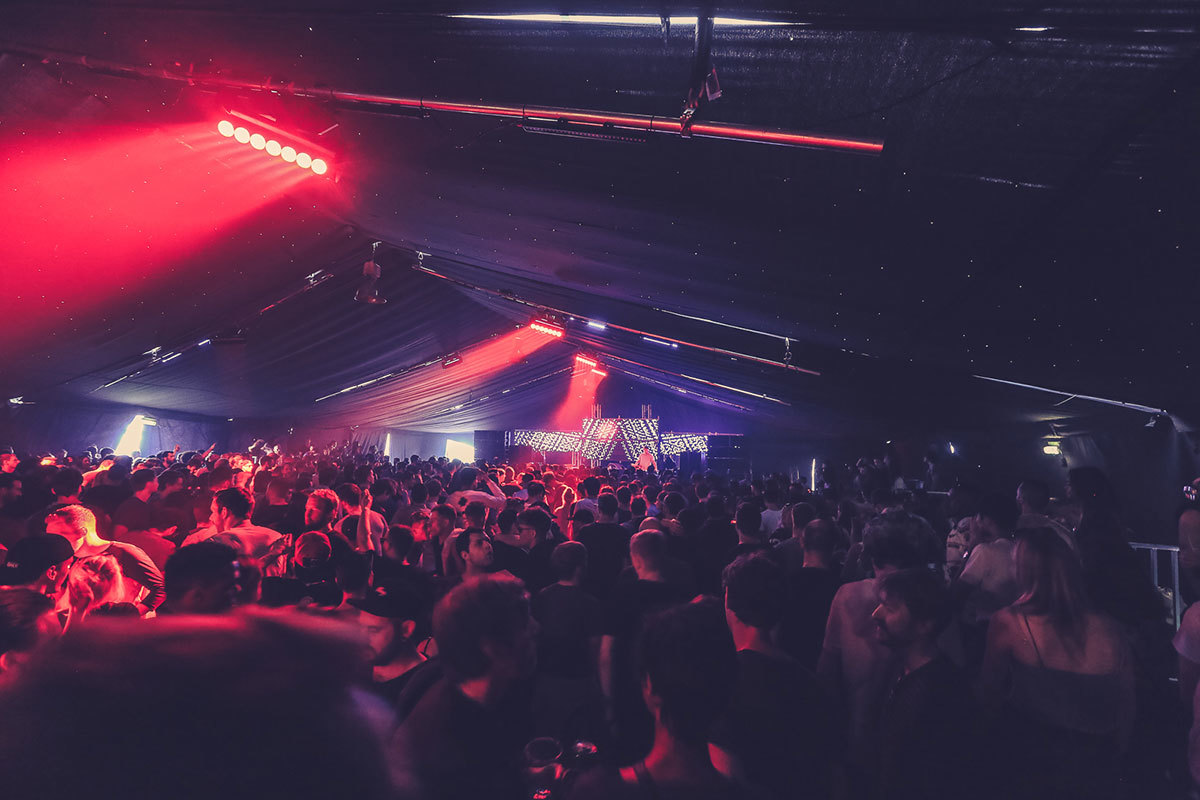 “Alan Fitzpatrick letting loose in fabric’s Room 2 in April had been unforgettable so a beeline for the front of the Drumcode stage was essential. Alan’s beaming presence took over, the crowd engaged from the start as he let rip his signature solid straights of pounding beats with a harmonic synth accompaniment. Tarmo Tammel-Playa Del Sol made the perfect gentler interlude between a pounding warm up, including Alan’s current club pleaser “Love Siren” and his new track “Terra Firma” which ignited fist pumps down the dancefloor corridor. 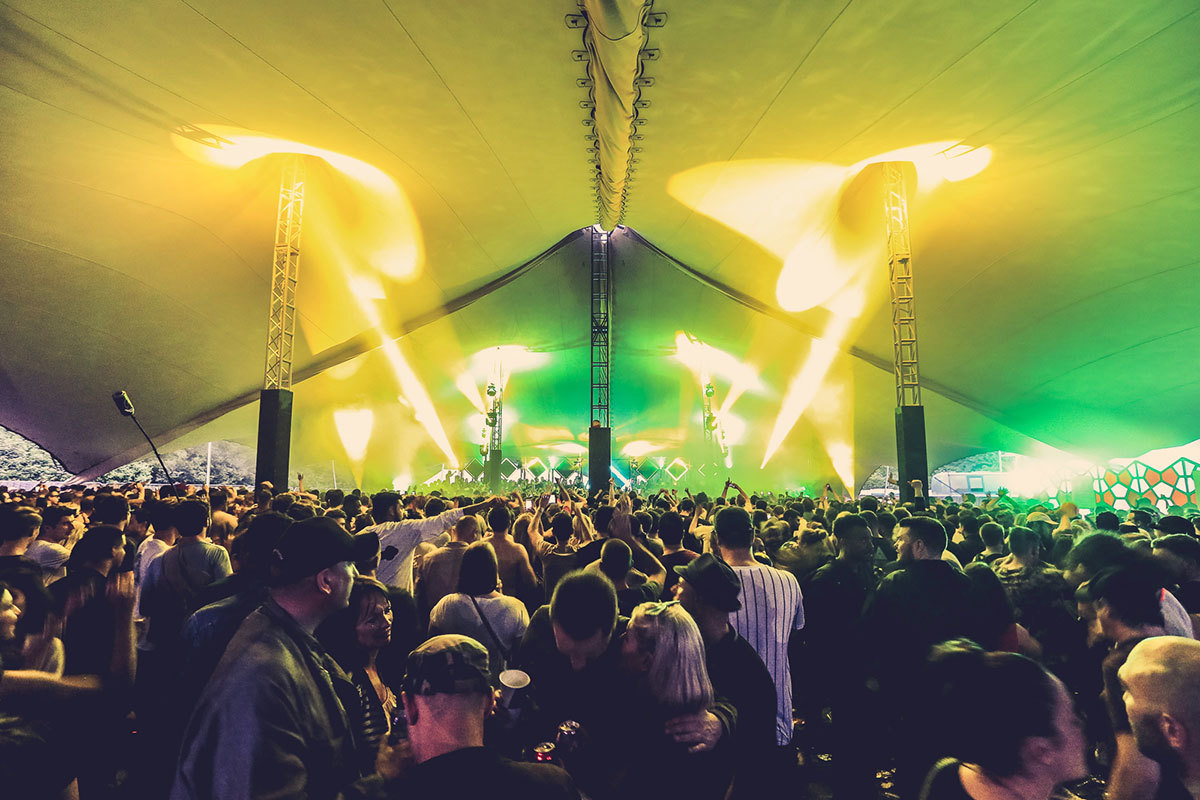 “Back in the tents, Âme was filling out The Hydra’s tent, with a set that switched craftily between melodic and thundering techno. The crowd took delight in the fact that Hydra had erected a podium next to the deck to allow whoever fancied shimmying beside the decks to do so. In Closer, Nina Kraviz was putting her all into an eclectic set, winding stomping techno basslines up with vigour and then dropping hardcore acid, before surprising everyone again, slowing things down and bringing in some hip hop. It could have been catastrophic, but Nina precisely set each track up as she bounced around the decks energetically, ensuring it all flowed impeccably. 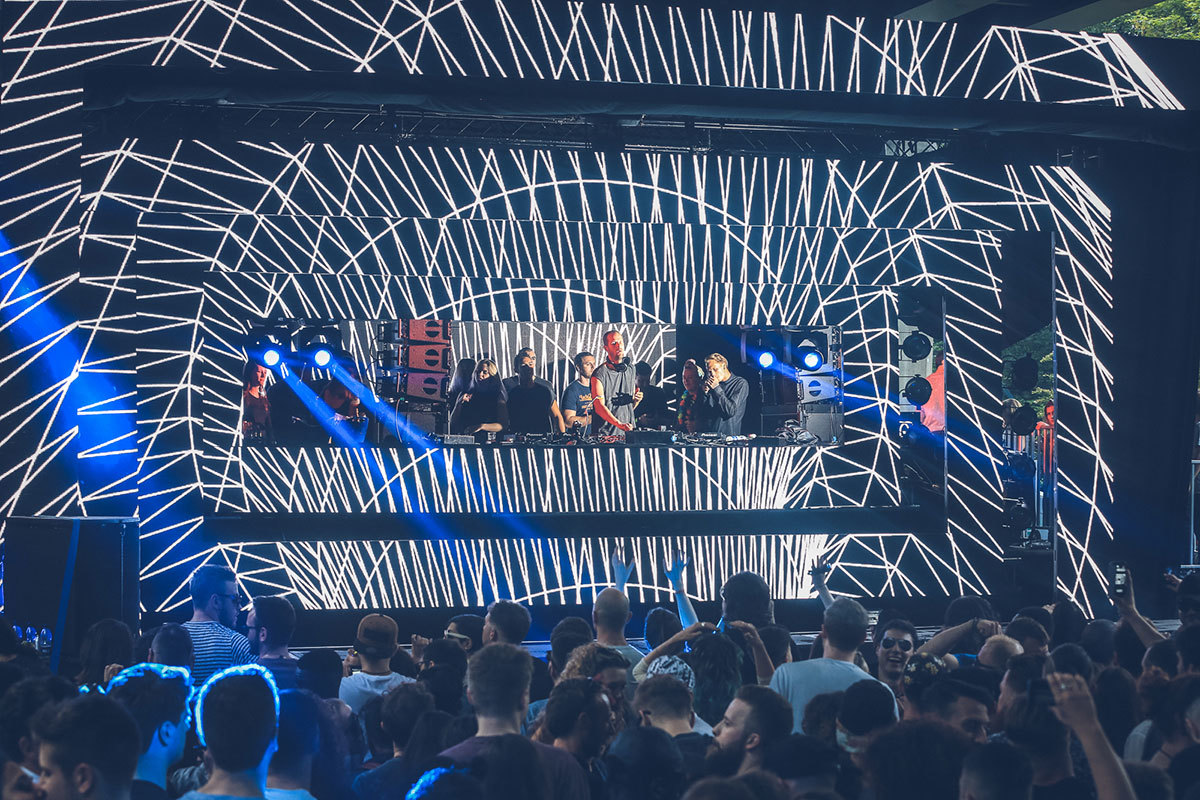 “Drumcode chief, Adam Beyer, ensured an unforgettable conclusion. As ever surrounded by esteemed entourage, Adam used his set to exhibit a lot of Drumcode’s hot new material and included label mates who couldn’t make it along in his track selection; his and Joseph Capriati’s new track “Parallels” making an impact as did tracks from Pig & Dan and Bart Skills. Vibing off the adoring reaction from the crowd, Adam even taking a shot at MC-ing. Fans of Drumcode Radio will be familiar with Adam’s smooth talking and know that, while the concept sounds terrible, it worked. The crowd lapped it up. All in all, this was a really engaging set that ensured Junction 2 shut down with a bang.

“With flawless organisation throughout, a highly satisfied crowd and an exciting new venue, I have no doubts that there will be a repeat next year, and hopefully more to follow. Junction 2 for life.” 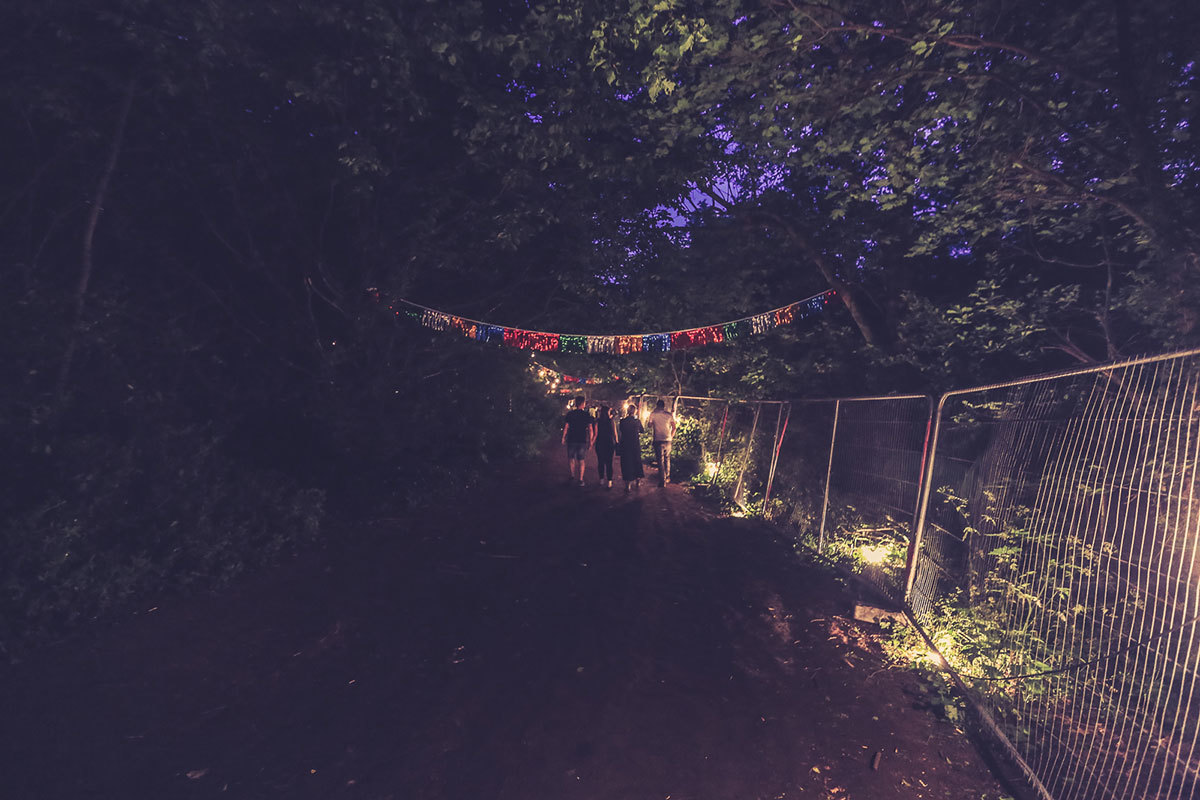 She Said by Ann McManus. Images by Visionseven.