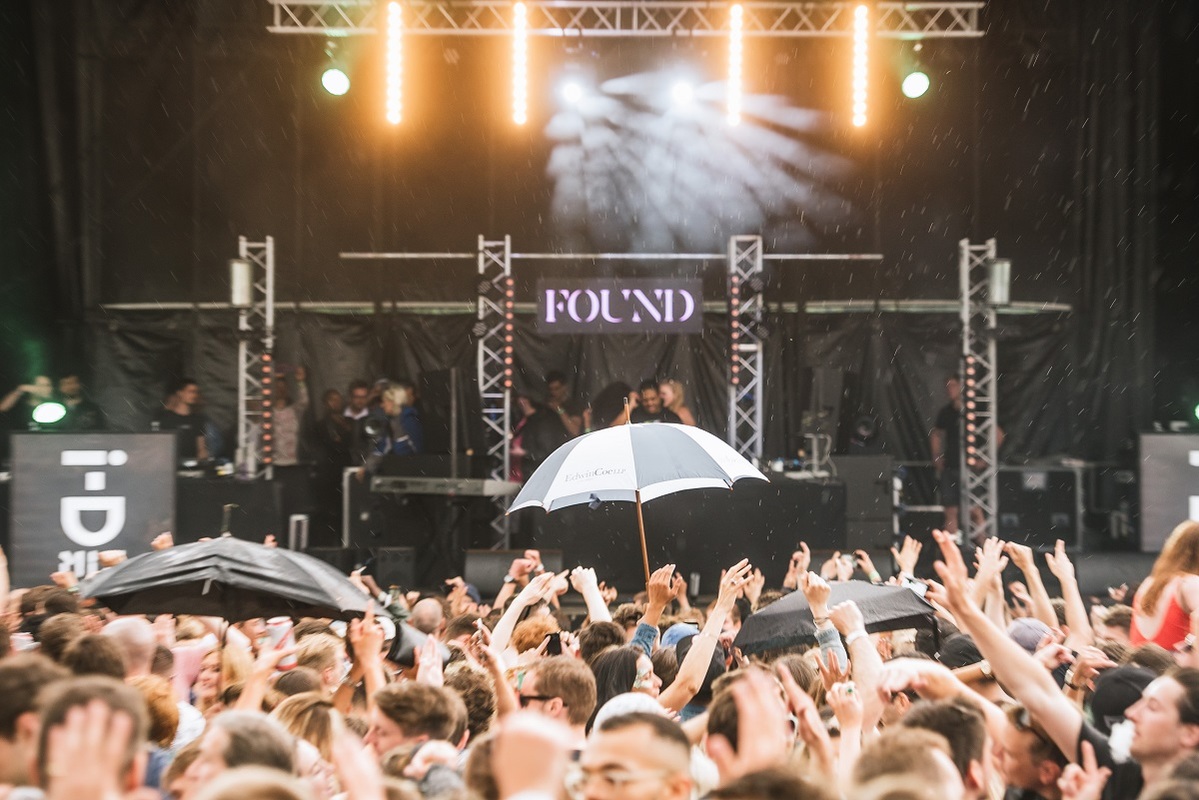 The Found main stage was a vibrant epicentre for house and techno lovers.

He Said: “As has been the theme for festival season so far, the question everyone wanted answering on the morning of Found Festival was when, not if, it would rain - and how hard. No forecasts we could find suggested much more than some light drizzle, and there were hints of sun, so we grabbed our sunglasses and strode to Brockwell Park in buoyant mood. We arrived to find Leon Vynehall on the open air Found main stage mid-set dropping some tangled beats as our group got drinks tokens sorted from a surprisingly sizeable queue given it was just-gone-2pm then headed to the bar. Opting for a tour of the site rather than settle anywhere just yet, we took in the shimmering silver Feelings caravan sat among the central circle of trees in the middle of the festival that was housing Daniel Wang. This mini arena was almost hidden way making for an intimate vibe that encapsulated the atmosphere at Feelings parties in London, though we never made it back to see headliners Mood II Swing or Dream 2 Science in our biggest regret of the day. 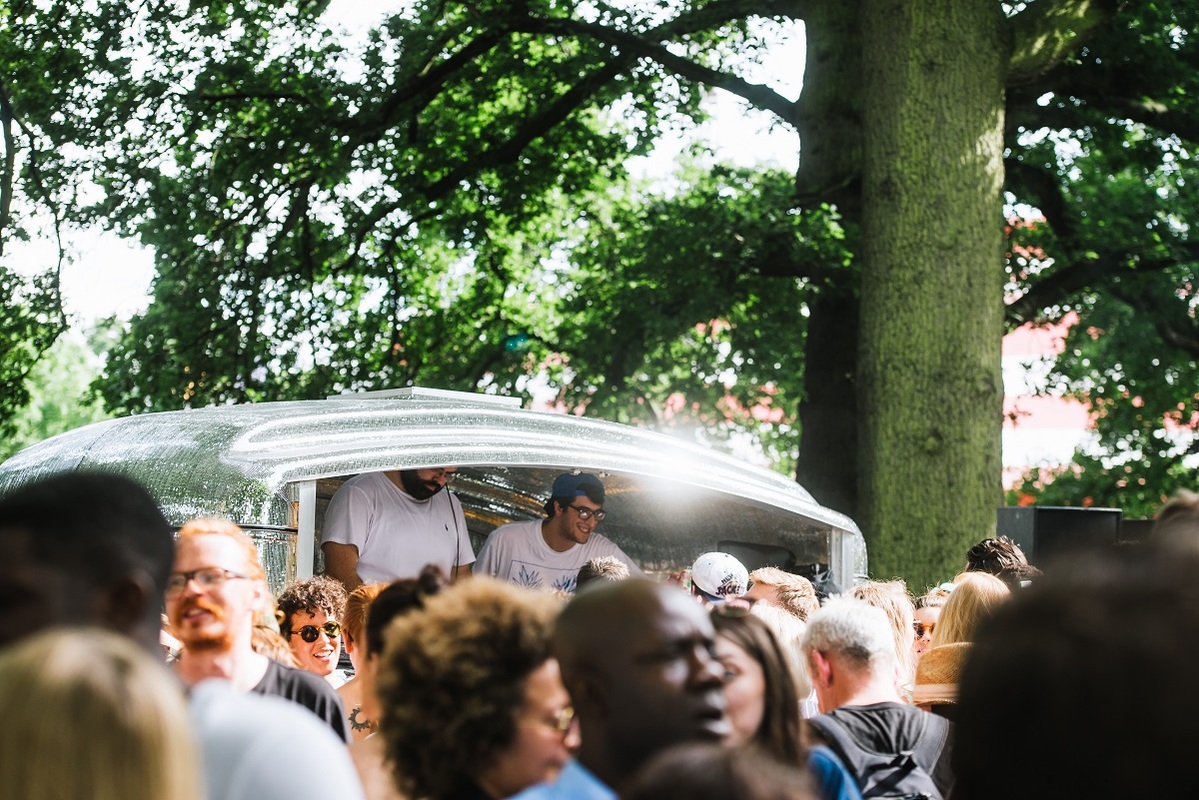 “Continuing our tour, we meandered past the Art of Dark stage where Mara Trax was just getting started and headed into Ron Morelli at the Find Me in the Dark stage. The LIEs boss was struggling a little with the soundsystem due to his intricate house requiring more than just low end to really be heard but before we could make our way down to Secretsundaze for Maurice Fulton, the heavens opened and revellers were running for shelter in the tents. We met a couple of rain victims who had tried to watch Midland on the main stage during the downpour but had to find cover after 10 minutes while applauding those who stayed while we stuck out Morelli’s subdued set. Outside we could see brollies and ponchos passing by, though everyone was in good spirits. 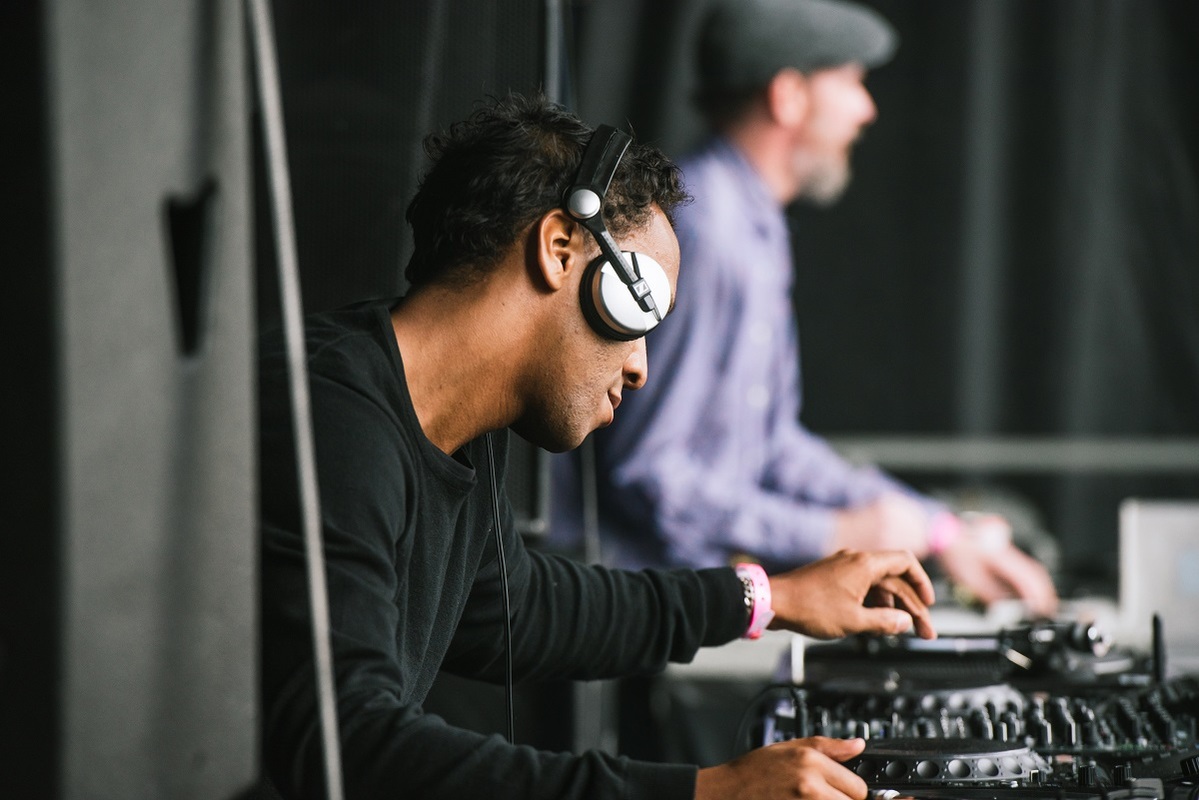 “The rain meant we would see the Zenker Brothers playing to a now-healthy audience, and we were pleased we did because their bass heavy techno resonating far more with the soundsystem and crowd for an injection of pace into the day. Blawan and Surgeon’s live project Trade continued the beefy techno style by adding a more technical element to proceedings, however with the sun in full beam outside the group were keen to step out of the shadows and into its glare down at the main stage where Apollonia’s Dyed Soundorom was spinning the Ibiza pool party friendly house tunes. This was a perfect mid-afternoon set given the weather, and suddenly Found Festival hit its stride. Paranoid London’s live acid on the main stage fed off the response to Dyed’s set with their MC psyching up the crowd, and we loved their grooves which harkened back to the mid 90s acid house scene with their squelchy syncs and driving 4x4 basslines. 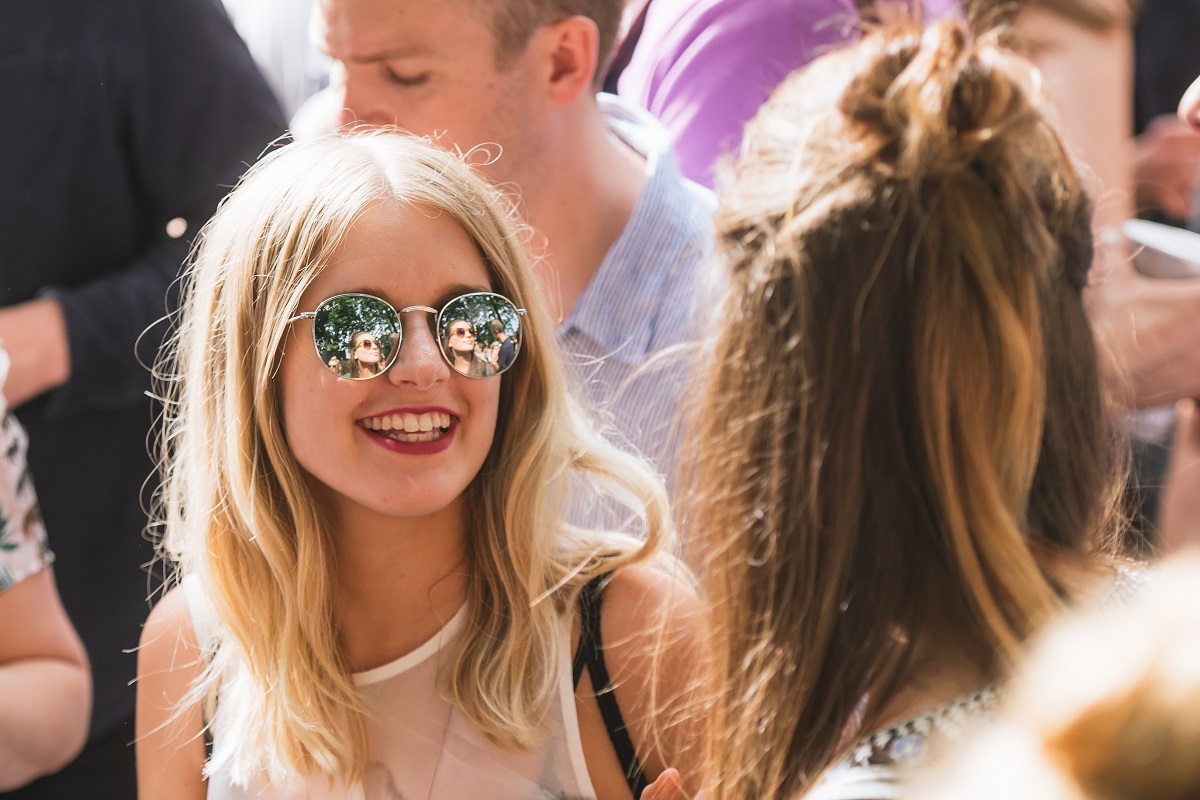 “Derrick May stepped up to the decks next on the main stage, however we decided to seek music elsewhere. Rødhåd had spearheaded a thundering techno in Find Me in the Dark where we would find Stroboscopic Artefacts label boss Lucy in the midst of a storming set ahead of Kassem Mosse laying it deep with a live set. The Corsica Studios clubnight had produced an enticing line-up for forward-thinking techno fans at Found Festival, delivering with aplomb despite an initial challenge in sound quality early on in the day - when we returned for Lucy and Kassem Mosse the tent was pounding. Friends armed with a bottle of wine added to the excitement, and it was smiles all round. When we emerged to head back to the main stage for Chicago house don Kerri Chandler, the rain began to return, but it was only slight - no one seemed to mind and he set up a euphoric finale which united the crowd. 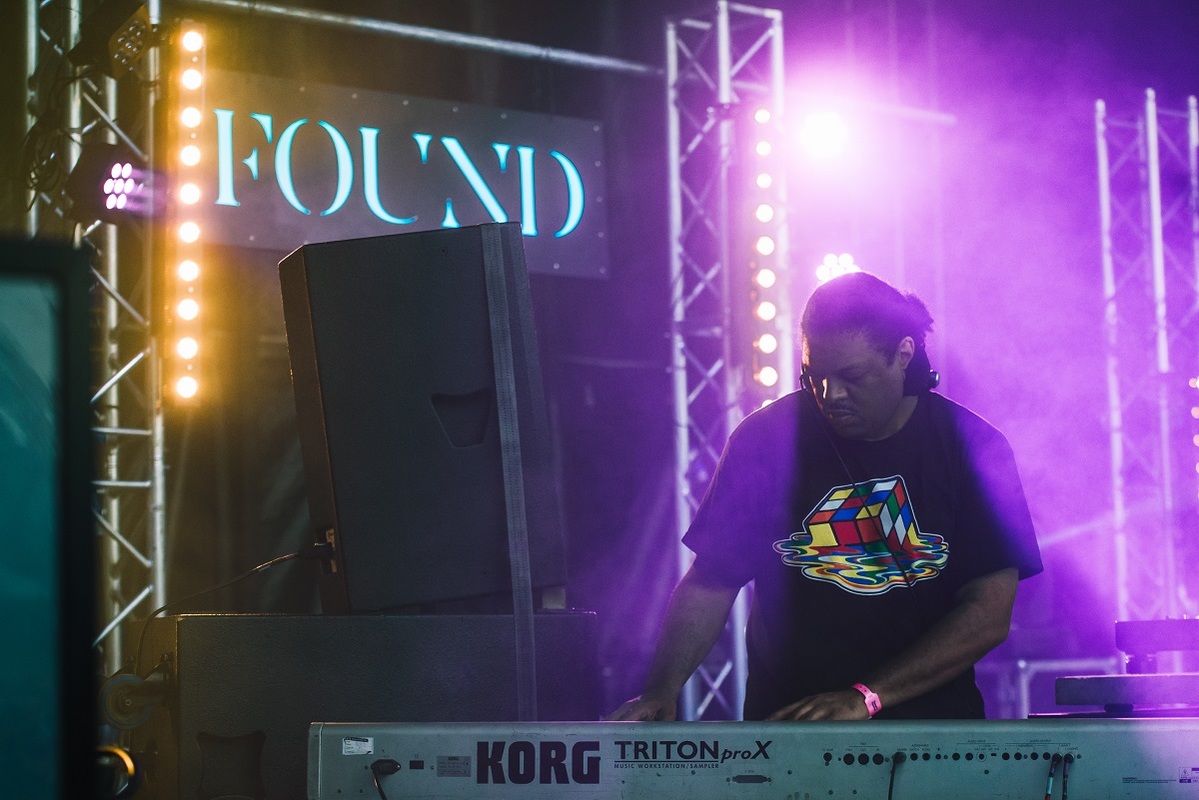 “Chandler, armed on stage with a keyboard to add a live touch to his tunes, dropped a track referencing the rain early in his set which seemed to spur on the delighted outdoor dancefloor, then went on to spin classics “Strings of Life” and “Black Water” to a rapturous response. When he walked out to the front of the stage from behind the decks to say thank you, you felt he had given his all to ensure Found Festival finished on a positive note. There had been obvious issues with queues for drinks tokens, toilets and the bar which will need to be addressed next year, yet the music was spot on all day even if a renewed focus on consistent soundsystems across the site would ensure no talent goes to waste. Overall, it felt this was a step in the right direction for Found Festival in producing only their second event in Brockwell Park, with the Found main stage was a vibrant epicentre for house and techno lovers. 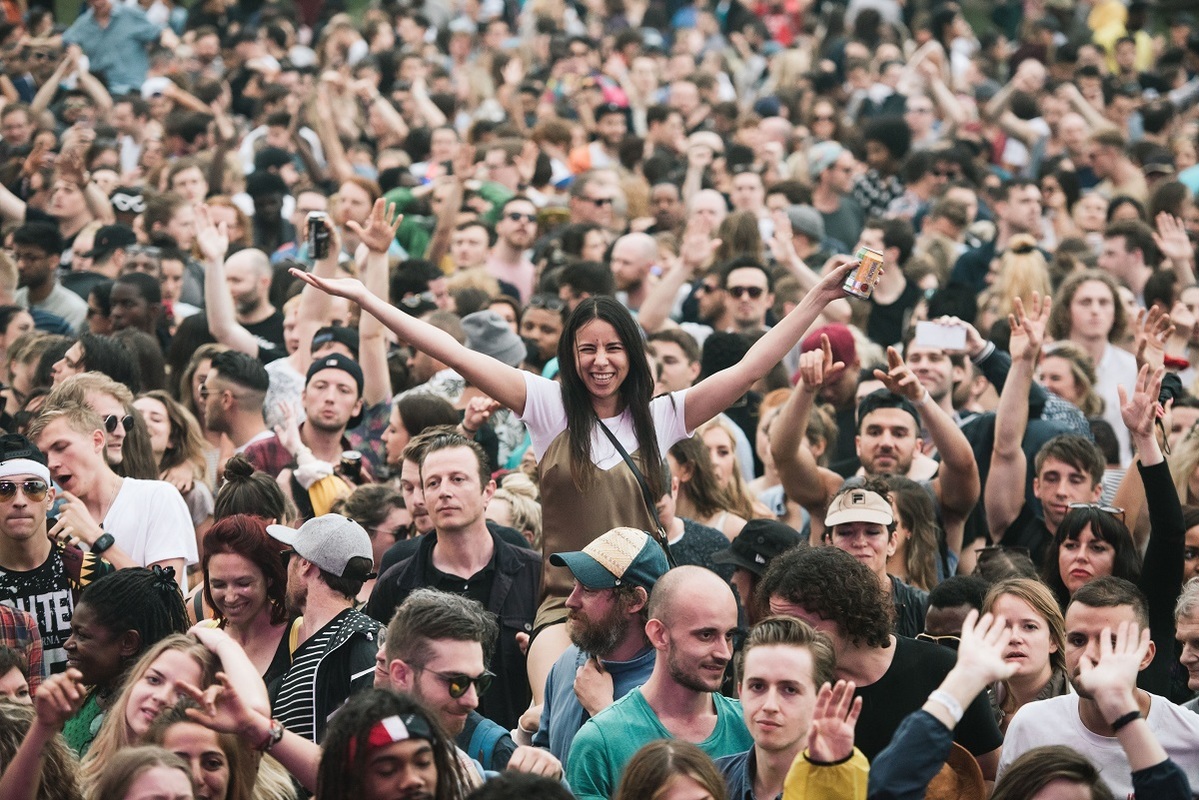 Paranoid London brought the party, hyper as ever.

She Said: “‘Are you coming to Found on Saturday?’ ‘Yes, can’t wait! Don’t actually recognise many of the djs, but last year was fun!’ From this repeated response, it seemed Found had retained their mark as an underground hit in South London. Despite the rainy forecast, Brockwell Park was already full of action as South-side hipsters amassed in front of the main stage for some lightweight shuffling house beats, courtesy of Leon Vynehall. 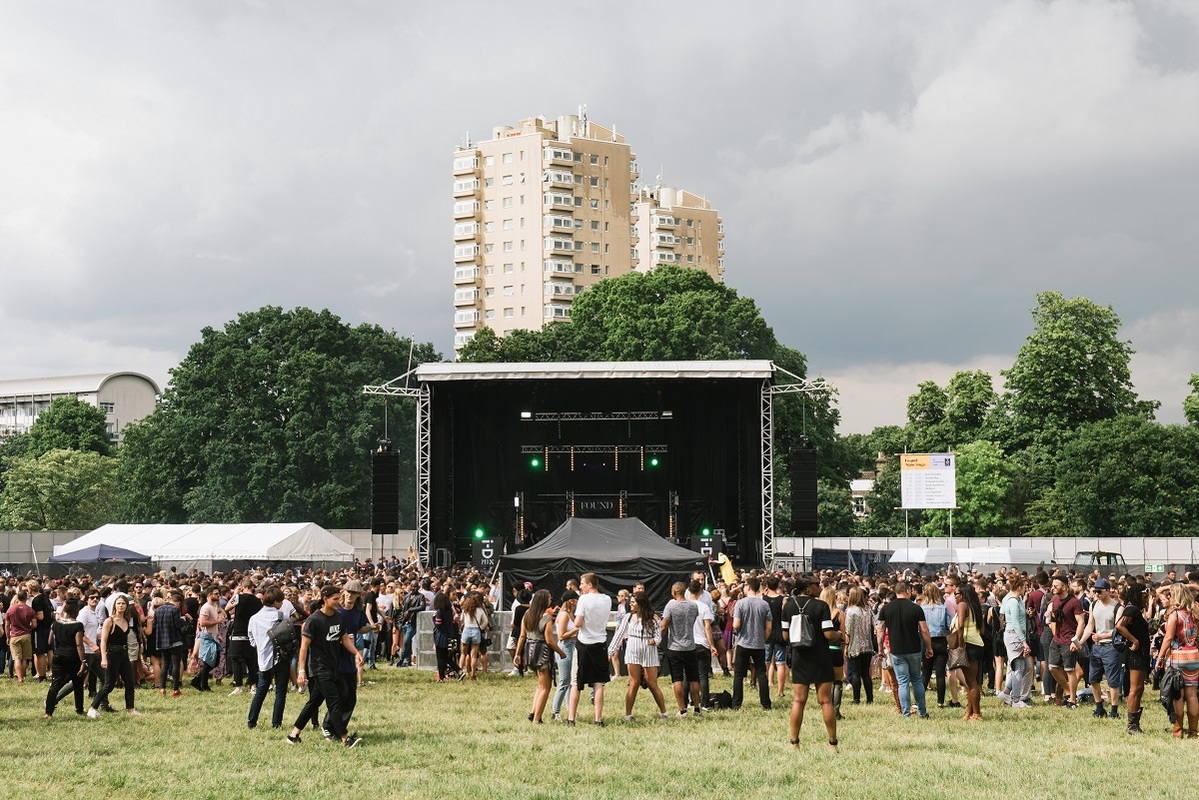 Heading into the wooded area in the centre of the site, a silver camper van hosted by Feelings was parked from which Beautiful Swimmers were belting out full hearted disco as smiley hipsters swayed around gaily. All this joyfulness was a bit much for me, having spent the week absorbed in techno following Junction 2, and I found my solitude in Find Me In the Dark’s acid and techno offering. Here, sheltered from the pouring rain, Ron Morelli was showing the kids how acid is done, before handing over the contrasting Zenker Brothers who played a fast moving set, switching tracks and experimenting with new sounds frequently yet flawlessly. 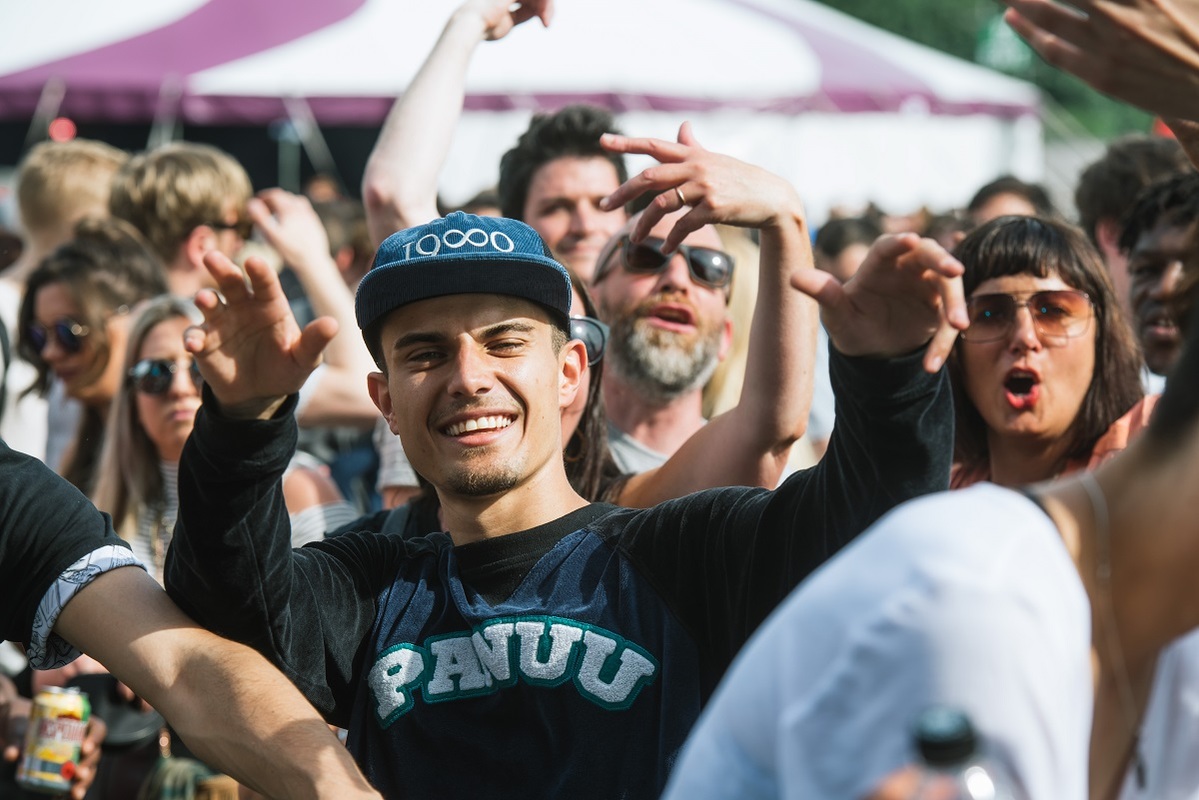 “As the sun came out folks ventured out the tents and back to the main stage for DC10 resident Dyed Soundorom, where the music had picked up a pace and installed a deeper bassline. With the crowd warmed up, Paranoid London brought the party, the duo and their vocalist, Mutado Pintado, all smiles as the took to the stage. Hyper as ever, Mutado asked the crowd they were made of, suggesting they brought whatever that was to the dance floor as Delgado and Whalley installed a thumping bassline. It was a fun and interactive set, creatively using rasps of breath as a beat at one point, with Mutado’s gravelly vocals sexing up the scratchy acid house throughout. 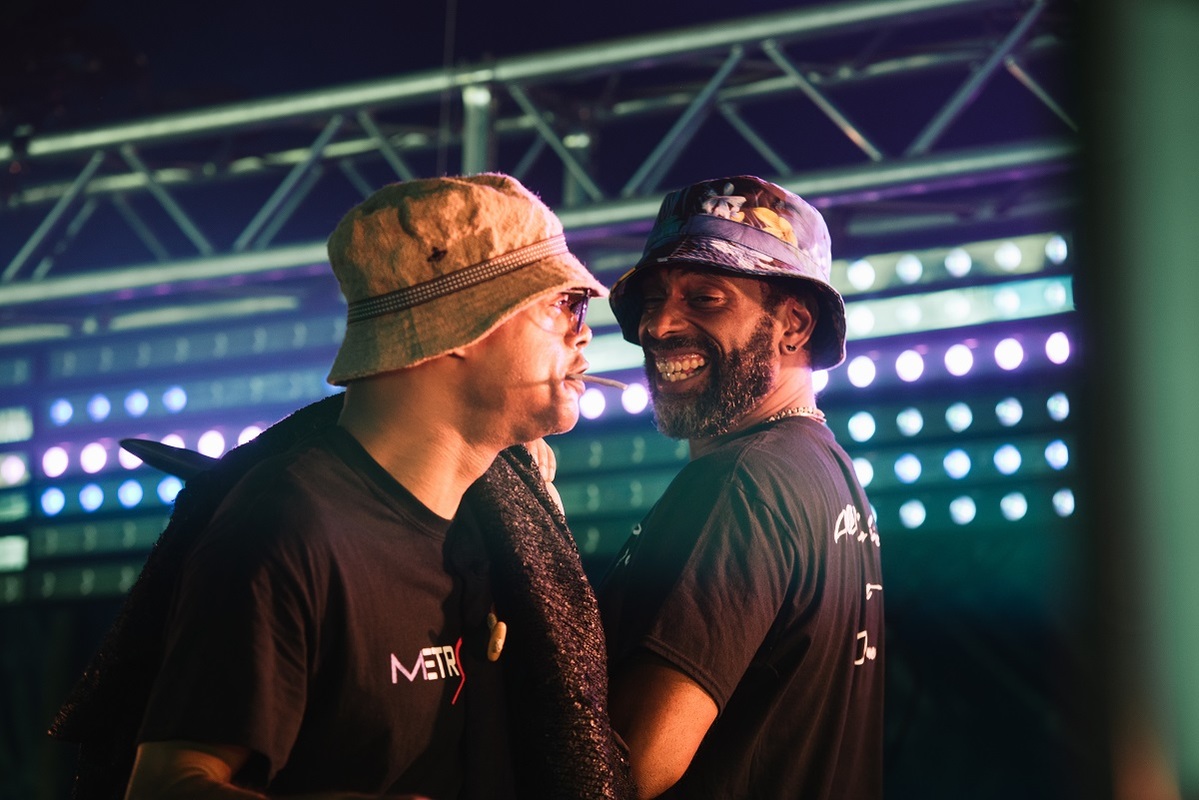 “It was techno time again with Berlin’s Rødhåd spinning out a thudding set with a high bpm and a discerning use of muffled vocals that built illusions of being in a smokey Berlin nightclub. As Rødhåd wound up his set to an applause people turned to make their way out of the Find Me in the Dark tent. They were immediately stopped in their tracks by a harmonic prolonged synth soon followed by a forceful yet funky beat. Lucy conjured the crowd back to stay with a deep dub set that was simplistic yet effective. 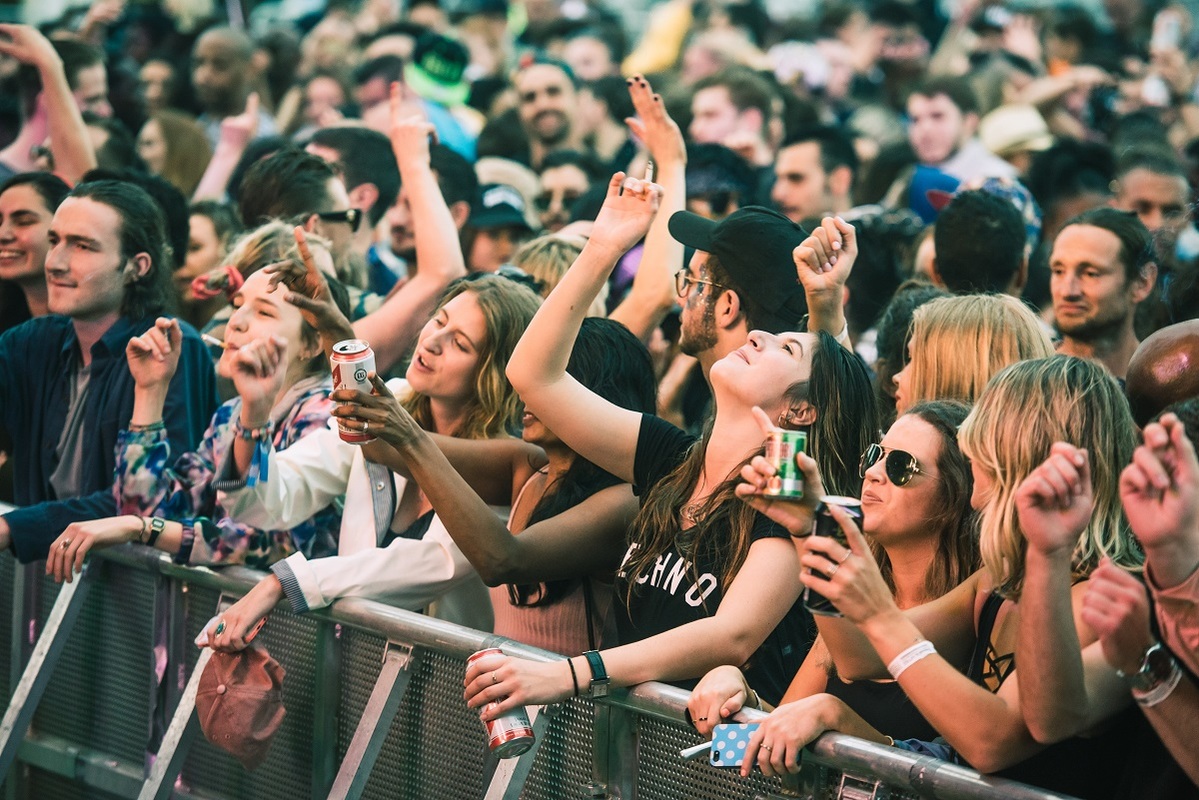 “The sound of a swanky wine bar reverberated in the Secretsundaze tent, with Theo Parrish playing a smooth jazzy house set. It was getting a lot of love from the crowd, but for me, it didn’t fit the scenario. The day wound up with commanding sets from house legends Derrick May and Kerri Chandler. Derrick May played a rhythmic, energetic set introducing a variety of percussive effects. Kerri Chandler followed for the closing set, carrying on the funky house sound for a while before suddenly going tribal. As the rain poured down, the resistant appreciators stood their ground, wrapped up in tropical beats like Octave One – “Blackwater” and the distinctive crowd mover Afefe Iku – “Mirror Dance”. The 9pm finish must have come as a surprise to a lot of people, who expected the usual 10pm curfew, but the upside of this was everyone in a great mood as the park vacated. With such a huge variety of music all day, Found pleased a wide range of people. Regardless of who you know on the line-up, an element of trust in Found has been established with anyone who has been to make it a favourite in the London underground dance music festival scene.” 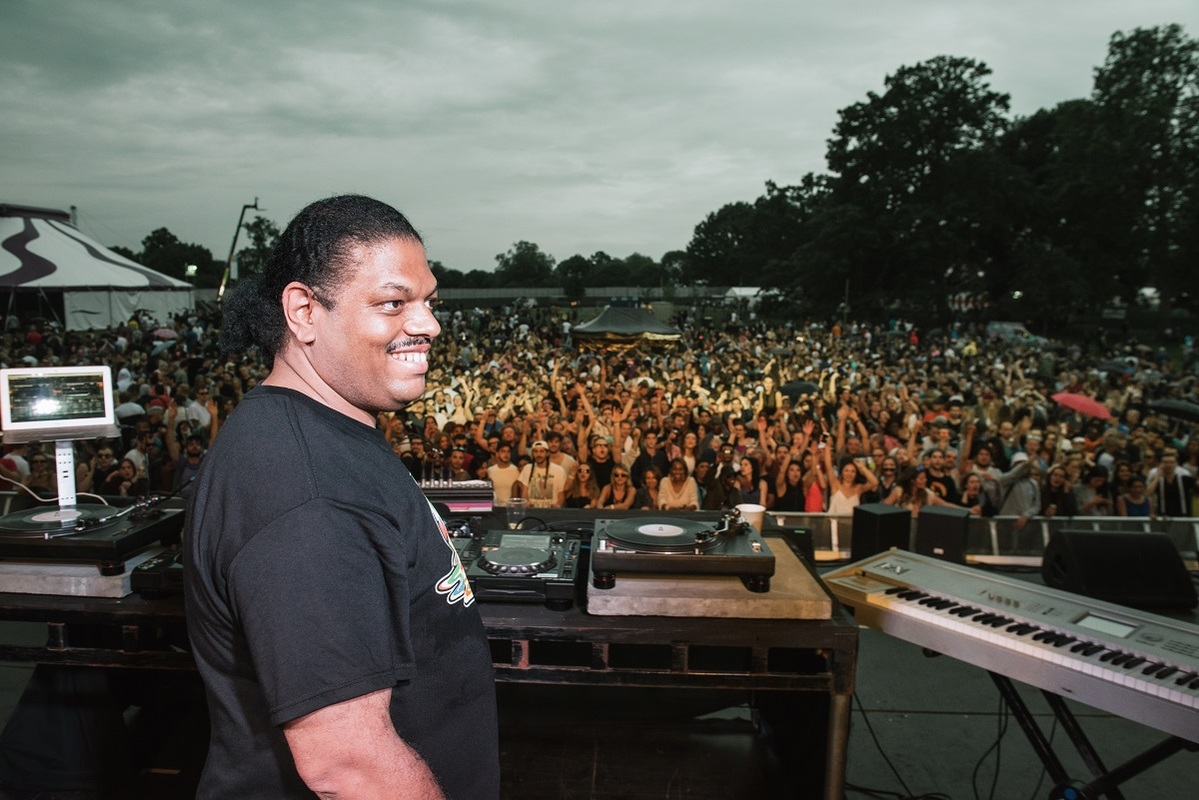