Feelings hosted a Spring Fling at Clapton Round Chapel in London on Saturday, April 4th. The Feelings crew are known for their blend of house and disco by respected DJs, with New York City’s Club Shelter founder and head of A&R at Motown, Timmy Regisford, and Chicago house advocate Tevo Howard of Beautiful Granville Studios joined by The Menendez Brothers, Kasra V and Feelings residents. Mike Barnard and Ann McManus were among the congregation.

Happy faces all round and an atmosphere which made it easy to chat to anyone.

He Said: Feelings know how to pick a space for a party. Having raved al fresco for DJ Alfredo’s balearic Ibiza set last summer by a Hackney canal, they hosted a disco at a strip club – both making for unique settings to accompany their heritage acts behind the decks. Putting their Easter Spring Fling in a church was a masterstroke. Clapton’s Round Chapel made for an ornate setting with it’s flat lower floor providing plenty of space to move around the dancefloor and balcony seating that, though unused, gave an grandiose look. Ample outside space in the ground of the chapel was welcome, with Buffalo Joe’s providing street food to the hungry, making for a great setting for this edition of Feelings.

When we arrived around 4pm, the Feelings residents were warming up with disco vibes. The chapel still needed more revellers to soak up the Funktion One sound – acoustics are always a challenge when the space is to wide with high ceilings – but it was shaping up nicely so we grabbed a bottle of Prosecco from the bar. A steady stream of people filled the room quickly and there was soon a proper dancefloor forming in the centre of the chapel, getting their boogie on to the astute choices of Kasra V. There was a holiday vibe in the air at Feelings, helped along by the two days off work after the party, meaning happy faces all round and an atmosphere which made it easy to chat to anyone.

Guest headliners Timmy Regisford and Tevo Howard both showed their considerable music knowledge with very different sets. Regisford was all about the vocal-led tunes including the classic “Teardrops” by Womack & Womack which had the crowd singing along and was evidence of his Mototown connections. Howard went for a straight-up Chicago house vibe which lacked the same spark as Regisford, but may have been to glitchy sound affecting the bass. A minor gripe, however, as when people poured out of the chapel at close, there was an end-of-the-clubnight mood normally felt some time into the early hours rather than the 11pm it was, though many would go on to the afterparty. Feelings continue to impress with their fun and inventive locations for parties, I’m looking forward to their next outing. 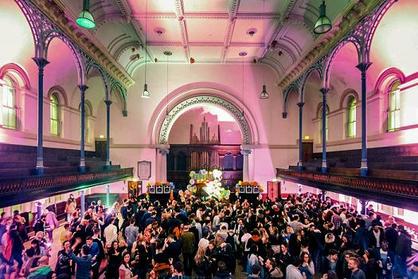 The all-dayer made me feel a great deal better for abandoning all sense of religion and traditional values for a weekend of clubbing.

She Said: The last Feelings party I’d been to was a nod to the Balearics; a fantastic day of drinking punch out of coconuts at a colourfully-decorated Shapes in Hackney basking in late August sun. The crowd had been a well-rounded bunch of people who had obviously put time and thought into their appearance, yet not so much that they would be phased if no-one bought into their tiger print shirt as the next new thing. I had been slightly concerned about how loud the music was and had ended up putting my headphones into my ears for a few hours.

Returning for 2015’s first Feelings party, their church all-dayer on Easter weekend made me feel a great deal better for having abandoned all sense of religion and traditional values for a weekend of clubbing. The venue had been expertly selected. The Round Chapel Centre for the Performing Arts is a huge reformed church in Clapton allowing revellers plenty of room to dance and, should they fancy it, chill out on the upper pews with a birds-eye view of the party below.

As with the last Feelings Balearic party, the crowd was a laid back, well-presented bunch here for a day of enjoying a line up including the forever-smiling duo The Menendez Brothers, Timmy Regisford and Tevo Howard. The acoustics in the venue lent themselves to the happy house that had everyone dancing from the start (which, given all the space, the and makeshift bar, was reminiscent of a high school disco) to the hall filling up and groups dancing around one another introducing their new friends to their old friends. The night ended with everyone refusing to leave the hall as numbers were swapped and group pictures taken, marking the end of a special day for all involved.