Spanish fiesta Feria de Abril swapped Seville for London as Elrow took over North Greenwich’s Studio 338 on Sunday, July 31st. With the club boasting an outdoor beach with real sand along with a heightened roof over the club’s famous terrace, Elrow brought their mix of inflatables, confetti and stilt-wearing performers for a sold out day party soundtracked by a house and techno line-up that stayed secret until doors opened. Mike Barnard and Ann McManus got involved in the Seville Fair themed day. 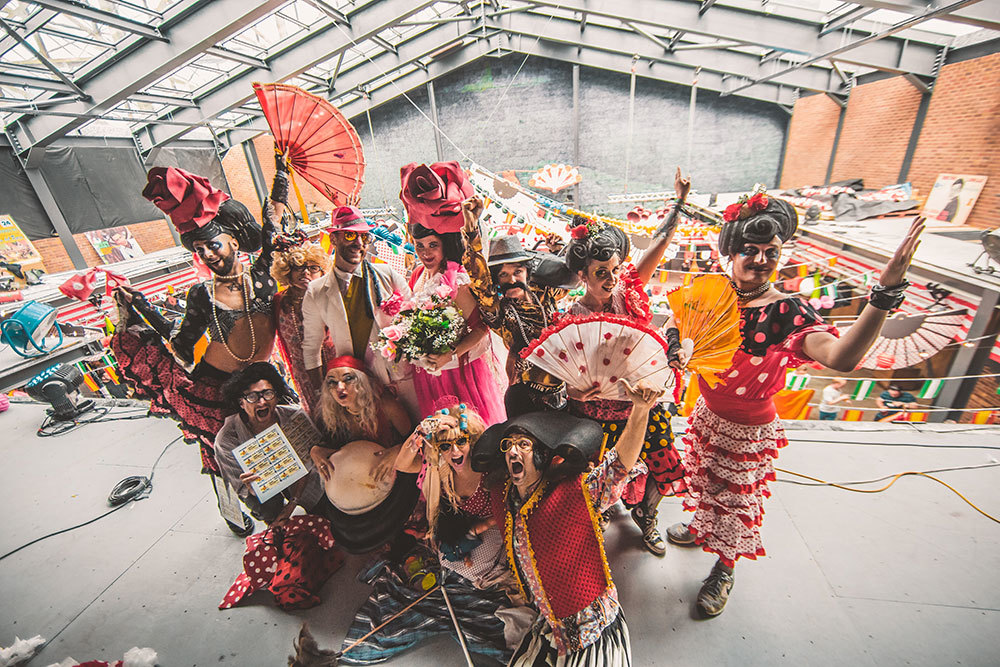 Somehow the spraying of confetti never gets old.

He Said: “The 12noon on a Sunday start may have caught the London Elrow faithful off guard slightly as queues snaked round the corner and down the road from Studio 338 at 3pm but this may also have been down to the efforts of the revellers to get into the spirit. Sequins, shades and tanned skin were everywhere as the ladies opted for a less-is-more approach for a summer rave up while the guys had carefully sculpted haircuts, Hawaiian shirts and shorts - these looks took time to prepare. Once inside, the terrace was already rocking to the sounds of the Menendez Brothers as stilted performers dressed as bulls, matadors and their adoring female fans made their way to the middle of the dancefloor inciting whoops and cheers at every drop. It wasn’t long before we got our first blast of confetti either when a remix of Audion vs Tiga’s ‘Let’s Go Dancing’ dropped to mass hysteria as red and white filled the air. Somehow the spraying of confetti never gets old. 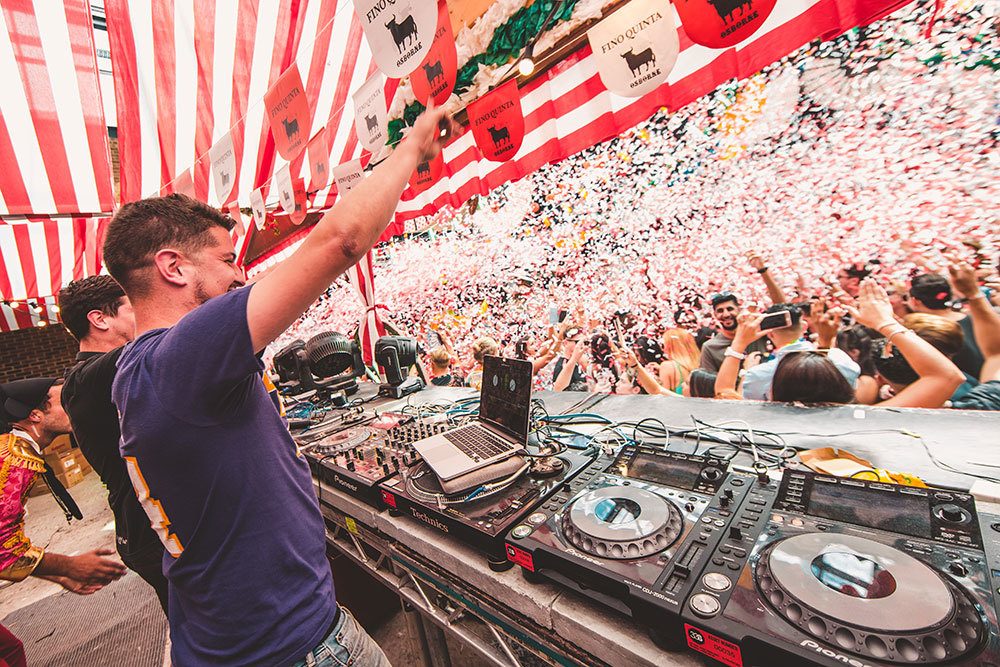 “The terrace was decked out like a street party with a typically-Elrow-esque bizarre scene of performers stepping out dressed as tapas. The heightened roof with a balcony overlooking the dancefloor made it easier for the Elrow helpers to distribute their inflatables from above and they were brandished like trophies by many who seemed intent on building up a collection to take home - one eager scavenger was clinging to two crocodile lilos and a rubber ring as she tried to navigate the main room crowd. We decided to take a break outside in the sun as Skream got prepared behind the decks, and found ourselves amused by the antics on the beach for hours. 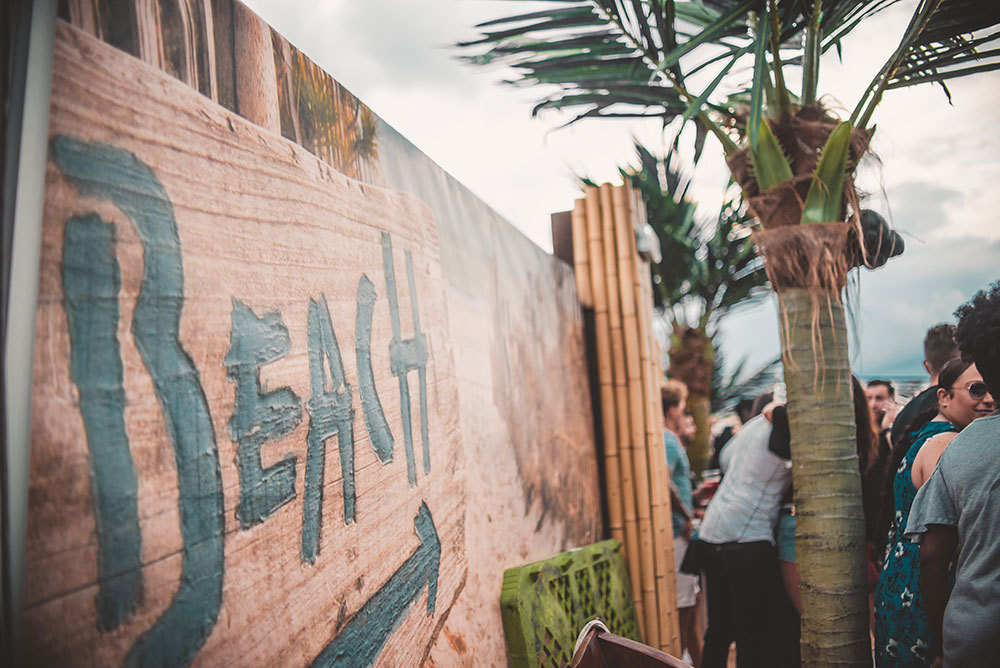 “Studio 338’s installation of real sand across its large ‘garden’ space is new this summer and once we’d scythed through the initial blockage of people inexplicably standing just a few metres away from the doors outside, emerged into a second Elrow-decked dancefloor. Spanish and, for some reason, Nigerian flag-themed bunting was strewn overhead while the bars were decorated like market stalls. Jasper James was in the decks dropping stripped back sunshine techno such as Luciano’s remix of Argy’s ‘Love Dose’ and the Charles Ramierez, Luca M and JUST2 tune ‘Up & Down’. Confetti was just as present here as inside, though alfresco it didn’t quite have the same crowd-covering effect.

“Looking around the bars were full, however we’d been handed tapas and ‘traditional Spanish drink’ vouchers on entry so decided to take advantage of the offer. We found a white-wine based drink being handed out by the cup full out of a silver punch bowl which quickly (but unsurprisingly) ran out while the tapas was a tasty mix of sausage, cheese, pickled green chilli peppers, gherkins and mini baguettes that went strong all day. We got our fill and turned our attention back to the music, The 2 Bears dropping Audion’s ‘Mouth to Mouth’ sending the barefoot Spanish contingent next to us into a frenzy on the sand. They were perhaps the happiest of the Elrow lot as they limboed and generally encouraged everyone to smile as much as them. 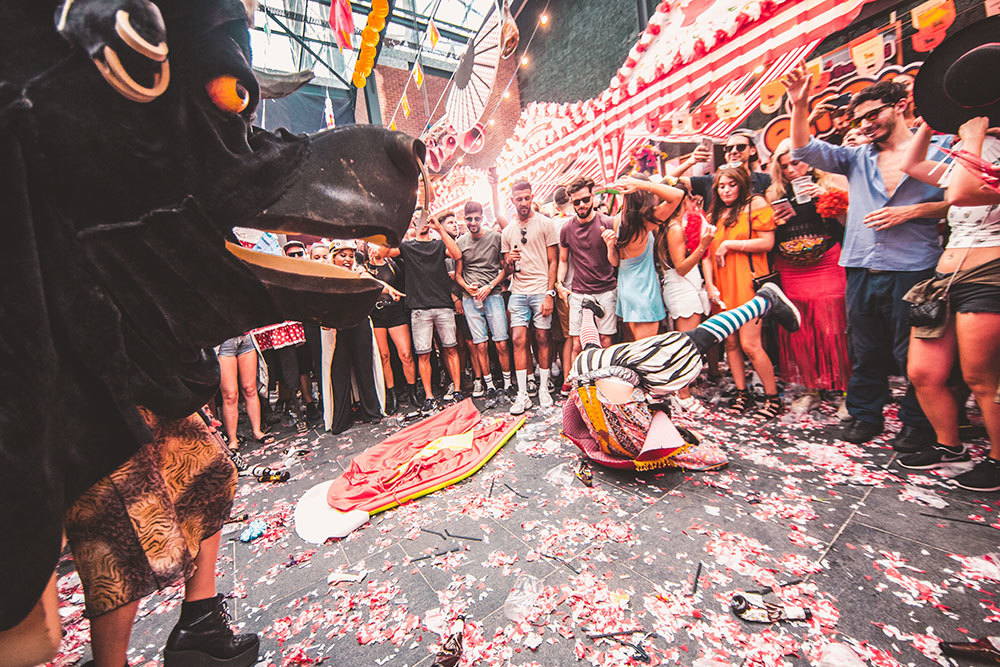 “The Elrow crowd were an amusing bunch to watch, and were fully loving every minute. There were some impressive outfits - both outlandish and daring - while the sunshine occasionally breaking through the clouds capped off the early evening. When we finally returned indoors it was the perfect moment when Andre Campo started mixing in trance classic ‘Cafe del Mar’ by Energy 52 which it took everyone a while to recognise, yet when the famous drop came the crowd went wild - the only thing missing was a confetti explosion. We took our leave sure that moment could not be bettered, but the Elrow faithful had an afterparty at nearby Roka to see through the night and, hopefully, Monday off work to empty the mix of confetti and sand out of their shoes.”

She Said: “Choosing Fiera di Abril as the theme, the Sevillian festival celebrating the beginning of spring, Elrow hosted a true-to-form sensual explosive Sunday day party. In August. On a fake beach in London.

“Is Seville anywhere near a beach?

“But what did that matter, the crowd here weren’t here for a factual representation of the theme. They were here to indulge in the nonsense and lose their minds to the madness that Elrow promised. 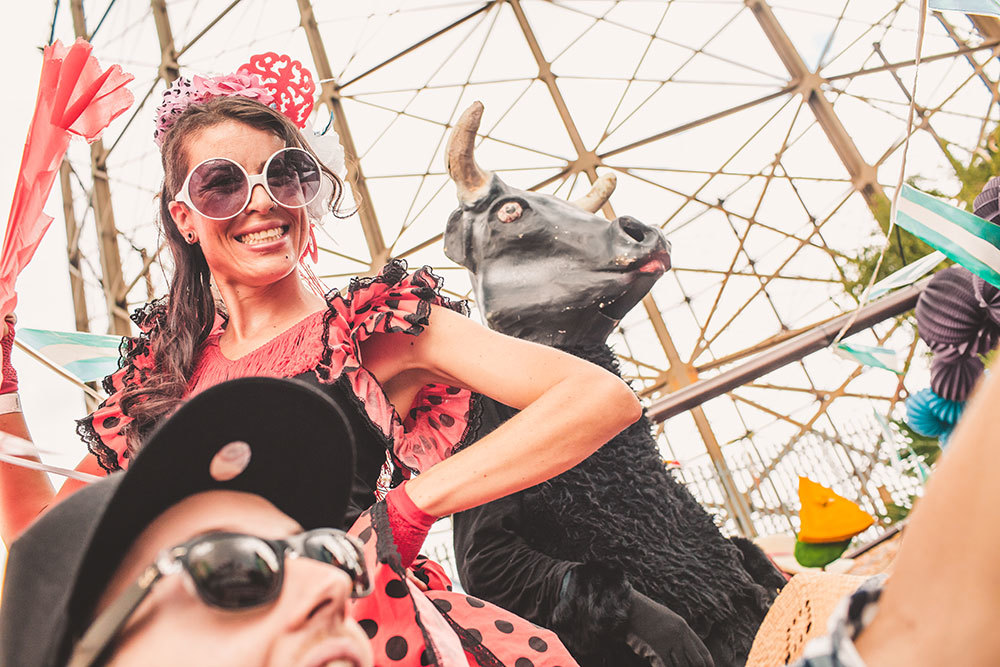 “Navigating our way through the longest queue I’ve ever seen, a man walking a fluffy purple toy dog on a leash strolled past. At the entrance, beautifully well-made-up ladies dressed in shiny opera dresses greeted us warmly and handed us tokens for tapas and Spanish drinks. The Menendez Brothers were sending the already buzzing crowd nuts in the sun-streamed Terrace. Eats Everything feat Tiga vs Audion - “All Night Dancing” struck a particular chord with one group, who started bouncing so hard I wondered if the lads might start some sort of electro-mosh pit. Luckily before the excitement turned to anything more severe, a canon load of red and white confetti shot out onto the crowd and everyone looked cheery again. The fun continued, with a troop of entertainers on stilts danced their way to the centre of the dancefloor dressed as flamenco dancers, matadors, a silver shark, a bull and some tapas. Yes, tapas! 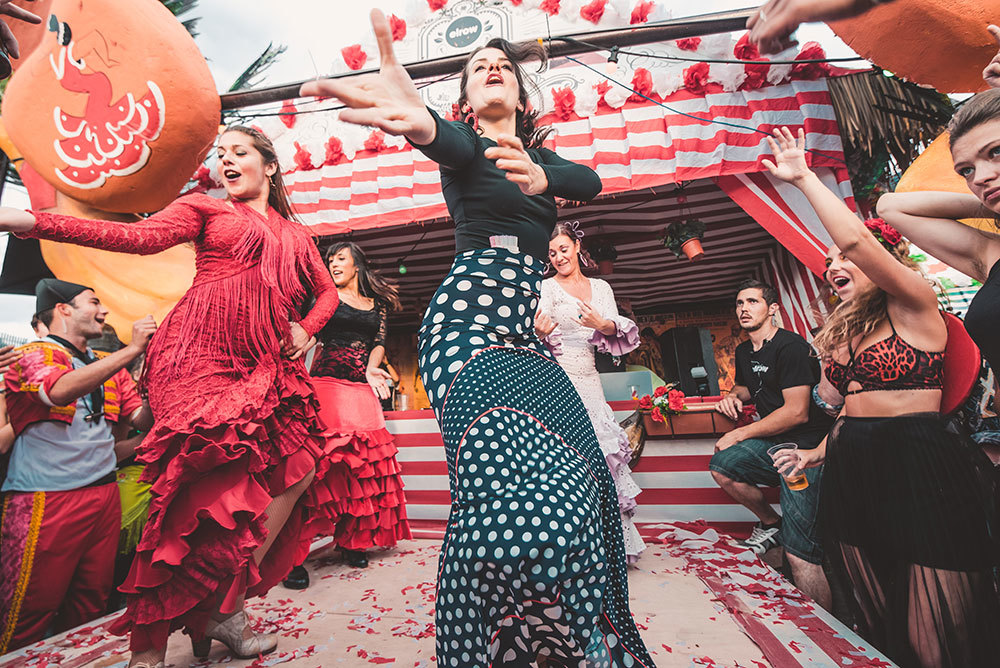 “Moving out to the beach, we found a large sandy outdoor enclosure surrounded by sofas, loungers and various bars and food vendors. It was extremely civilised, with folks munching on plates of tapas with melodic house courtesy of Phonox’s resident DJ, Jasper James. With the diverse guest editions at Phonox, Jasper has won acclaim as an electronic music chameleon, able to mix with great variety. Managing to create a Spanish vibe amongst a catchy beat, this shone through. 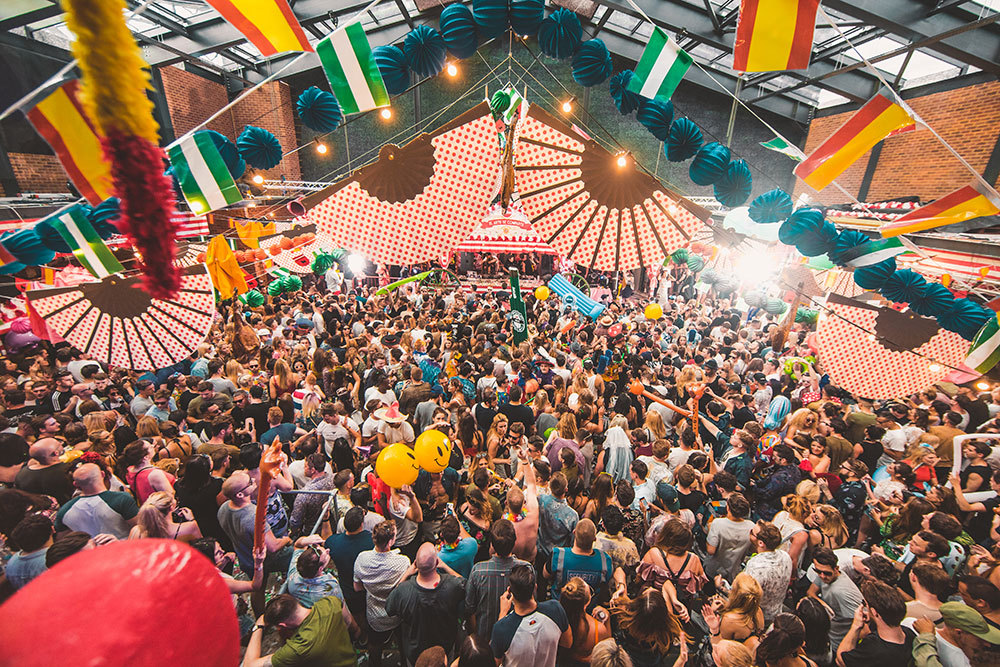 “Cashing in my tapas vouchers, I pondered at the rarity of getting a free meal with your club ticket. Great deal! The gents behind the counter had a tough job slicing cheese and carving the jamon as a crowd amassed, but it was a nice touch, making the day feel more like a cultural day out than just a day party. The 2 Bears followed Jasper James on the Beach, moving the music mood a lot darker and bassier with a more “DC10” sound. 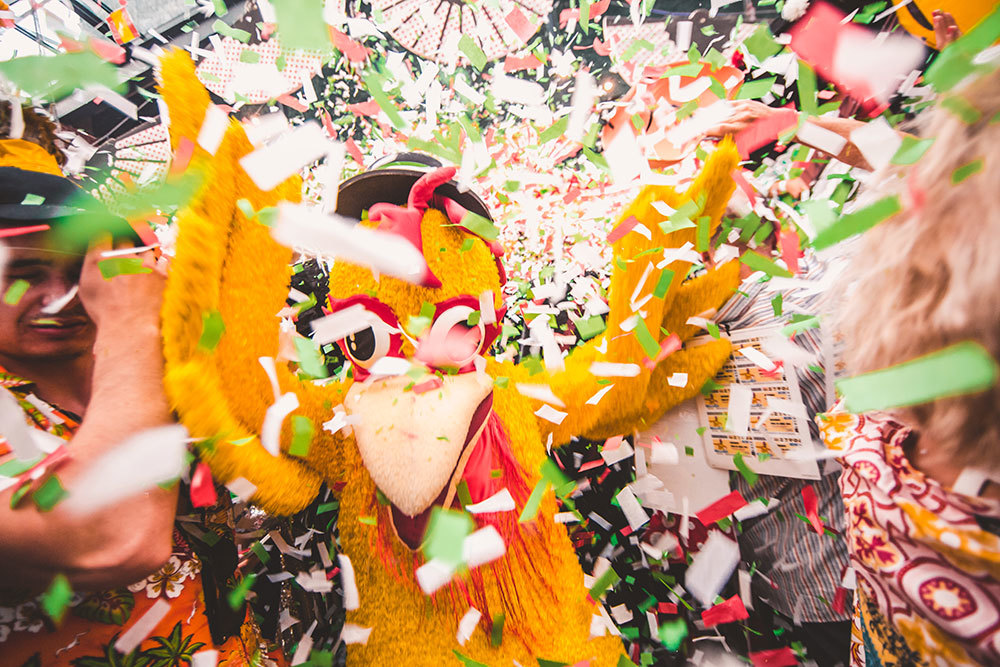 “Moving back to the terrace where Andres Campo was spinning, the mood was even more intense, the evening sun lighting the whole space with an dusky orange tinge. Everyone seemed to be having a blast and inflatable toys were still being thrown down to the crowd from the top deck for endless thrills as everyone’s secret quest to catch an inflatable monkey continued, a bit like a clubland Pokemon Go. Energy 52’s ‘Cafe del Mar’ dropped and I couldn’t help but break into a massive grin as everyone’s happy memories of Cafe Mambo sunsets came flooding back and no-one could decide whether to dance or break into hugs. It was a lovely way to end a vaguely cultural day out.”

She Said by Ann McManus. Images by Khris Cowley.