Underdrome World Premiere at The Roundhouse

!(feature_l)http://relayer.s3.amazonaws.com/articles/spreads/4c964a67c1531723a0000c76.jpg!Dance, music and video art will collide in a thrilling 360 degree assault on the senses called Underdrome. London’s Roundhouse plays host to a contemporary dance show put together by its artist-in-residence Darren Johnston, a choreographer, performer and sound/video artist whose innovative productions have won him recognition and awards across Europe. His fusion of media and live performance centred on a live mix by Zan Lyons is set to be a highlight of the second May Bank Holiday Weekend.

Underdrome has been created specially for Camden’s historic Roundhouse in response to its architecture and heritage, using its circular shape as a focal point for the performance. Some 30 dancers and a 100-strong choir will join forces as the support for artists at the forefront of their field: visual artist/animator Michael England, set designers Gideon Burger and Block 9 and an integrated soundtrack mixed live by Zan Lyons. Lyons, a self-taught violinist and Warp Records/Beggars Banquet electronic artist, will juxtapose classic material from Warp Records artists such as Aphex Twin, Squarepusher, Autechre, Leila and Harmonic 313, alongside other electronic musicians — Vladislav Delay, Murcof and Seaming — and specially commissioned new pieces.

The choreography will change each night and Zan will alter his score in response to the dancers, and vice versa, in a symbiotic process.

The choreography will change each night and Zan will alter his score in response to the dancers, and vice versa, in a symbiotic process. Zan’s music has been described as ‘ambient-hardcore’ — a potent mixture of sadistic break beats, creaky violins, vampiric landscapes and distorted jungle rhythms. The soundtrack has been devised and performed in collaboration with the London Contemporary Orchestra and Zan will also be mixing his own films live. 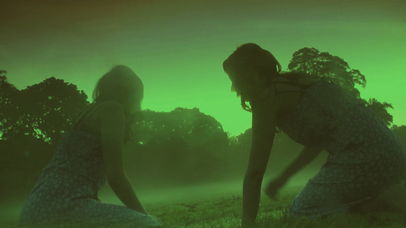 Underdrome is the brainchild of Darren Johnston, who spent his formative years in the subculture of electronic music fired his passion to fuse alternative live performance with visual and sonic arts. However, having won a scholarship to Laban, where he studied for three years, dance has always been at the forefront of his work. In 1999 he received Laban’s award for outstanding choreographic achievement. The following year he won first prize at the International Choreographen Concours in Holland and the first international choreography competition in Borenam, Belgium. And in 2001 he won the Bonnie Bird Choreography Award.

Some 30 dancers and a 100-strong choir will join forces as the support for artists at the forefront of their field.

In 2003 he created, directed and performed in Silicon Sensorium at the South Bank Centre, which featured an original sound score by Squarepusher. At the 2005 Edinburgh Festival, Ren-sa offered audiences a blacked-out bus ride around the Edinburgh docks, before plunging them deep into a dark Japanese performance world. The same year, his ongoing relationship with Warp Records led him to choreograph the Aphex Twin/Chris Cunningham gig at the Traffic Festival, Turin. And in 2006 he collaborated with Jamie Lidell for the Brighton Dome Warp Moves show.

In addition to Underdrome, Darren’s created Ousia, a unique work that blends innovative projection technology with Victorian illusion and takes his dynamic union of choreography, film-making and visual design to the next level. Ousia is a free installation in the The Dorfman Hub, beneath the Main Space in the Roundhouse.

Underdrome receives its world premiere run at The Roundhouse, Chalk Farm Road, London from Friday, May 22nd to Sunday, May 24th.