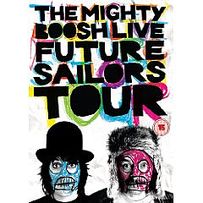 Translating the surrealist humour of Noel Fielding and Julian Barratt from a small screen series to a live stage show proves to have its limitations with this new offering from the pair. Promising an insight into the future via the usual blend of the duos stand-up, songs and appearances from their collection of guest characters, a strong start is weakened as the old songs are dished up amid a slapdash series sketches.

The attempt to squeeze in all their characters with as many songs as they can ruins the flow.

Fielding and Barratts alter egos of Vince Noir and Howard Moon kick the show off with some classic banter, including Vince sneakily making references to a new product he is being sponsored by causing Howard to get frustrated with him, which settles the crowd in nicely and a couple of odd heckles at the start bring out the best in them. Their comedy is highly effective whenever they are building up a story, and the appearance of Naboo and Bollo as a pair of pimps gives an amusing spin on their characters. It is their attempt to squeeze in their other characters, including far too much time for Bob Fossil (Fulcher), with as many songs as they can that ruins the flow.

Its understandable that Fielding and Barratt like to roll out the Boosh band so often — the popularity of their music numbers “Eels” and “I Did a Shit On Your Mum” have proved to be some of the most often-quoted elements of their work. Performing the songs on stage is a sure-fire crowd pleaser, though interspersing them throughout the performance breaks up any kind of rhythm. Unlike on television, they cant jump in and out of them mid-sketch and continue where theyve left off. Similarly, the short sections for Dennis and Rob Fossil feel added just to get them for fans than given any thought for the show. Howard does try to wrestle with the problems of the universe in his uniquely detailed way and Vince is his usual flouncey self, but beyond the first 20 minutes of solid material the Future Sailor Tour is too much of a hodge-podge of the elements already seen in their three television series to be a rewarding stage show that does anything more than scratch the surface of the pairs new ideas. Theres a lot of humour in The Mighty Boosh television series, Fielding and Barratt need to work on how to present it live on stage.