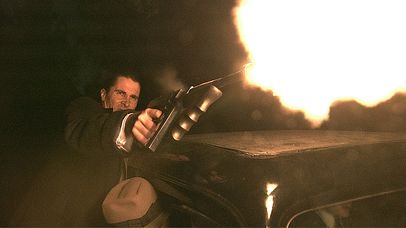 Whether wielding a bloodied axe in American Psycho, dropping 63 pounds for The Machinist or putting on over a 100 more to bulk up for Batman Begins, Christian Bale has constantly reigned in glowing reviews for his shape-shifting efforts, marking him as one of the most dedicated, complex and enigmatic leading-men of recent times.

This remarkable evolution was again on show in Bale’s latest film, Public Enemies, on DVD Blu-ray from November 2nd, in which he morphs into the character of FBI agent Harry ‘Pete’ Pierpont to hunt down and capture one of America’s most notorious criminals, John Dillinger (Johnny Depp).

While this complex actor is now reaping the rewards for his dedication to his craft, his sudden rise form art-house protegee to Hollywood prominence may have left you scratching your head wondering “where the heck did this British phenomenon come from?”. Well scratch no more, this is a journey through Christian Bale’s defining films to date.

Empire of the Sun (1987)
Christian Bale’s career took off when he was chosen by Steven Spielberg out of 4,000 hopefuls to play Jim Graham, a pampered upper-class British adolescent living in China. Shouldering the bulk of the movie Bale delivered a mature performance and was immediately hailed as ‘the next big thing’. However Bale didn’t take very well to his new celebrity status and early fractures with the press became evident when he refused to answer a barrage of questions from journalists while on a promotional tour, choosing to weird them out instead by repeatedly and silently stabbing an orange with a pen.

Little Women (1994)
The next eight years of Bale’s career would see him continually trying to live up to his new-found celebrity status, with roles in musical’s Newsies and Swing Kids both failing miserably. In need of a new break, Bale signed up to play the charismatic male presence in the estrogen-filled Little Women, and it was this film that really allowed audiences to fully embrace his charm and he soon found himself back in the lime light and wearing the ‘heart-throb’ label with ease.

!(feature_l)http://relayer.s3.amazonaws.com/articles/spreads/4c964a68c1531723a0000c81.jpg!American Psycho (2000)
After roles in a range of solid if unspectacular films, Bale quickly found himself in need of another chance at the big-time. It came in the shape of this blood-soaked satirical drama, for which Bale fought off unlikely competition from a post-Titanic Leonardo DiCaprio to play the films psychopathic lead — a banker on the brink, obsessed with his appearance, business cards and brutal murder. Bale’s intense, nuanced performance was certainly not for the faint of heart, however it did get him a quiet tip for an Oscar nomination.

Reign of Fire (2002)
Following his critical acclaim for American Psycho, Hollywood thought it was time to take a gamble on one of the industry’s rising stars. Cue the dragons, hire the pyrotechnics guys and enter a heavily-bearded Bale to save the day. The pressure was on for him to lead a big-budget film for the first time, and while his leather-clad grunge-pirate hero showed some promise, the film unfortunately didn’t and flopped. Bale’s reputation as a leading man was scorched in the process.

The Machinist (2004)
Fingers still burning from his ill-fated Hollywood venture, Bale would go back to finding niche scripts that allowed him to play out his true eccentricities. This time he forced himself to loose an astonishing 63 pounds in order to play a skeletal insomniac factory worker in this relentlessly disturbing affair. The film received mediocre reviews, however his performance again won him acclaim among fans and critics alike. His daring crash diet set off a new Hollywood craze for the cinematic metamorphosis — bring on the method.

!(feature_l)http://relayer.s3.amazonaws.com/articles/spreads/4c964a68c1531723a0000c82.jpg!Batman Begins (2005)
In a move that sent shockwaves through the comic community, Christopher Nolan asked a fairly unknown Bale if he would pick up the dishevelled bat cape and help him revive the failing Batman franchise. Not one to shy away from a challenge Bale eagerly accepted and went back to the gym in order to transform himself from barebones factory worker into beefcake Batman and boy what a session it was, as the Caped Crusader flew back stronger than ever to smash up everything in his path. The film went on to be a huge hit and earned every major cast member an Oscar nomination. Except Katie Holmes.

The Prestige (2006)
After successfully resurrecting Batman, Bale, Caine and Nolan teamed up again in this intense three-act magic trick, with Bale going head-to-head with another one of Hollywood’s “off-the-job” superheroes in the shape of Hugh Jackman. And there’s no doubt who wins this one, with Jackman’s performance being blunted by Bale’s powerful turn as Alfred Borden, one half of the competitive pair of magicians. It also stars David Bowie, who oddly looks like Ricky Gervais with a ‘tash.

3:10 to Yuma (2007)
Not content to sit on his laurels and soak up his recent praise, Bale quickly signed up to help resuscitate another one of Hollywood flat-ling genres in the form of James Mangold’s western remake, 3:10 to Yuma. The film saw Bale going at it head-to-head with another one of Hollywood’s A-listers, this time it was Russell Crowe providing a fine, nuanced performances that helped underscore a strong revisionist take on an old favourite.

The Dark Knight (2008)
For Bale, like the world’s box offices, 2008 would be dominated by one movie: The Dark Knight, a sequel to Batman Begins and a reunion with both Christopher Nolan and Heath Ledger. The entire cast produced an action packed movie, filled with real depth and atmosphere that changed critical perception of the comic movie genre as a whole. It also stormed its way into the box-office hall of fame, taking approximately one billion dollars worldwide!

Terminator Salvation (2009)
Bale’s decision to play John Connor in this post-apocalyptic action epic truly demonstrated his ascent to the top, as never before had a Hollywood actor been invited to play backto-back heroes in two film franchises of this scale. While the production was plagued by fanboy outcries, rumoured script changes and one legendary on-set tirade it would still manage to weather dismal reviews to top the UK box office, grossing a respectable £14 plus million in the process. 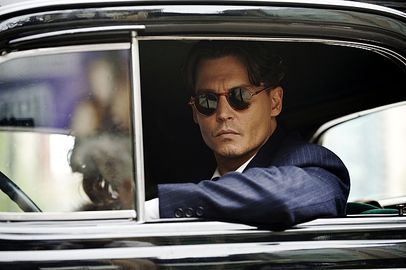 Public Enemies (2009)
With a barrage of quality scripts still flooding into his mailbox, Bale was quickly back in action after the disappointing fourth entry in the Terminator series, this time pitting his wits against Johnny Depp in Michael Mann’s Public Enemies. The film follows Bale’s character, FBI Special agent Melvin Purvis, as he chases down Johnny Depp’s legendary gangster, John Dillinger, in the crime-ridden 1930s. Another genre for Bale, and another hit.