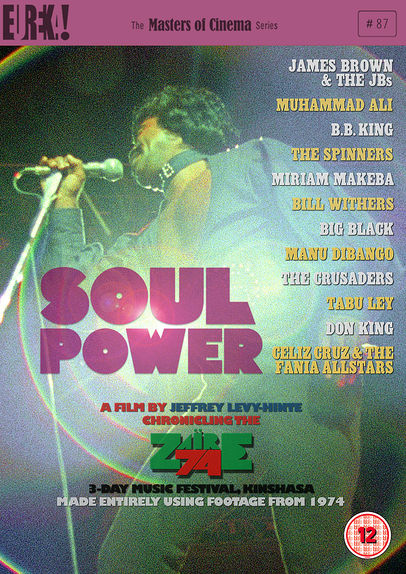 Soul Power is a verite documentary, entirely composed of footage shot in 1974 at the legendary music festival dubbed “Zaire ‘74” — a 12-hour, three-night long concert held in Kinshasa, Zaire. The pipe dream of musician Hugh Masekela and producer Stewart Levine, this music festival became a reality when they convinced boxing promoter Don King to combine the event with “The Rumble in the Jungle”, the epic fight between Muhammad Ali and George Foreman (chronicled in the Academy Award winning documentary When We Were Kings).

It shows the experiences and performances of such musical luminaries as James Brown, BB King, Bill Withers, Celia Cruz, Miriam Makeba, among a host of others. At the peak of their talents and the height of their careers, these artists were inspired by this return to their African roots, as well as the enthusiasm of the Zairian audience, to give the performances of their lives. The concert has achieved mythological significance as the definitive Africa(n)-American musical event of the 20th Century.

Soul Power is released on DVD and Blu-ray as part of the Masters of Cinema series by Eureka Entertainment on 16 November 2009. See http://www.soulpowerfilm.co.uk/ for more info. We have 3 copies of the DVD to give away though – email your zap bang! username and address to zapbangcomps(at)gmail(dot)com with the answer to the following question:

Who won the Rumble in the Jungle boxing match?