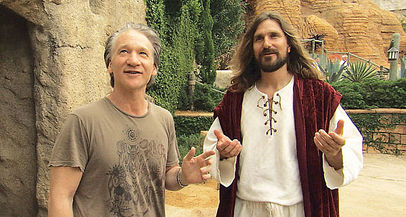 In cinemas from Friday April 3rd, Religulous is set to be one of the year’s most entertaining and controversial comedies.

From Larry Charles, the director of Borat, the film follows leading US comedian Bill Maher as he travels to Jerusalem, Egypt, London, Amsterdam, The Vatican and across the United States to meet true characters of the religious world and lift the lid on the ridiculous side of religion. Leaving no stone unturned, he meets talking snakes, extra-terrestrial travelers, Islamic rappers, and catches the natural highs of the Cannabis Ministries along the way.

To coincide with the release of Religulous, and with a dose of April Fool’s Day frivolity thrown in for good measure, here’s some of the greatest religious hoaxes of all time.

Jesus on a Dog’s Bum
Thanks to the miraculous powers of Photoshop, Jesus has been spotted appearing on everything from cider bottles to shrimp. In the latest in a long line of miraculous apparitions, the mighty Lord has chosen to turn up on the rear-end of a ginger dog’s hindquarters. Believers in this modern mystery have claimed that this apparition was “truly a holy event…” and it’s hard to disagree.
Read more

The Incredible Discovery of Noah’s Ark
American TV station CBS managed to fool an entire nation into believing that two crackpots had stumbled across the remains of Noah’s Ark when they aired a highly sensationalised special entitled “The Incredible Discovery of Noah’s Dinghy”. It turns out that all you really need to convince an entire nation that you’ve made a religious discovery is a broken piece of railroad track, a couple of tea bags (for aging) and a whole bucket-load of gullible.
Read more

Kinderhook Plates
The Kinderhook Plates were an archaeological hoax designed to embarrass the Mormons by tricking their leader into “translating” phony hieroglyphics inscribed on them. Thousands flocked to listen to the translations but soon found they did not support the Book of Mormon, but instead raised serious questions about their leader’s prophetic claims to be able to translate ancient languages. From Mormon to Moron in one fell swoop.
Read more

The Monita Secreta
An 18th century religious property scam that led to the old, the young, the poor and the rich handing over wads of cash in return for a raggedy book promising them increased and untold wealth, power and influence, faster than you can say “L. Ron Hubbard”.
Read more

Peter Popoff
This German-born U.S. televangelist was a man with a unique gift… for hiding a radio transmitter in his ear that allowed him to listen to his wife prompting him with his congregation’s intimate secrets. Not content with defrauding millions from an American audience, Peter Popoff recently appeared in the UK press advertising a free cross which contained “blessed water” and “holy sand”. Well, it might work – although the revelation that the blessed “holy” water was supposedly taken from a source near Chernobyl does little to support the theory.
Read more

Shroud of Turin
A piece of cloth (allegedly) used to wrap the crucified corpse of the Messiah, the Shroud of Turin, has now become a laughing stock amongst skeptics who lampoon its legitimacy on a number of levels, including the fact the notorious print measures Jesus at a whopping 6ft 9!
Read more

The Da Vinci Code
A literary attack on Catholicism, a majorly mediocre movie or simply a way to rake in millions from myth-mongering? Whatever you think of The Da Vinci Code one thing is for certain, Dan Brown has engineered a text that has got ministers, the masses and the media scampering all over the book that divided dinner parties up and down the nation.
Read more

Religulous is in cinemas from Friday, April 3.
www.religulousmovie.co.uk