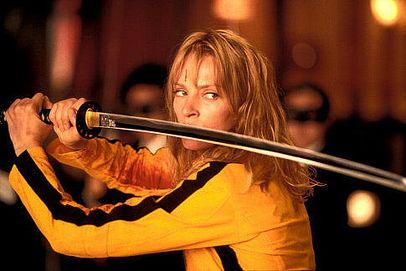 There haven’t been many films in recent years that have been able to match the bullet count or sheer enjoyment factor of Smokin’ Aces, in fact most recent action films have been more Romeo than Rambo. So if you’re an adrenaline junkie in need of a need fix then fear not as the Smokin’ Aces gang are back in the sequel Assassins’ Ball, out on DVD and Blu-ray on 25th January.

So to celebrate the release of this action spectacular, we’ve hunted down the 10 hottest female assassins in movie history…

La Femme Nikita (1990)
Anne Parillaud, arguably, portrayed the most convincing female assassin of all in this chic French thriller that makes the Bridget Fonda US remake look like an episode of Antiques Roadshow. Her transformation from street punk sentenced to death through to government snuff artist is startlingly handled by director Luc Besson, the feline Parillaud setting the bar high for future generations of wannabe killers.

The Quick and the Dead (1995)
Sharon Stone was still cashing in on the goodwill for her sultry Basic Instinct turn when she turned up in this underrated Western as glamorous gunslinger Ellen “The Lady”. Pitched opposite Gene Hackman’s snarling John Herod, Stone holds her own in the same screen space as future superstars Russell Crowe and Leonardo DiCaprio — her sassy revenge fuelled quick draw a sight to behold.

The Long Kiss Goodnight (1996)
One of the great guilty pleasures of recent times, Renny Harlin’s rollercoaster action flick paired a wise cracking Sammy Jackson with Geena Davis’ wholesome Mum Samantha Caine. When Caine discovers she was a former government assassin called Charly Baltimore, after a car accident jogs her memory back into place, the lead starts flying as the newly peroxided gun wrangler takes on the bad guys.

Underworld (2003)
We’re stretching the whole assassin angle here but, by Jove, you can see why when lovely Kate Beckinsale’s involved. Suiting up as fearless vampire warrior Selene, in a role not dissimilar to her Van Helsing turn, Blighty’s finest slices and dices her way through a fair chunk of screen time. She squeezed into the figure hugging costume for another outing in the sequel, before fellow Brit Rhona Mitra took over. 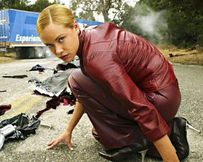 Terminator 3: Rise of the Machines (2003)
Statuesque New York native Kristanna Loken was more known for cheesy B-movie action romps than blockbusters when she took on the role of the robot assassin sent back from the future to mash up Nick Stahl’s John Connor in this decidedly average second sequel. Hats off to her though, because she oozed enough menace and exuded enough sex as the metal warping fuse box to keep audiences from kipping off.

Kill Bill 1 & 2 (2003/2004)
Quentin Tarantino elevated Uma Thurman into super chic territory, thanks to her turn in Pulp Fiction, however he went one better with this double header featuring the goddess Uma as The Bride. Left for dead by heartless Bill on her wedding day, the once pregnant assassin tracks down her five former colleagues in the Deadly Viper Assassination Squad in a balletic display of bloody revenge. Thurman rocks.

Aeon Flux (2005)
Before Charlize Theron started putting some razzle and dazzle in boring World Cup football draws, she took time out to star in this sci-fi flick that came and went from cinemas in the blink of one of her piercing eyes. Sent to assassinate mankind’s supposed saviour Trevor Goodchild (Marton Csokas), Theron’s Flux lights up the screen in skintight black spandex firing off bullets and barbs in prolific fashion.

Elektra (2005)
A cheeky spin off from Ben Affleck’s Daredevil, the mother of Benny Boy’s two children in real life (Jennifer Garner) took on the role of Elektra — a woman brought back from the grave by none other than Terence Stamp. How cool is that? Her biggest mission involves wiping out a father and his teenage daughter, only for Elektra to hand them a stay of execution before a series of other assassins try to cut down all three of them. 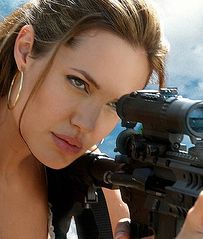 Wanted (2008)
Ange has got a couple of pretty damn successful assassins to her name already in the form of Mrs Smith, opposite beau Brad, and as bad-ass Fox in this frenetic actionfest alongside pretty boy James McAvoy. Part of the mysterious Fraternity, Ange’s uber cool bullet bender teaches McAvoy’s Wesley Gibson all he knows in the killing game as the duo face off against the dastardly Cross (Thomas Kretschmann).

Smokin’ Aces 2: Assassins’ Ball is out to buy on DVD and Blu-ray from Monday, January 25.