Do you want to win this Green Wing DVD? Yes you do. So read on… 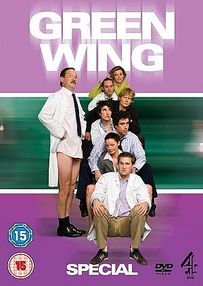 After two classic series, where did we leave off? Caroline (Tamsin Greig) is engaged to Guy (Stephen Mangan), Mac (Julian Rhind-Tutt) has little time left and Statham (Mark Heap) and Joanna (Pippa Haywood) are on the run; the hospital is in chaos, even more so than usual — so what happens next? Give yourself the chance to find out:

We are giving you a chance to win one of three copies that we’ve acquired here at zap! bang! of the Green Wing Special DVD. It contains a feature-length episode of the BAFTA award-winning leftfield comedy series as well as extras and it’s not available to buy until 8th January!

All we want you to do is email us at zapbang(at)zapbang.org telling us who your favourite Green Wing character is. It’s that easy. Entries will be accepted up until the end of Friday 29th December and winners notified shortly afterwards. Only one entry per person. Please make the subject heading ‘Green Wing Competition’ and include your zap! bang! username, real name and your address in case you are successful! The editors decision is final.