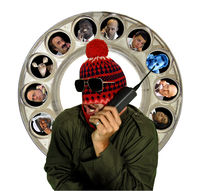 No, we know it’s not a film release, but us pranksters at _ zap! bang! Magazine _ do enjoy a bit of cold calling for hilarity sake — if only you’d heard us on the phone to Tom Cruise’s agent trying to wangle an exclusive interview the second Katie Holmes gave birth. Oh how we laughed as they hung up immediately! Anyway, to celebrate that particular occurance and the time we told the fire brigade an alien was trapped up a tree on April Fools’ Day, here’s the lowdown on Fonejacker series two featuring a host of new characters with video profiles.

Multi award-winning comedy Fonejacker is back from today on E4 at 10pm as the now notorious Kayvan Novak, whose identity is still protected by a red bobble hat, creates more prank-call havoc and confusion with his array of comedy characters. Returning favourites include George the African Scamster, Terry Tibbs the dodgy dealer, salesman Irish Mike and the abbreviation-talking ‘Mr Doovde’, alongside these newbies:

Dufrais
A single, middle-aged busybody and head of the Resident’s Association who thinks everybody else’s business is also his.

Stanley
A sweet schoolboy whose misguided requests to strangers are anything but innocent.

Barry Childs
The Warden at a Young Offenders Institute who tries to get people to come down and talk to his boys but invariably ends up scaring them off.

Jimmy Jon
An ‘Ozzie over Here’ who can’t go two minutes without bringing the conversation round to his favourite subject — sex.

Scouse Steve
An imprisoned scouser who uses his one phone call a week to try and land a decent job when he finally gets released.

Janec
A polish immigrant worker who doesn’t quite understand the British approach to privacy, manners or work ethics.

View their character profiles, clips and more details about the series at www.e4.com/fonejacker.