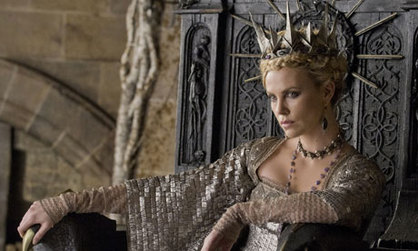 Charlize Theron is considered one of the most beautiful women in Hollywood and regularly tops “sexiest” polls around the globe. Labelled a Hollywood beauty, Charlize’s choice of roles have often disguised her stunning features or turned her appearance into a curse, the latter of which was used to full effect in her latest film Snow White and the Huntsman.

To celebrate the release of Snow White and the Huntsman on Blu-ray and DVD on Monday, October 1st we take a look at the films which Charlize Theron has used to redefine the notion of Hollywood beauty into something with more substance and heart.

!(feature_l)http://relayer.s3.amazonaws.com/articles/spreads/50637201dc6ebe0002000252.gif!The Devil’s Advocate (1997)
Charlize Theron’s break out role saw her play the tormented wife of a lawyer (Keanu Reeves) who is oblivious to the fact that he works for Lucifer (Al Pacino). Despite appearing alongside actors with far more experience, she managed not only to hold her own but to convincingly portray a formerly rational woman’s fall into delusion and paranoia. To prepare for this early dramatic role, Charlize visited a psychotherapist for three months to understand the harrowing disintegration of the mind and the effect it can have on appearance.

Mighty Joe Young (1998)
After taking on a number of critically-acclaimed edgy and dramatic characters, the family-friendly Mighty Joe Young brought Charlize into the mainstream. Her motherly persona in the Disney picture added another string to her already diverse bow and the warm performance she gives steals the show away from the 16 and a half foot ape she shares screen time with.

The Cider House Rules (1999)
In the charming The Cider House Rules, Candy (Charlize Theron) teaches Homer (Tobey Maguire) about life outside of the sheltered orphanage he grew up in. Set during World War II, Charlize plays the lonely girlfriend of a soldier in battle with conviction perfectly suited for the period and her character’s reaction pre and post-abortion is fraught with realistic emotion and inner-turmoil.

!(feature_r)http://relayer.s3.amazonaws.com/articles/spreads/50637230dc6ebe0002000253.jpg!Monster (2003)
Charlize Theron’s spectacular turn as the prostitute-turned-serial killer, Aileen Wuornos, is considered one of the greatest movie performances of all time. Catapulting her onto the A-list, Monster earned Charlize her first Oscar as audiences witnessed the naturally stunning actress disappear completely into the disturbing and unflattering role of a desperate woman on the edge of sanity.

North Country (2005)
Hiding her natural beauty once again, although not as dramatically, Charlize cemented the idea that she has the innate ability to take on powerful roles about unglamorous women in a man’s world. In North Country she becomes the fearless mine-worker that won the first sexual harassment case in American history with such compelling human detail that critics failed to fault her in the often difficult follow up major role.

!(feature_l)http://relayer.s3.amazonaws.com/articles/spreads/506372e1dc6ebe0002000254.jpg!Young Adult (2011)
Charlize uses her appearance to full effect in Young Adult, which tells the tale of a self-absorbed, destructive prom queen who has grown up, yet never let go of her high school glory years. In the gritty stand out role, her character is not particularly likeable, nor is she meant to be, but the Oscar-winner played the flawed part so realistically that critics commented on how unsettling the portrayal of a narcissistic, lonely woman was to experience.

Snow White and the Huntsman (2012)
In a role that demanded that she must be the “fairest of them all,” Charlize was perfectly cast as the soul-sucking beast beneath a beautiful exterior. Utilising her full range, her portrayal of the unbalanced Queen Ravenna flits from innocent victim, to evil schemer, to frenzied ruler with such unpredictability that it is no wonder that she instils fear into the hearts of every living thing around her with nothing more than a deliciously icy stare.

_Snow White and the Huntsman is on Blu-ray and DVD from 1st October. Pre-orders yours here