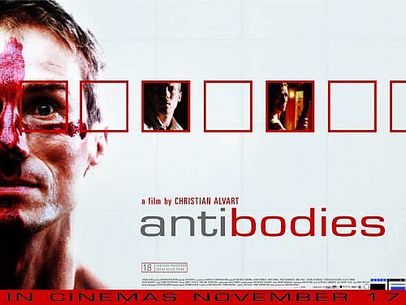 Evil mind games abound when a psychopath killer who paints surreal religious pictures with the blood of his victims is captured by police in German thriller Antibodies, out in the UK from Friday (November 17th). The authorities can prove that Gabriel Engel (André Hennicke) has slaughtered and abused a least a dozen boys, but village cop Michael Martens (Wotan Wilke Möhring) wants to know more. He believes his obsession with the brutal murder of a local teenage girl could be resolved by confronting Engel about the case in the hope of proving he committed the crime. However, things soon turn nasty as Martens is drawn into a world where good becomes evil.

Director Christian Alvart’s second feature looks set to be a dark and brooding crime horror story with a dash of action. Following a similar line to Silence of the Lambs (Jonathan Demme, 1991) in which the killer is safely behind bars yet fiendishly playing with the nerves of a police officer attempting to extract information from him, its blurring of the line between good and evil suggests it could even mirror the moral dilemma seen in Se7en (David Fincher, 1995).

Even though Engel tells Martens that he knows who killed the girl, that he witnessed the crime, it is not long before his mind games force Martens off the case. However, offered the chance to return it is not long before the shocking truth transforms Martens’ life into a living nightmare. For some truly gritty and hard-hitting action, this looks to be the film to see. Evil is a virus: get infected with Antibodies.

Antibodies is out in the UK from Friday, November 17th. Check out the trailer by following the links below:

For more informtaion about Antibodies visit the official site:
““:http://www.antibodiesthemovie.co.uk