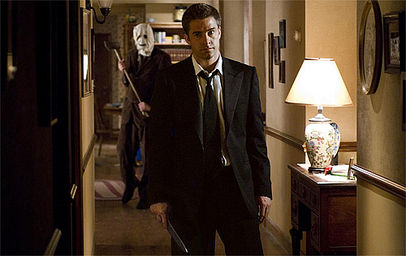 Horror film The Strangers is released on DVD from Boxing Day, once again proving that itis a cardinal rule of horror films that you mustn’t spend a night in a lonely, rural house. Yet year after year characters keep on doing it. We sum up 10 of the great isolated house chillers.

_ The Haunting _ (1963): The original and very much the best (forget about the 1999 remake) of the early haunted house thrillers saw a scientist and his team explore an alleged haunted house, with unsettling consequences.

_ Night of the Living Dead _ (1968): George A Romero launched himself with this seminal chiller as a group of ordinary country folk hide out from bloodthirsty zombies in a rural farmhouse.

_ The Texas Chainsaw Massacre _ (1974): A 70s classic: a group of young hippy types get into all sorts of trouble when they visit an elderly relative’s house in the middle of nowhere.

_ The Amityville Horror _ (1979): A young couple move into a house that seems possessed on the Long Island coast  the film that had the tagline “For God’s Sake, Get Out!”

_ Switchblade Romance _ (2003): A study break in an isolated French cottage turns into a living nightmare for two female students in this atmospheric creepy.

_ All The Boys Love Mandy Lane _ (2007): A classic set-up — a group of teens in a remote farmhouse — is given a fresh twist in this retro-tinged slasher.

_ The Orphanage _ (2007): A lonely mansion, masked children and shocks galore in this highly praised Spanish thriller.

_ The Strangers _ (2008): A young couple are terrorised by three masked assailants in a remote farmhouse: writer/director Bryan Bertino ramps up the tension and delivers one of the most unforgettable shocks in recent cinema.