Comic duo Robin and Partridge inaugurated the Old Vic Tunnels’ Screen Room Society with a night shrouded in secrecy until guests arrived on the night. All we were told is to bring a prop and dress appropriately to swear allegiance to one of four tribes: knights (in which case we had to take a sword), gnomes (beard), explorers (map) or tax inspectors (a packed lunch). As a motley crew of willing patrons, many of whom had gone all out with their fancy dress, arrived at the venue below Waterloo station’s railway tracks, they were ushered into a bar dressed up like a venue hidden deep in a forest. A wry sense of humour was already flowing with free Twiglets littering the place, invitations to fish plastic ducks out of a tiny plastic pond or make chalk drawings on the floor, before we were swept into the performing space and a uniquely quirky night of comedy and cabaret. 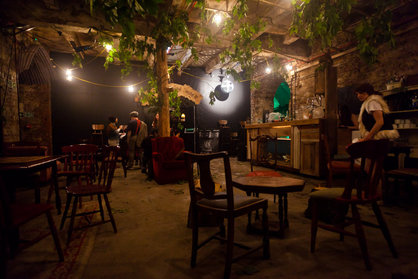 !(feature_l)http://relayer.s3.amazonaws.com/articles/spreads/4dec1915dbccc0000100001e.jpg!Robin and Partridge introduced the evening with Partridge dressed like a circus master of the forest while Robin had donned a cowboy jacket and native American headdress to act as the guides on an interactive journey. Each tribe was greeted and a member asked to stand up as a shining example to their clan, including a gnome with an impressive cotton wool beard, and they gave a war cry to each. The knights shouted “charge” as they thrust their swords in the air, the gnomes held their chins and cried “beard”, the tax inspectors banged on their packed lunch boxes and the explorers had a similar chant that escapes me now. It was a fine strategy to engage the audience who were now eager to get interactive and it wasn’t long before it was time for the audience to get on stage.

Robin dressed like a circus master of the forest while Partridge had donned a cowboy jacket and native American headdress to act as the guides on an interactive journey.

The first person called up was one the few who had not donned costume: a plain clothed individual – Olly – was plucked from row four and told he would need to be born of the wood to become one of the forest folk, leading to Robin and Partridge to ask for a member of each tribe to join them on stage. They each chose an element of the forest and a dance move, with the chosen tax inspector interestingly electing for papaya through the gesture of deer horns, to summon the spirit of the forest before forming a bark womb which Olly was ‘born’ through and another man fell through as the after birth. Surrealism at its finest, the imagination of Robin and Partridge always proves enchanting.

!(feature_r)http://relayer.s3.amazonaws.com/articles/spreads/4dec1953dbccc0000100001f.jpg!The pair went on to invite back members of the audience to take part in the first tribal game of the night – horse racing. Given coconuts to act as their horses Monty Python style and with carrots dangling from baseball caps as an incentive, the race included a French mime to jazz up proceedings and showed their ability to get everyone in the room on board with their madcap ways making for a successful start of the evening. As part of the first half of the show there was also a guest in the shape of spontaneous Scotsman Phil Kay.

!(feature_l)http://relayer.s3.amazonaws.com/articles/spreads/4dec196cdbccc00001000020.jpg!Bursting on stage from the aisle rather than the stage door he made straight for the front right corner of the stage. His brand of comedy takes on a life of its own depending on his environment. Looking much like he’d been living in the tunnels for months and was feverish at the chance to talk to people from outside, he marvelled at the audience’s enthusiasm to be on stage then took aim at the photographer sitting in the middle of the front row telling him to enjoy the show rather than take pictures. When the photographer wouldn’t let up, Kay straddled him, got in his face and then give him a full moon which would led to him scuttling off to a safe distance. Kay went on to invade the audience by clambering over seats and declaring he’d love to fuck a Lady Santa when he spied a female bearded gnome, then mix up a vintage cocktail of Red Stripe and rum before singing a ditty on his guitar that made a mockery of overblown male vocalists such as James Blunt and David Gray. At times shambolic and always outrageous, Kay’s cameo appearance was unpredictable and he left to a roar of approval.

Kay went on to invade the audience by clambering over seats and declaring he’d love to fuck a Lady Santa when he spied a female bearded gnome.

The second half of the Screening Room Society saw the high jinks continue as Robin and Partridge did a sketch which saw Robin’s impressive beatboxing skills command a Partridge mime before it was back to the interaction. This time they were joined on stage by home-grown talent from The Old Vic Tunnels to represent each tribe as they took turns to tell a story with the help of audience members offering key pieces of information to include such as “giant Africa toad”. Tribal members were eliminated if they failed to keep the story on track, resulting in a growing competitive streak between the tribes and a amusing tale of toads stuck in bathroom piping. Don’t ask.

!(feature_r)http://relayer.s3.amazonaws.com/articles/spreads/4dec1a5adbccc00001000021.jpg!The second guest of the night was comedienne Rachel Parris who took to the stage in a pink dress as Sleeping Beauty to sing about lost love and how you’re basically dead when you hit 30. Ever ready to slap a punchline in your face when you’re expecting another sweet sound from the sweet-faced Parris, her performance behind the keyboard was once of grace littered with foul-mouth asides delivered without ever looking like butter wouldn’t melt in her mouth. She was an excellent addition to the cast of the show and would return as a musical accomplice in the latter stages of the night.

Rachel Parris who took to the stage in a pink dress as Sleeping Beauty to sing about lost love and how you’re basically dead when you hit 30.

!(feature_l)http://relayer.s3.amazonaws.com/articles/spreads/4dec1a7bdbccc00001000022.jpg!Those latter stages returned to Robin and Partridge’s expert on-the-fly storytelling which saw them create a short love story involving Chitty Chitty Bang Bang’s Child Catcher and a pig farmer (if I recall correctly) which became a lewd encounter thanks to the two volunteers from the audience, though one was a wench so what can you expect? The winning tribe, the explorers, saw one of their representatives go on a journey for treasure via an overhead projector screen oft-used by Robin and Partridge, though perhaps in a less erratic way than when done with an member of the audience. Still, the explorer got to grips with their methods in the end and her finding the treasure was a rewarding moment for all.

And so ended the Screening Room Society’s debut show and what a joy it was to see Robin and Partridge conjure up such an imaginary space in the tunnels that you got lost in its zany ways. Their sometimes DIY look to their performances is all part of the charm and a sideways glance at the humour of what we do for fun. They know how to have fun, as did Parris in her Sleeping Beauty role and Kay as the crazy (and possibly drunk) man in the only independent pub in the forest (as Robin and Partridge claimed – apart from one that brews its own beer). Praise must also be handed to the efforts of the Old Vic Tunnels team who crafted the event with Robin and Partridge via workshops to get new blood involved. Bravo to all.