Street Art at the Flying Eye Ball Pop Up Shop 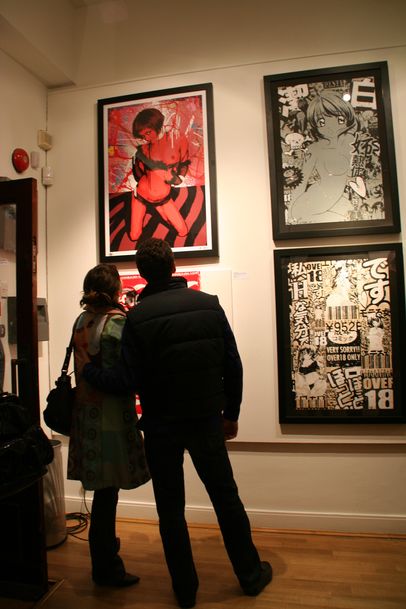 Contemporary street art has popped in Mayfair for the weekend as part of an exhibition aimed at displaying and selling some of the hottest works by the best artists producing cutting edge work today. The first Flying Eyeball production is an urban visual feast at 27 Cork Street in London until Sunday (December 12th) and with work from Shoe, Inkie, Eine, Mysterious Al, Sickboy, Insa, Zeus, Hush, Mau Mau, Kid Acne, Steff Plaetz, Chu, Shok 1, RYCA, it’s a must-see with the option to buy your favourite.

Stepping into this temporary show, your eyes are immediately drawn to RYCA’s “Acid Head”, gold leaf smilies beaming away at the far end of the upper floor. Putting the bling into a scene normally associated with grimy clubs, it’s a streetwise update for the music of Manchester in the early 1990s. Keith “Part2ism” Hopewell’s “Floral Skull” and “Line of Dissent” offer a views of life at opposite ends of the life cycle: the former a skull depicted by flowers, the latter a child’s head half white, half bloody white. For Part2ism it seems in death there is something beautiful and in life there is always a lingering fear of mortality.

!(feature_l)http://relayer.s3.amazonaws.com/articles/spreads/4c96498bc1531723a0000101.jpg!A basement room sees more commentary on popular culture with SHOK-1’s “Damian” making a mockery of Damian Hirst’s “Diamond Skull” by placing it on Damian from the film The Omen and Static’s “intergalactic Planetary” depicts a spaceman buying a Starbucks on the moon. With plenty more original art, including some impressive offerings from Inkie, Andy Council and Steff Plaetz, this exhibition is highly recommended and with the option to buy it’s unmissable for urban art collectors.

For more images from the exhibition see our photo special here.