Nicole Sclair has always been encouraged by her family to pursue her natural artistic flair. Her father Irv recognised her ability at a young age. Having dabbled himself in the arts world, as an actor, he wanted to ensure his daughter had the best of chances. Extra-Curricular art classes followed, where Nicole thrived. At school she was clearly aligned with art set. In a typical High School, social groups had hang out zones. It was here that Nicole first became Nikki. Nikki was never happier than in the studio, where her and her friends experimented with as many different mediums as possible. Post High School, Nicole won a place at New York’s prestigious Fashion Institute of Technology, where she graduated from with a degree in Fine Arts. Following graduation, Nicole’s work has been exhibited all over the place from 220 Gallery to Temple Beth-El and Hofstra to name but a few. This September, Wantagh’s The Cup plays host to her solo exhibition Untitled. zap! bang! took a moment to talk to Nicole about her forthcoming exhibition.

I think art today is seen in broader terms than it ever was before. There are so many mediums that are accepted as art today that in past centuries haven’t been. In a sense anything can be art.

You have experimented with different mediums, which has been your favourite?

I have always had an attracted to mixed media sculpture, especially using found objects. I remember going to the Met and seeing a surrealist exhibit with some incredible examples by Dali, Cornell, Oppenheim’s fur-cover saucer, and being really interested in the change in object association. My BFA Thesis was in mixed media sculpture. I built a 3 × 3 × 6 foot room filled with children’s kitchen furniture, drilling all of it into the floor so it could be flipped upside down. The viewer was supposed to sit inside and look up. The idea was to consider the mentality of what we remember our childhood to be, when all we were doing really was playing house and pretending to be grown-up. And again, I loved to watch people experience it; that’s what you have to do with that kind of art. But recently I’ve been working on my paintings, instead. I think the medium you use depends on the method you feel. Some days I want a photograph, other days I get inspired to do a plaster cast, or something.

*You studied at F.I.T (New York), what sort of grounding has that given to you?* 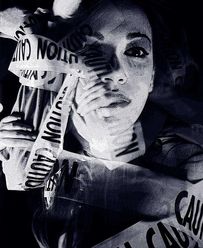 I felt completely encompassed by art. Even the math classes were visually/art related. I was lucky enough to be there just when they started the BFA program, so we were kind of the guinea pigs, but we were all very close. The same 25 of us had the same classes for four years by then, and the teachers were probably sometimes more enthusiastic about our work than we were. I think their encouragement and experience just made us believe we could actually do it, be artists, I mean, as long as we loved our work.

What artists have inspired you?

There are so many. I really admire Marina Abramovic, she does performances pieces I could never do, she’s very experimental and controversial but she really believes in herself and I admire that. I saw her in her piece The House with the Ocean View, and she was incredible. And I adore Kiki Smith, she is one of those artists that works in multiple mediums, yet her style is still recognizable and the public accepts her work in all forms, which is tough, I think many times an artist gets boxed into one medium as a painter, etc, and it is difficult to break out. But I also like a lot of Surrealists, like Hans Bellmer, and then there’s Artemesia Gentileschi, the Italian Renaissance painter and possible first feminist.

I take inspiration from various sources that change depending on the medium I’m using and the topic. I would compare the majority of my sculpture to that of the Surrealists that took advantage of found objects/mixed media, but the first influence for my paintings were actually the Hippie buses of the 1970s, like the artwork on the Merry Pranksters bus, and a lot of art of that era. It gradually began to resemble a system, where each piece was affecting and changing something else, and I began looking towards Kiki Smith, Salvador Dali, and a few others. But Irving Penn inspires my photography.

What do you think has been your most ambitious project to date?

Definitely my BFA Thesis, Home, when I built the room. What made it more time consuming was that I had to plan out before building how to take it apart and put it back together in six parts so it would fit through doorways and could be transported. It was a lot of trial and error; the process was definitely different and more piecemeal than other stuff I’ve done. And the costs of supplies; I was basically working weekends so I can put all the money into more supplies that Monday. But in the end, when it was all together, it was well worth it. I don’t think that much sweat has gone into any other project before or since; it was a labour of love, and now it’s complete, displayed in my dad’s garage, haha.

*Are you a believer that art can impact on society, or do you see it more as a simple reflection of what the artist sees?* 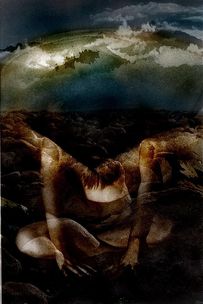 I do believe that an artist can impact society, but I think first and foremost their work should focus on being a reflection of what the artist is and/or sees. Art is a release, right, a way to get your thoughts and questions and curiosities visualized. We can hope it makes a difference in society, but satisfying what I want from my work comes first.

Your recent work looks at the body as a machine, why did you choose to study the body in this way?

I didn’t plan it, it began to form that way, I suspect from spending so many years admiring Smith’s body systems she created. The body is a machine, and it’s pretty amazing, if you stop to think about it, it works longer than the machines humans can create. Needs an oil change every now and then, but each piece serves such a unique function. Think of it piece by piece; arms and hands, the function of breasts, I felt the need to break them down into single pieces in my paintings. It made them stand out as a mechanical object more than if I represented the human body as a whole.

Do you have a personal message you are trying to convey?

I want my works to make people think, to come back and find something different or new. They don’t have to come to any conclusions, but like it when people pick out specific pieces of my work they find familiar or comforting. Then I know at least a part of my work is going to stay with them. I’m not trying to convey the body as sexual; that is not my intention, I hope that’s clear when you view my work as a whole; the body pieces are intertwined, but not necessarily emphasized overall. I do think of friends and people I care about and place objects for them in my work, not necessarily obviously, but theyre not meant as private jokes, either. That’s my comfort and familiarity in my work.

I didn’t want anyone to approach the collection with any previous assumptions based on titles, so I stuck with Untitled and numbered them in the other they were created. I do believe the numbering is appropriate, as I enjoy seeing the change in time in an artists work, and I would love someone to see it in mine. I have started giving simple names to newer works, honestly because I began to lose track of the Untitled Numbers!

My intention is to just keep making art! And hope that people who view it enjoy it.

Is the body as a machine an ongoing project, or will you be moving on to a new subject area after Septembers exhibition?

I’m not sure where I will be going, I’m rather happy continuing to work in this method, and when it is perfected, or becomes monotonous, or I find I can’t get anything else out of it, I’d like to see a shift, but I’d rather not plan it; I’ll approach it when the time comes.

People are also a focus of your photography. Do you feel different mediums allow for different explorations of the human form?

Absolutely! That’s why I find it sad when artists get boxed into one medium. It limits their possibilities that they could be experiencing in other forms. My photography and printmaking are very similar to each other, but very different from my paintings, which are very different from my sculptures. I don’t use the human form as much in my sculptures. The process for each medium is different, which also affects the outcome. A painting could take me forty hours of constantly sketching and painting. A sculpture could take me a few minutes to come up with it’s purpose and design, but months of finding the perfect pieces. A photo could be perfect as soon as I’ve taken it, or might need a bit of tweaking to satisfy me. I think of all the mediums photography is seen as the most sexual, and if that is what you take from it, fine, but that’s not my intention. Many of my photographs of the body are similar to my paintings in that they show only parts but not the whole. For this I was inspired by Irving Penn’s Earthly Bodies, which I’m grateful I got to see firsthand. So they all serve different functions.

Can you tell me a bit more about your forthcoming exhibition?

It will be at The Cup, a coffeehouse in Wantagh, New York, for the month of September. 3268 Railroad Ave. Wantagh, New York 11793. The paintings I’ll be showing will be new paintings, in relatively the same style as my other works, except for a few small natural changes that I’m not sure anyone will notice, but they make me happy. I’m excited to see my works in that setting, and to see people’s reactions.

I will photograph it and have it posted on my Facebook page as well as my Facebook Fan Page.

What can we expect from Nikki Sclair in the future?

My intention is to just keep making art! And hope that people who view it enjoy it.