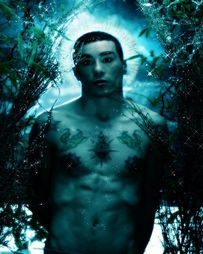 Juan Diaz, a born in Scotland in 1977, spent his childhood creating animated films and photographing his friends dressed as Hollywood stars. Now, London-based, he works with international icons such as his friend Grace Jones. Armed with natural talent, a bright and engaging personality, Juan brings a vivacious energy and a strong sense of individuality to all of his work.

Juan’s work ranges from painting, photography and urban street art and has modelled for the worldwide renowned French artist duo, Pierre et Gilles. Besides the tableaux-vivant in which he appears are the highlights of their current exhibition “Wonderful Town” in Paris.

At first glance, Juan Diaz’s painterly photographic masterpieces exert an intense visual power that leaves the viewer spellbound. Specialising in portraiture, Juan creates flawless fantasy, rich and vibrant with sensuality and eroticism, which explores the notions of dreams, spirituality and inner desires. Using these surreal concepts his work is aesthetically stylistic and striking with beauty and his mixed media approach gives a seamless effect. His personal pantheon is peopled by stars from the worlds of pop, fashion, art and cinema. 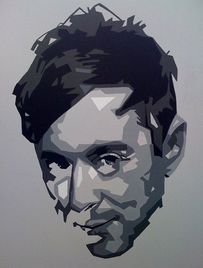 What is your interpretation of the word “art”?
Art to me is anything visual that’s created for expression. Implicit in my work is the idea that an artist’s sacrifice and personal investment is a necessary condition of art.

Are you a believer that art can impact on society, or do you see it more as a simple reflection of what the artist sees?
Definitely, art can have a huge impact on society. Arts all around us, whether we like it or not, in magazines advertisement and food packaging, music, and even clothes. So art effects on society are often very leading. 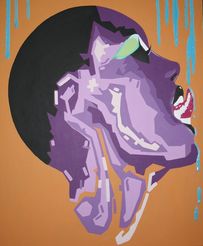 What would you consider as your great influences
Music is my first great influence. I first met Grace Jones in Glasgow via her son Paulo who saw some of my paintings online and so I was bowled over when I got an invite to them. I always loved Grace’s music and her collaborations with her former husband, French artist Jean-Paul Goude, for photos and video-clips commercials. To know that she has my work on her walls at home is a huge honour. Just now, I’m painting her son Paulo again and her brother Christian and their music is a gift to the world truly magical. 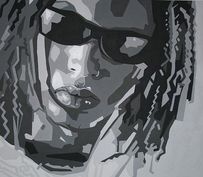 Can you tell me about your background as a photographer? How did you get into it ?
I was encouraged me to take photos at school. I won an art prize as a child and I got a Pierre et Gilles’ photos book: it was so inspiring to see images that I could relate to in this flawless form, it was so easy on the eyes and made me feel strong emotions. I don’t think I’ve come across work since that had the same power. I don’t consider myself as a photographer because most of the images for me arrive in Photoshop after in which I’m a master.

Is painting your only artistic outlet?
Painting is my first medium of expression, when I’m painting it’s like meditation. I lock myself away with my paints and music and can be like this all day and night. I like to paint until completion if I can.

As an actor, I filmed My Life as a Bus Stop in 2006-07, which was screened in theatres as part on the Edinburgh International Film festival 2007. I played the leading role (Luna Sea), it was such a joy to collaborated with Wilma Smith for this movie. It’s so clear in the comedy that we had so much fun. We were nominated for the Michael Powe Award and Best actor Award. Wilma has just finished filming her later feature called Cola Dan, which will be screened early 2010. This is her first solo venture in film and I play a schoolboy. It’s still another Scottish black comedy. Wilma has shown me a few sneaked previews and it looks excellent and funny. She’s an amazing writer and director, and she casts her roles perfectly.

What has prompted the Wilma Smith collaboration?
Wilma Smith and I went to school together. We began making animated films together from the age of 11, and when we left school, Wilma went on to study film and photography and I went to study acting at stage school. So it was only natural that we would eventually collaborate when she started to film. I’m so proud of her achievements and awards for Scottish film.

Do you have a personal message you are trying to convey?
Yes, but it’s just too difficult for me to put into a piece of work. I’m sure one day I’ll be able to convey my message properly. But for now, I opt for physical beauty in my work as opposed to painting the soul, glowing and shiny. I’m still working on how to bring it through. 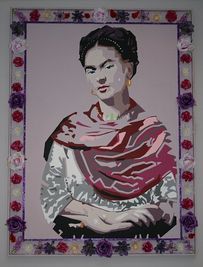 There are always some religious references in your work. Please explain…
I paint the Sacred Heart a lot, and it’s featured in many of my paintings. As an image it holds so much pain suffering sorrow, but shines with light and love and compassion. I believe it’s one of the strongest images we have on our earth.

And potential collaborators or muses, how can they reach you?

I’m pretty reachable, I use Facebook, Myspace as well as my own website. I’d really love to paint again the French actor Francois Sagat, and I hope to do a Karl Lagerfeld’s portrait. Somebody asked me in Paris why I paint so many icons. But I’m painting them through personal choice they are either people who have inspired me or people I like the face of. I paint them for me and if others like them bonus.

Have you already got an idea or a project that you would like to work on next?
My head is so crammed with future ideas, and my style is constantly changing. My dream is to exhibit my arts in Paris and in New York. I’d love to work with the French fashion designer Jean-Paul Gaultier. His shows are pure theatre and so nostalgic often. I always loved his approach to fashion and his advertisements for his ranges were always stunning. My main goal for 2010 is also to get a charity involved and donate some money through my work to orphanages, because I was adopted at seven.

Where is your work leading you now?
Who knows where I’m being led. I’m not sure sometimes. I think it’s going in one direction and then without notice I’m sprung from a different angle; so it’s totally organic.

Is your work easily accessible?
At the moment I’ve got most of my stuff on Facebook groups. I will be setting up a site ( www.juano.co.uk) as I get the time! For now, I’ll be selling my stuff online ( www.2020art.com). I’ve also got a profile on ModelMayhem where I’ve been in touch with a few people who want to collaborate.

My work is all over the net it can be seen at the following addresses, not only my art work but my work as a model, and in film.